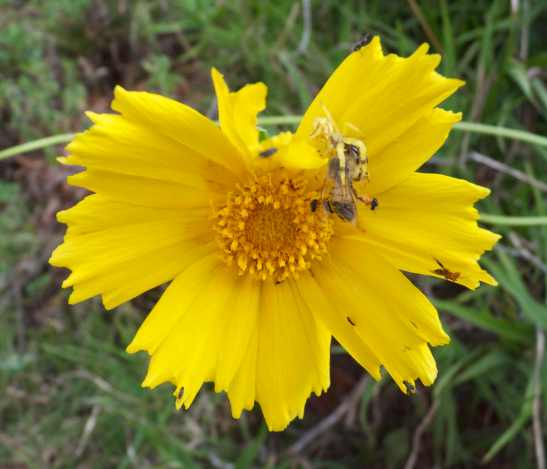 The yellow spider holding the bee. The small flies can be seen in different areas of the flower and the small male spider with its fly prey is on the right of the flower.

Walking in the garden I saw a bee collecting pollen on a yellow flower. Nothing strange about that you may think as there are beehives all over the place. However, about four hours later, the bee was still there and it was there still the following day. Clearly, further investigation was required.

Upon closer inspection I could see that  the now dead bee was being held by a rather small yellow spider, mimicking perfectly the colour of the flower and now busy sucking the bee’s body juices. Interestingly, there were also tiny flies on the flower, attracted by the mini carnage and, on further observation, a very small brown spider had caught one and it was also feeding on it. When disturbed, it left the fly and moved to the underside of the flower. My hasty conclusion was that the small spider was a commensal, taking advantage of the flies attracted by the dead bee.

After a bit of research and reading, the picture got clearer. The larger spider was a female Yellow Crab Spider (Thomisus sp.). This is not a rare spider so I was a bit disappointed. Then the following question was: what would it do when the flower dies as there were no other similar flowers nearby? It seemed rather obvious that the survival chances of such a brightly coloured animal would not be too good! I learnt a bit more about this as well! Once the flower dries, the spider moves off and it is able to change colour again to camouflage itself to its new surroundings. The wonders of nature strike again!

Oh, by the way, the tiny spider sharing the flower was not a commensal but the male spider that, in view of the size difference, I am sure it does well to inhabit the other side of the flower. That is exactly what I would do…