The desert roses at Swimuwini Rest Camp were spectacular.

From Gonarezhou to South Africa

29/7/14 – After another good night’s sleep we were up and ready to go by 08:30 hours. We set off towards Rutenga and the dreaded Beitbridge, the infamous border crossing. We said farewell to our nice and helpful camp attendant Fungisai Shava and co-workers. The weather was chilly and there was a tenuous drizzle.

At some distance from the camp we started coming across elephant paths and fresh spoor and, while speculating about the reasons, we came across a small road leading to a pan with lots of water. I believe it to be Nyamugwe but it requires confirmation. Despite its water abundance and plentiful traces of elephants, it was completely devoid of mammals. Clearly the trend in the area is for most animals to move at night. It was then back to the main road without another stop as time was passing 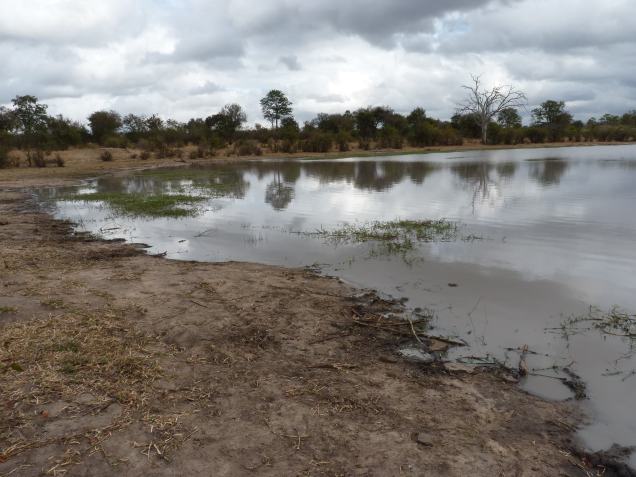 Copious elephant spoor took us to this pan that was empty.

This rubbing tree trunk confirmed that elephants visited the pan, probably at night.

Before leaving Harare my wife learnt through the Bambazoke Nhasi web newsletter that the Tourism Authority of the Zimbabwe Government offered a free service to assist you at the border crossing as this can, sometimes, take several hours. I am not a good queue person and the ones at border posts are not my scene as I get upset and do not enjoy them at all. This time, however, we had already pre-booked the Tourism Authority assistance and made an appointment for 14:00 hs at the border. We had names and cell phone numbers so with this helpful “shield” the border crossing was out of my mind!

We drove back to Rutenga through the dirt road where, again traffic was absent although this time we met 100 per cent more traffic than before: one pickup, loaded with cotton. We did hit a number of rather large potholes but reached the asphalt unscathed, only dusty.

Leaving Mabalauta the railroad is crossed prior to reaching the main road. 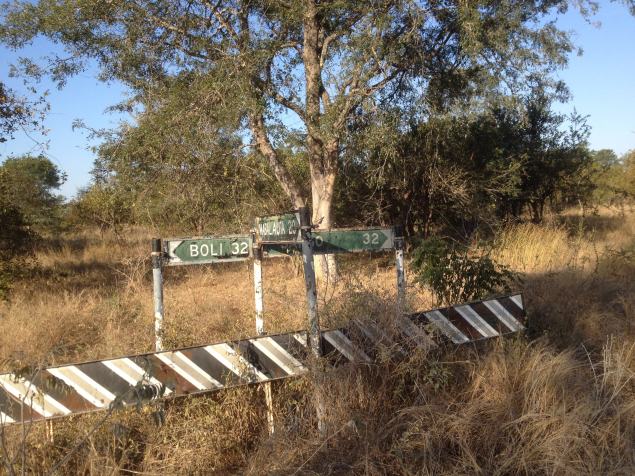 The first road junction leaving Mabalauta. Rutenga (via Boli) to the left and Mozambique to the right.

As agreed, about 40 kilometres from Beitbridge, I called Tourism and I was told that there was a person already at the border and, after contacting him we agreed to talk later at the border itself. Not what I expected for a supposedly “excellent service” I thought but kept the reflection to myself as we continued. About one hour later, already in Beitbridge, as agreed, we phoned again only to be told that the person was busy with other clients and he could not be with us! All of a sudden the “border terror” assaulted me big-time on hearing the bad news and I did not want to cross. Luckily my wife persuaded me to attempt it while I was thinking of plan B, a deviation through Botswana!!!

Gathering my wits as well as I could I entered the buildings and was welcomed by no queues! “We are in the wrong place” I said, and went to ask at a window but, relief of all reliefs, we were at the right spot and, five minutes later, yes five minutes later, we were through immigration, customs, police and free to go! The same happened on the South African side: 10 minutes (because of the use of a more advanced computer system!) and off we went. No need to search for psychiatric backup but only to drive on! So easy was it that I kept waiting for something to go wrong for a few kilometers after the border but nothing did…

As we crossed so fast we now had extra time on our hands and decided to push on to Louis Trichardt as we find Musina -like most border towns- rather unattractive and even unsafe. So we happily drove on and got to Louis Trichardt by mid-afternoon, with sufficient time for some shopping for our sojourn to Kruger National Park and hoping to find a nice place to stay. As we did not know the town, I decided to ask a customer in the supermarket for a hotel and she sent us to one nearby that was clean and quiet, she said.

It was a small pub with four rooms that looked OK but that really was not. The place was being refurbished so parking space was severely reduced and the hot water was very limited and finished before both of us could have our showers. Food came in small portions, particularly my wife’s quarter chicken that was as she defined “quarter pigeon”! In addition, the floor of the dining room shook and squeaked very badly when patrons and waiters walked by and making knife and fork use a real hazard. The waitress also squeaked not to be left out! That they served us the best mashed sweet potato that we ever tasted, I am afraid, was not sufficient to offset all other inconveniences.

I was sure that such an easy border crossing could not end well! Next time I will contact Psychiatrics Anonymous to prepare me for both: bad borders and poor quality hotels!