The events described were observed at Masuma Dam in the Hwange National Park. The dam is about 120m by 100m and it has a roughly oval shape. Water is continuously pumped to the dam from a nearby borehole making it an essential water source for the animal population in the surrounding area.

The time of the observations -13 to 16 October 2014- correspond to the end of the dry season. Elephants, Greater Kudus, Waterbucks, Impalas, Zebras and Warthogs were regular visitors, together with large flocks of Guinea Fowls and Vultures, to name the most frequent and common. We also counted 16 Hippos and six Crocodiles.

The preferred drinking place was a small bay located towards the Southern part of the dam (seen on the left of the picture above, at the back where some Impalas can also be seen). Most antelopes drank from there, particularly the Impalas that would come throughout the day in herds of various sizes. The figure below shows a typical drinking scene in that bay.

A herd of Impalas drinking at the dam.

As soon as a herd started to drink, usually one of the Crocodiles would swim towards them. They did so in full view of the antelopes and stopped at about 1 to 1.5 metres from them.

On seeing this the impala would withdraw from the water’s edge for a short time but gradually calm down and return to the water’s edge to resume their drinking. The crocodile would remain immobile for a few minutes and then slowly submerge and, eventually, disappear completely. 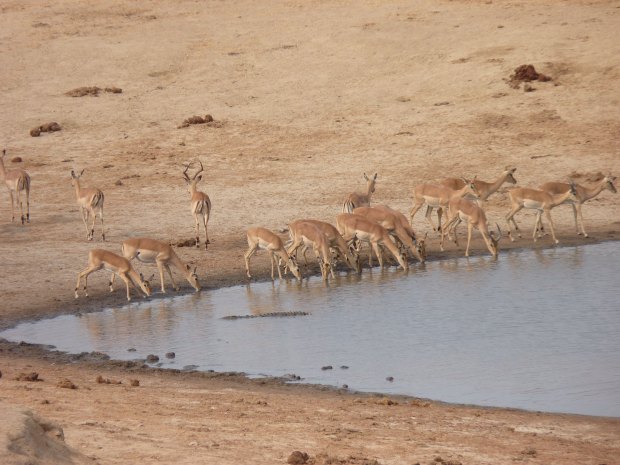 The Crocodile starts to sink. 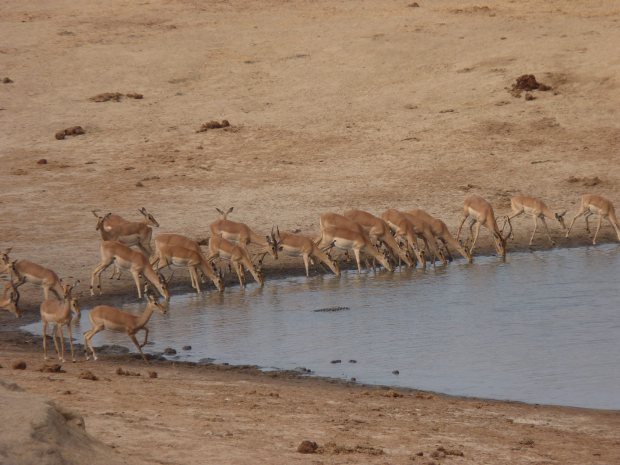 The Crocodile is barely visible now and about to disappear.

What followed next was really unpredictable. With the Crocodile (we assume that there is only one!) submerged the Impalas would continue to drink, although very fretfully. Most of the time, the Impalas will get their fill and move off without incident. However, approximately two or three times in a morning a sudden swirl in the water will be the only thing that preceded a violent attack by a Crocodile by lounging itself at the Impalas, moving its head sideways while biting in an attempt at catching one. 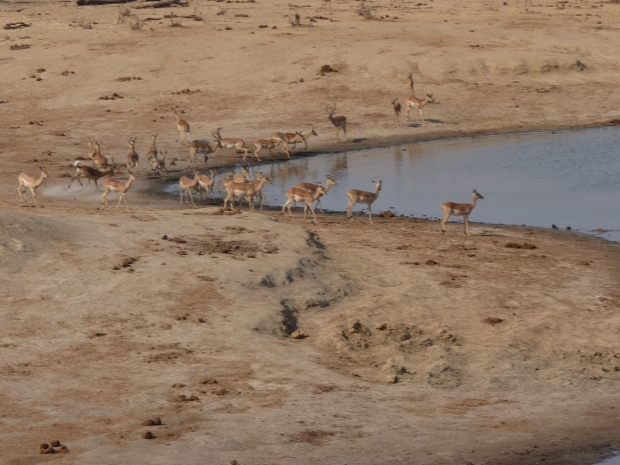 The Impalas’ first reaction at seeing the water starting to move.

As soon as the impala saw the water movement preceding the attack, they scattered in all directions, including jumping into the water in order to avoid the Crocodile.

The Crocodile attack is taking place, the Impalas scatter in all directions, including into the water becoming very vulnerable. 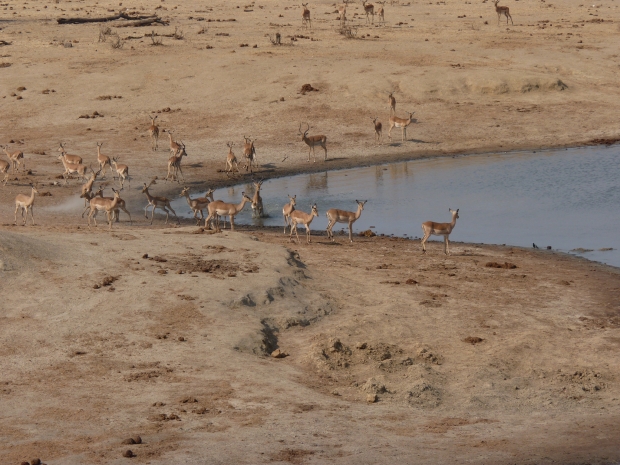 The Impalas escaped the attack this time, including the male inside the water.

The most common outcome was that the crocodile(s) failed and went back to the water empty-jawed.

The Crocodile returns to the water after the failed attack.

On two occasions, however, animals were caught. We witnessed one kill while the other one took place just before our arrival and saw the Crocodile swimming with the dead antelope. The Impala we saw was a young animal and it was caught from a foreleg. After a short struggle it was quickly drowned.

A Crocodile swims away carrying the Impala. 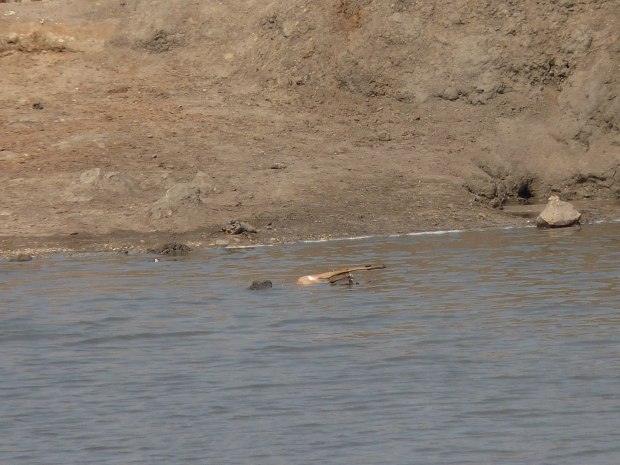 The Crocodile holding the impala after drowning it.

During the time we were at the dam, the Crocodiles caught two Impalas out of eight attacks witnessed.

There was also an extremely interesting follow-up to the kills but for that you will need to wait for a while!!!