Our first stop during our afternoon game drive from Gwaya after setting up camp came quite soon. In fact, we stopped while we were still in the campsite grounds. I did a kind of emergency stop to the surprise of my companions that were still settling down for the drive. Startled, they looked around but could not see nothing so, I am sure, they waited for one of my jokes as I do have a reputation! After a while I heard “This is one of your jokes right?” coming from Tom, but I was (quite) serious. 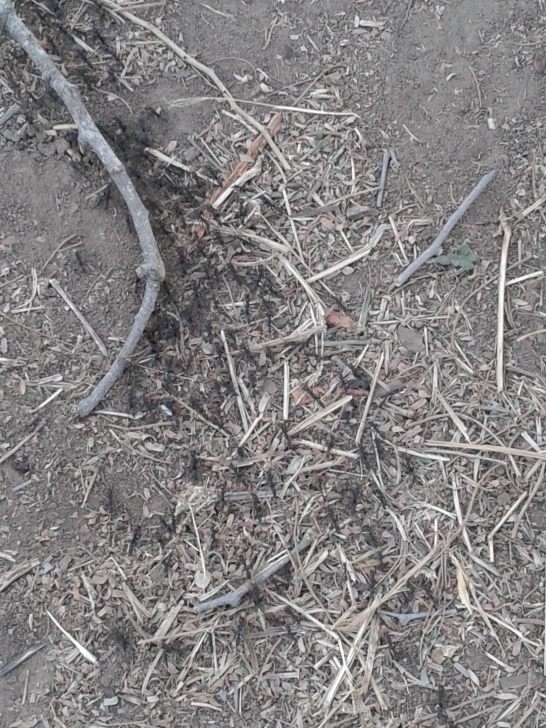 The only picture of the ants, taken by my wife.

I had spotted a column of Matabele ants[1] crossing the track. We had seen these ants in action earlier in Zimbabwe while entering termite nests and, after a while, emerging with bundles of termites in their jaws, both workers and soldiers! These are specialized ants as they feed exclusively on termites, leaving their colony “en masse” to search for termite nests where they will all enter and attack the nest carrying their victims back to their colony. They normally raid at dawn and dusk so we were probably seeing an evening raid returning home empty-jawed.

When disturbed these ants emit a high pitch squeaking sound that we have not heard from others such as the safari ants or siafu (Dorylus sp.) of East Africa or the leaf cutting ants we have in South America. For this reason, when the ex President of Uruguay Pepe Mujica mentioned that ants whispered in his ear while spending two years at the bottom of a well during his prison sentence, I had no difficulty in believing his words!

The ones we found were carrying their eggs and young and there were not more than three hundred individuals, organized in a thick column. They were moving like an army and entering a hollow dead tree trunk, probably their nest. At the time of the observation I was reading Conn Iggulden’s Genghis Khan series and their behaviour reminded me to the Mongol raiding tactics!

When we were about to leave them to spend the night in their nest we noticed about twenty ants bringing the rear. At first we thought that these were the old and injured, struggling to keep up. But their behaviour seemed odd! They were not moving slowly or lacked any legs! They were performing an activity that was part of their moving strategy. They were clearly following the trail of the group but they were picking up sticks, leaves and other debris and moving them slightly as if trying to “restore” the path they group had trodden to its original condition!

As this seems far-fetched, perhaps they were just either erasing their earlier pheromone trail or releasing new ones to indicate their presence to other creatures?

Once these “strugglers” reached the hollow trunk, they also got inside to join the others. They were in for a hungry night.

[1] Megaponera analis, one of the world’s largest ants are named after the fierce Matabele warriors.