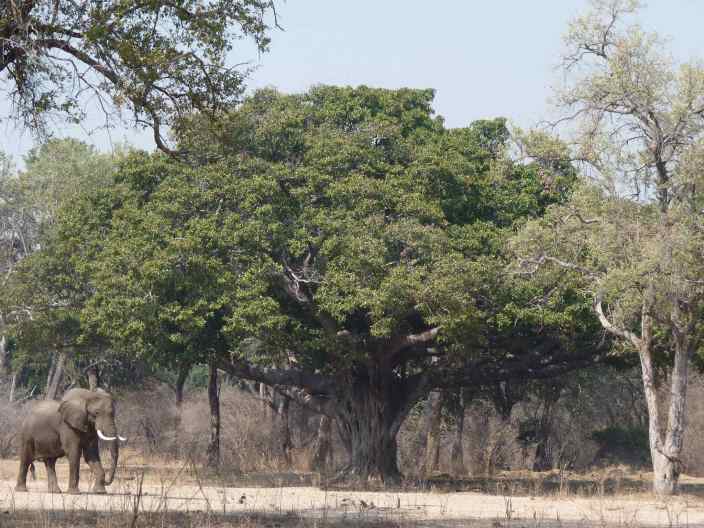 I said earlier that I am not a botanist and I am interested in the animal rather than the plant world. However, a visit to Mana Pools National Park would not be complete without spending time “tree-watching” . Here I present some facts that I trust you will find of interest.

It’s difficult to describe the various Mana Pools’ habitats. They range from clumps of green Natal mahogany (Trichilia emetica), Sausage trees (Kigelia africana) and Zambezi fig trees (Ficus bussei) to the rather sparsely populated Apple ring acacia (Faidherbia albida) woodlands, not to mention the areas of dense bush (known in this region as “jesse”) found further inland in the hillier parts. The result is an amazing, if rather fragile, bio-diverse habitat that many animals share, including more than 300 bird species. The above pictures, hopefully give you a better idea of what I fail to describe!

Although the experts list many tree species, the uninitiated (like me) feel attracted by the most striking ones. The Apple ring acacia trees are the main species of the riverine Mana Pools’ woodlands scattered all over the flat plains. They are large trees that, with time, develop a characteristic knobby trunk and as mentioned in an earlier post, they produce pods rich in protein that constitute important food for the animals during the dry season. Regrettably, a friend told me that for some reason they have stopped multiplying. This is rather surprising as the seeds are found all over the place. 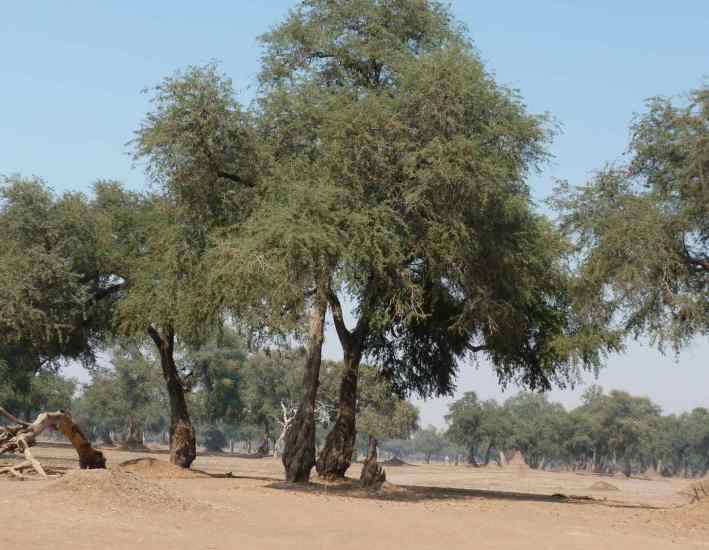 The large Sausage trees were beginning to produce their strings of strongly scented dark red flowers. Many animals, including monkeys, also consume them. I remember seeing buffalo sniffing the ground for long periods at dusk at the campsite in Mana Pools on an earlier visit and to wonder what they were doing. It was only after a while that I realized that they were feeding on the Sausage tree flowers that had dropped to the otherwise dusty ground. Its fruits -rather large sausages weighing up to several kg- develop later on during the year, and various animals such as baboons, elephants and hippos consume them, while people also use them in beer brewing.

The Natal mahogany are large, dark green trees whose crowns in Mana Pools show a characteristic bottom foliage with an evenly trimmed horizontal lower edge, which is an example of the wild art of the master topiarist-browsers that feed on them, among whom are impala and greater kudu.

Can a human achieve such trim?

All trees complement each other to achieve this beautiful landscape. However, and perhaps surprisingly to the reader, there is a silent and long-term tree war being waged while we watch… I am not talking about Lord of the Rings’ Ents but rather a combination of several battles being fought by stationary trees since time immemorial. It all starts with a bird or monkey feeding on a fig and dropping its seeds in a suitable place up a tree, where a hollow filled with soil allows germination to take place. 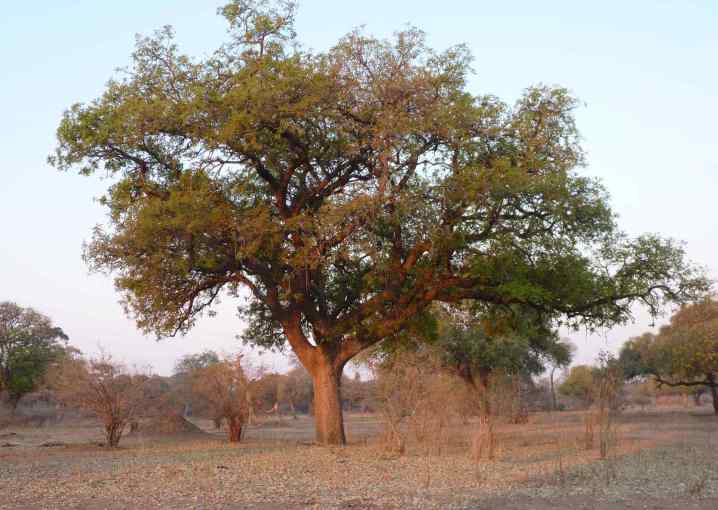 Good eyes are needed to spot the “enemy”…

A further close-up reveals the birth of a Zambezi fig tree.

Soon, an innocent-looking two-leaf seedling appears. After consolidating itself, it starts sending down aerial roots that surround the host tree and that will eventually reach the ground to bury themselves, becoming true roots. The fig tree uses the host to gain support and structure in its growth; the host is like a guiding stick similar to those used to support grapevines or tomato plants. In their quest for support and with their uncanny ability to survive in the most unlikely places, fig trees produce natural sculptural Masterpieces that occasionally damage ruins, which is an entirely different problem.

Fig tree growth can even crack rocks and buildings.

At some stage during the battle, it seems as if the two trees coexist naturally, adding great beauty to the forest. However, the process continues inexorably and the invader eventually strangles the host tree. This is purely mechanical as the pressure applied is such that it has the same effect as if the host tree would be ring-barked, interrupting the flow of water and nutrients between roots and the rest. 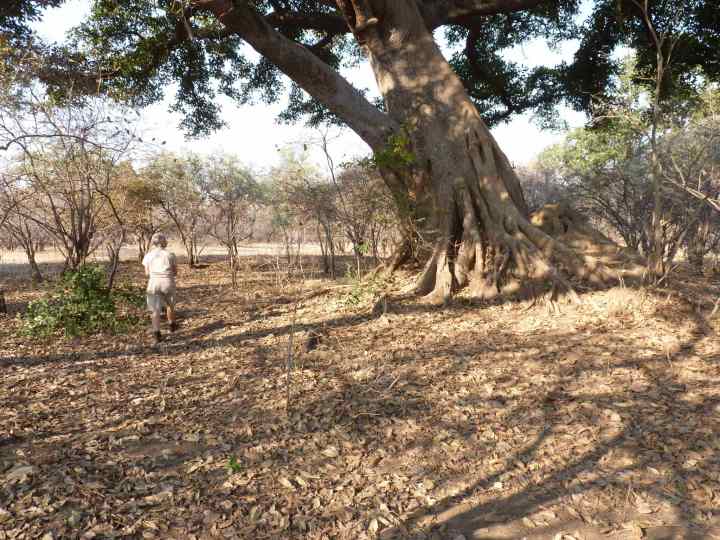 Watching a fig embrace. The host tree is still strong and visible on the left.

Luckily for some (in rare cases) animals may come to the rescue. The aerial roots are eaten by elephants and, in this way, these animals become an unwitting ally of the host tree, halting the growth of the fig and saving the host tree at least for a while. 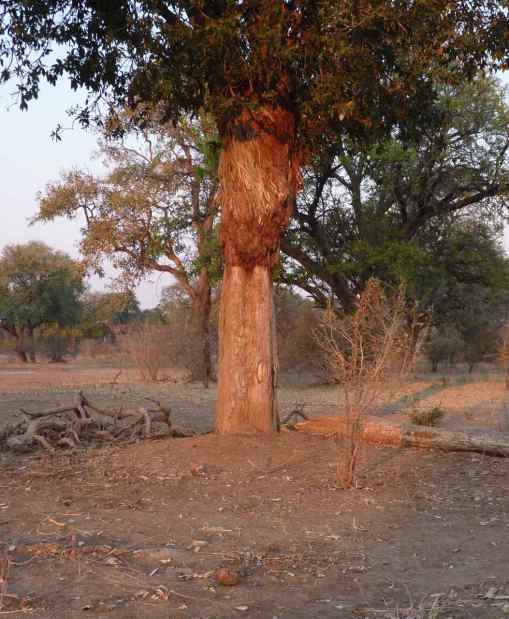 A closer view of the fig tree being browsed and stopped from engulfing the host tree.

However, this is an exception and the usual outcome is that the Zambezi fig tree becomes established, winning another battle.

The branch on the right, above my wife, is what remains of the host tree.

Fig trees are beautiful shady trees with a great canopy that extends further than most trees, considering the size of their main trunk. This is often their weakness as, being soft, they often crack and fall which leads to the death of the tree.

Despite these battles that rage silently in plain sight, we should not worry as the outcome is by no means the doom of the striking Mana Pools woodlands!