It was July 1979. I was getting ready to travel to Armidale in Australia to join a team of scientists working on internal parasites of sheep to study for a PhD. My medical clearance, visa application and travel bookings for September were all advanced. I had been in Uruguay for a few months after getting an MSc in animal parasitology at the University of North Wales, UK and the PhD opportunity was the logical next step in my mind. I was very excited and looking forward to the challenge.

That is why the message from the Food and Agriculture Organization of the United Nations (FAO) in Montevideo informing me of the arrival of an urgent Foodagram (FAO telegrams then) addressed to me was a jolt. It was not unexpected, as months back while ending my studies -and still in the UK- I had applied to an FAO Andre Mayer Fellowship to study ticks in Africa. However, it was inopportune!

I returned the call as soon as I could and they confirmed that they were trying to contact me urgently. As there were no faxes or e-mail attachments in those days, we agreed that they could send the -still unopened- telegramme to me by the local bus. I arrived the following day and I read it with some trepidation. It said:

After digesting the contents of the telegram and its potential implications, I contacted FAO in Montevideo again and we agreed that we would wait for the information that would come by pouch. It was easier said than done and I immediately started to think on the decision I needed to take as, although Australia was attractive, Africa -being totally exotic- possessed a strong allure.

Some days passed and, in view of the absence of news, I continued with the Australia arrangements, just in case.

A couple of weeks later, however, I got an envelope with the promised information and the written offer that awaited an urgent response. Through the enclosed documents I learnt that Professor Andre Mayer had been Chairman of the FAO Executive Committee in the early days of the organization and left a donation to FAO for young scientists to conduct research projects in relevant development issues. I also learnt that I was going to be based at Rusinga island and joining a team of tick and tick-borne disease experts in Kenya. Images of an Indian Ocean island with palm trees came to mind!

My interest in animals led to me becoming a veterinarian and what little information about the African continent that was available did nothing to discourage my interest. During my childhood my mother -a devout catholic- subscribed to “El Africanito”, a monthly publication from the work of the Catholic Church in Africa. I used to read this every month. Later on, the series “Daktari” with Clarence the cross-eyed lion and the movie “Hatari” with John Wayne were fascinating to me.

Later in life and while already working as a veterinarian, I read a publication on African cattle in the Hoechst Veterinary Blue Book which highlighted the enormous numbers of cattle per veterinarian in Africa as compared with Latin America and other continents. More recently, my appetite had been further wetted by hearing my lecturers in the UK talk of tsetse flies and ticks and related travel tales.

This was my opportunity! However, I was committed to Australia. After a lot of thought and not much sleep I took the bus to Montevideo to find out more from FAO Representative in person. By the time I left his office I had made up my mind and chosen Kenya and, although unaware of it then, our lives would change in a way we could not imagine.

Luckily, the Australians were very pragmatic and they gracefully allowed me to unravel my Australian attachment so that I could accept FAO´s offer. The greatest opposition to the decision came -probably justifiably- from family and friends as it was going against “the norm”. I still remember the reply from an old friend when I told him that I was going to Kenya. “Julio, you are crazy” and then added “You will leave your carcass in Africa!” What reply could I give to what seemed like common sense?

The identity of Rusinga island remained a mystery. The available atlas we checked failed to locate it and it was finally a geography professor who informed me of its location in Lake Victoria, a rather large body of water I had not taken into account until then.

I sent my acceptance and it was agreed that I would travel alone as I needed to pass through Rome for briefing on my way to Nairobi to join the work team. The plan was for my wife to join me later in Nairobi when I already had a clear idea of ​​what it all meant and had gotten my bearings!

I do not remember my departure from Uruguay to Rome, perhaps I was too worried and nervous, or may be my memory fails me now! I do not remember what airline I traveled with or how the trip was. I do recall arriving in Rome and getting to the Lancelot hotel where, by virtue of sharing the dinner table, met other FAO and World Food Programme colleagues that spoke about the wonders of Kenya. 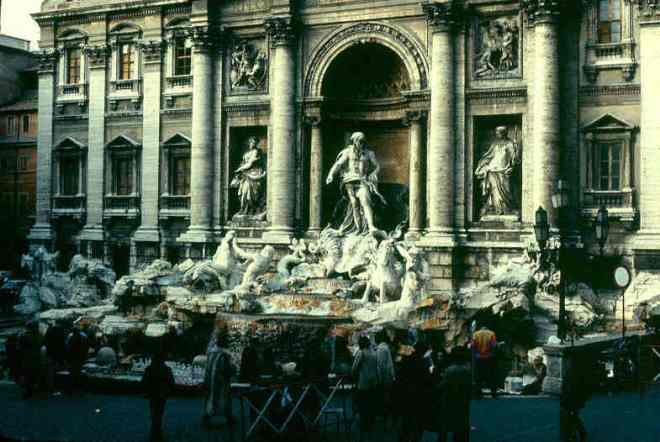 The Trevi Fountain in the 80s. I did throw a coin then and returned!

I also remember being stunned by Rome’s beauty and being paralyzed in fear of its traffic. The walk to FAO from the Lancelot was memorable as there are a number of monuments nearby such as the Coliseum, the Arch of Titus but also some potentially lethal traffic traps in at least three places. The experience of witnessing a visitor trying to cross the street remains vivid in my mind. Stopping at a red light I noticed a tourist by my side talking to his wife in German. He was obviously agitated seeing that the Italian pedestrians continued to cross the street despite the red light. He waited patiently for the light to change to green and then he stepped onto the pavement. The moment he did so, a car running a red light zoomed past him at very close quarters and he lunged backwards, totally dumbfounded. He was still there, totally lost when I moved on. Welcome to Rome, I thought!

Once inside FAO I had a triumphant feeling and I thought “I am in the world’s cathedral of agricultural knowledge and it is offering me something, well done!” At that time, young and ambitious, I thought I touched the sky with my hands and I even took my picture behind a desk to show my “importance” to family and friends. The people I met and their quality, both human and technical, immediately brought me back to my humble situation of a young person at the very beginning of his career and I focused on my work as it was obvious that I had lots to learn!

At FAO, thinking that I had made it… I was to return to work to this office in the 90s! The telephone had changed by then!

My FAO colleagues prepared me technically but they also gave me lots of well-meaning advice: do not try to do too much, at ICIPE you will have a good boss, everything on ticks and tick-borne diseases is happening in Nairobi now, it is an expensive place but there is an airport bus to town and cheap hotels, be careful with malaria on the coast. These are some of the ones I still remember. After one week, I was ready to travel. 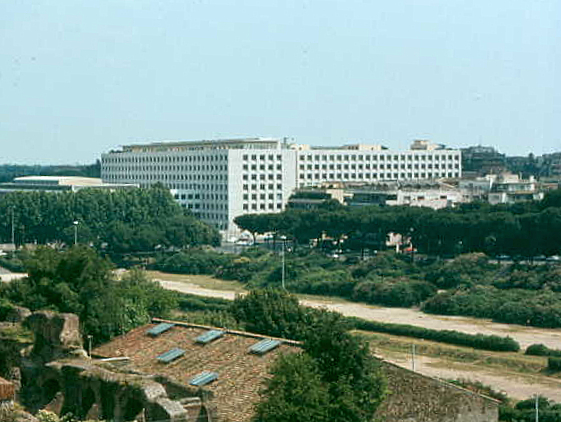 FAO Headquarters from the Palatine Hill.

A short story from Ethiopia. Bushsnob