There are 430 km from Harare to Bulawayo and 330 km from the there to Hwange National Park. As we had time, we preferred to interrupt our journey at Bulawayo to ensure that we drove safely and experiences less fatigue.

The first part of the journey was uneventful except for several Police roadblocks, speed traps and Toll stations, in addition to the road works that require rather long stoppages as the road is cut in several places. This being said, it is good to see that roads are being maintained.

It was during one of these stops that our attention was drawn to a pick up queuing ahead of us. We could see “things” moving in the open back. At first we took it for some flapping canvas or plastic sheeting, a common occurrence. On second look we realized that there were heads bobbing up and down. The heads’ belonged to a “flock” of red hens being transported to or from a farm!

The pick up’s feathery occupants were clearly bored and bent on having a look around! Look they did and, seeing freedom, they became more agitated and, somehow they managed to loosen the strings that were keeping them tied to the car and once free, it took a very short time before a pioneer gathered its courage and jumped out! The occupants of the pick up were both on their cell phones and did not notice this. It was only when several hens had abandoned the car that the lady occupant -a rather large lady- managed to get out of the car and take in what was happening. There were hens running for freedom in several directions on both sides of the road.

The large lady, clearly not dressed for running after chickens in high heels, a tight dress and large earrings, made a short attempt at getting some back and nearly got run over -together with the hens- by a car coming in the opposite direction! Not keen to begin with, this quickly persuaded her that it was too much work so she quickly gave up the chase, huffing and puffing and proceeded to contemplate the calamity. While this was going on, the driver finished his call and got out of the car to assess the situation. Realizing that it was critical, he recruited some of the road workers who gradually, managed to recover the fugitives that miraculously did not get hit by the passing cars!

When the light turned green we overtook the troubled pick up. Operation “catch that hen” was still going on and the fugitive hens were being captured, tied and deposited unceremoniously back in the car.

After the night in Bulawayo we resumed our journey. Again the road was not too busy but we came across a number of rural buses, a remarkable feature on Zimbabwe roads. 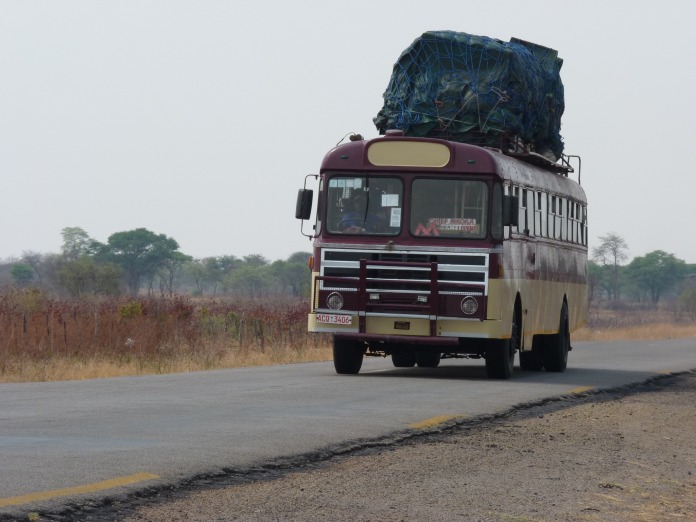 They are all similarly built, following a format that has not changed over many years. Their main signature is their large roof racks, usually heavily and highly loaded with the belongings of people going to the rural areas. They are a very effective means of transportation loyal to the motto “if it works, don’t fix it”. Their drivers deliver a rural courier service as they carry money and other documents of importance that need to change hands between rural families and relatives working in the cities and viceversa.

These buses are not fast and their drivers are rather careful so they did not cause any problems, and we were able to admire them as we overtook or crossed them while wandering about their final destination. 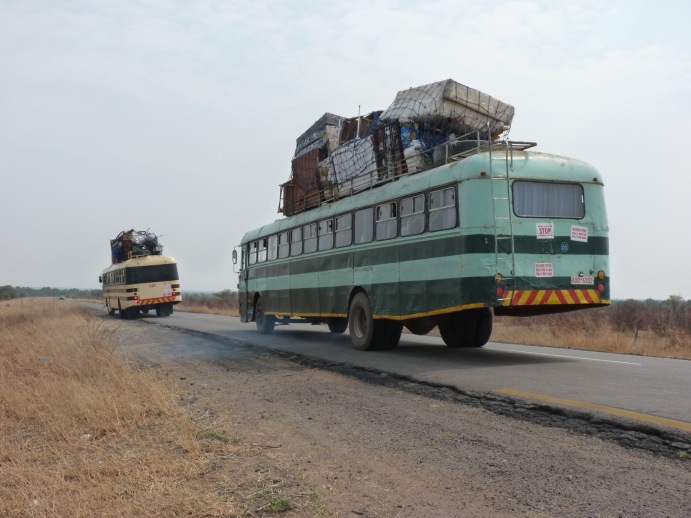 A different -and rather dangerous- find was a convoy of lorries carrying very heavy mining equipment that occupied the entire width of the road, making overtaking a real hazard. 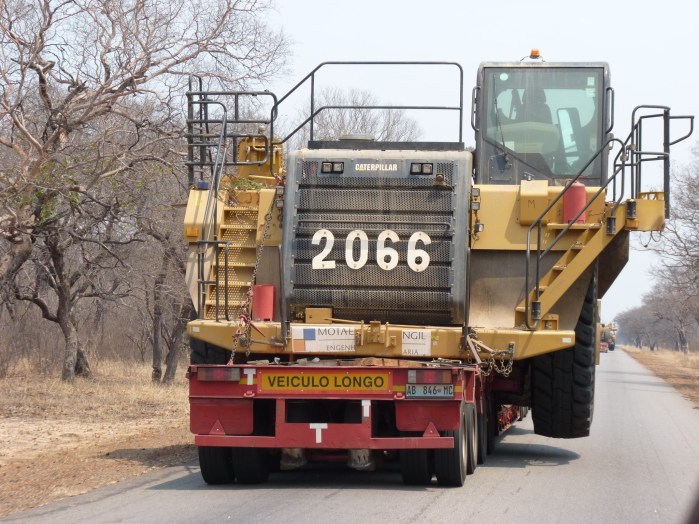 We followed the wise course and waited for a break that took a while to come as we crawled behind the convoy. The opportunity presented itself at a toll station as the machines, because of their bulk, needed to take a detour around the station. We drove through and left them behind to continue to our destination at good speed.

I resume my blog writing after quite a while to describe a recent trip to Hwange National Park.