End of October is the height of the dry season in Mana Pools. The place really looks like a brown dust bowl the exception being those trees that, anticipating the arrival of the new rains, flower now to be ready to drop their seeds with the onset of the rains presenting the landscape with some colourful blotches.

Very few Apple Ring Acacia still had pods and the experienced elephants that knew the reward of a few strong shakes applied to the trunk, were using this technique and relishing the fruit of the “podfall” they produced!

The scarcity of the Acacia pods is now compensated by the abundance of sausages of the Sausage Trees, now quite grown although probably not so palatable. As a consequence of the general absence of food on the plains, the animals in general and the elephants in particular were seen mainly on the margins of the Zambezi River, feeding on aquatic plants. The Zambezi banks were dotted with elephants and many were feeding and bathing below the banks of the campsite.

Despite this, although harder to find, some elephants were still inland. We met one of them, a rather large animal with good ivory for Mana Pools. It happened to be using the same road as us and coming in the opposite direction! As we all know, elephants have the right of way! It was a rather large and beautiful bull with good tuskers for Mana Pools.

It had a relaxed but sure gait, I imagine that this is the attitude of someone with no threats. He clearly saw us before we did and did not define us as a worthwhile threat so it continued walking as if we did not exist.

We parked politely in the bush by the side of the narrow road, stopped the engine and watched this magnificent animal. It passed very close to us and in so doing we could appreciate its size as well as take some photographs of it.

While on our side we observed, with some preoccupation, that it had a rather large area of its skin at the back and flanks covered with skin blotches that look like some kind of fungal infection. Elephant skin is thick and tough, reaching almost 3 cm on it s back. Additionally, the elephant uses mud and dust to further protect its skin, as it is a very sensitive organ. 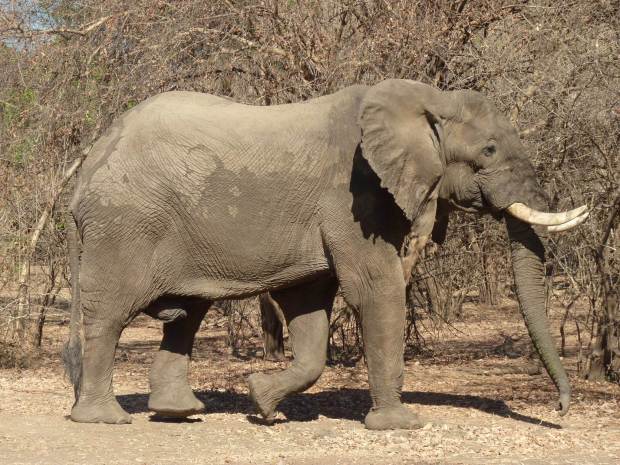 The suspected skin problem is seen as paler areas on its ears, back, sides and upper hind leg.

Although we had observed this condition before, this is the most extended that we had seen so far. Hopefully the mud baths will help this animal to control it.