A view of the Andes with a Vicuña in attendance.

In 2001 I got transferred from Harare to La Paz in Bolivia, a rather dramatic move but the organization needed my experience and fluency in Spanish. At the time, the departure meant -sadly then- a high possibility of not returning to Africa, something that was not in our plans. It was a difficult move, made slightly more bearable at the time by the obvious bonus of our children learning Spanish. As it turned out, our time there was far better than what we expected.

Sowing in an Andean valley near Potosí, Bolivia.

While in Bolivia[1] we spent our holidays travelling around the country when we could but we also took the opportunity to visit parts of Brazil, Chile, Peru and Argentina. Most of this travel was done by road. Apart from Chile -closer from La Paz- Argentina was the most visited, particularly the Parana River where we mainly fished for Dorado (Salminus maxillosus) and Surubi Manchado (Pseudoplatystoma coruscans[2]), two great game fish. While we would stay in the Corrientes city surrounds, we also visited other well-known fishing spots such as Paso de la Patria, Ita Ibate and Itatí. I will cover this experience in another post. 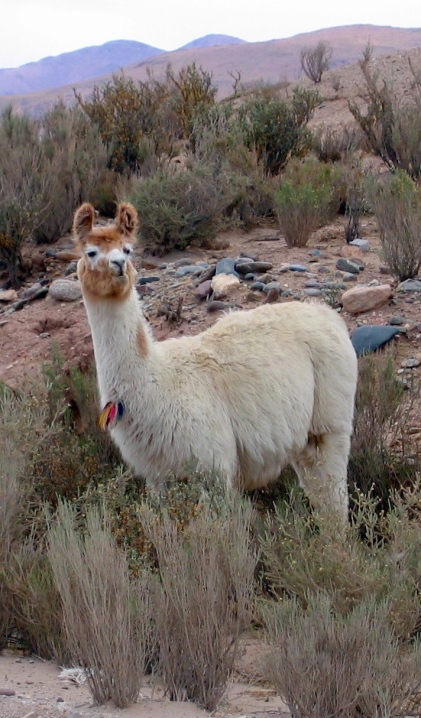 A Llama looks on.

The trip from La Paz to Corrientes took us through several interesting places. The first stop was the city of Oruro, well-known years back as the stronghold of Simón Iturri Patiño, who aside from Evo Morales today, was perhaps the most famous Bolivian. For years, Patiño dominated the world tin production and became known as the “Tin King”. Part of his large fortune is now in the Patiño Foundation that is very active in Bolivia with development work. Oruro is also regionally and internationally known for its indigenous Carnival celebrations[3], not to be confused with the more famous Brazilian one.

A member of the “Diablada” (Devils) dancers.

Another group of dancers known as “Morenos”. 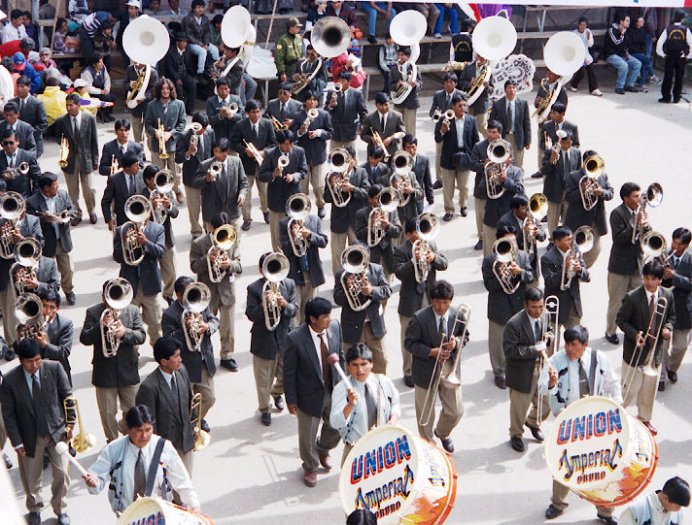 One of the many bands that accompany the various groups.

About 400 km further on we found Potosí. The first time we drove there the road was very rough and, to make matters even worse, the asphalt was being laid down. Potosí is where most of the silver of the Spanish conquistadores was mined and where their gold and silver coins were minted. The “Cerro Rico” (Rich Hill) is still producing silver, although considerably less than in the times of the conquest, now led by individuals. The hill is reputed to have shrunk over time due to the intensive mining that took place. Sadly, it has -and is still- swallowing many lives and it is a true “mass grave”. Mining is normally a tough activity anywhere. If to this we add that the activity is performed at an altitude of 4,000 m, with minimal or no security measures and rather rudimentary tools, we begin to get the picture and the thought takes your breath away, if you still have any to spare when entering a mine![4]

Potosí from the road to Tupiza and Argentina.

Spending the night at Potosí’s altitude is in itself a challenge, with subzero temperatures at very high altitude and a rather weak sun. As if this wasn’t enough, hotels tend to keep their central heating at full throttle and the warm and stuffy air hits you the moment you walk in.

Interestingly, our family was divided regarding “altitude tolerance”. While my wife and son were almost indifferent, my daughter and I felt like fish out of water! This meant that we had two rooms: the tough guys and the sissies… I cannot account for the fate of the tough guys in the room next door but as far as my daughter and I were concerned, we did suffer the lack of air. You are probably thinking, the obvious thing would be to open the windows to let fresh air in, and I completely agree! This was attempted and soon we had frost on the beds, so rudimentary survival required that we close them and look at each other in resignation while the green tinge of our skin increased! Eventually the night would be over.

On occasions, in search of oxygen, we deviated to Sucre for the night. This is the administrative capital of Bolivia, a beautiful colonial city of white buildings with tile roofs, hosting a number of museums and churches worth a visit. In addition, some of the best hats are made in Sucre. Although that meant an extra 200 km, it was worth the drive as the sissies felt much more comfortable here.

A church at dusk in Sucre.

Beyond Potosi and Sucre we travelled via Tupiza, to Villazón where we would cross to La Quiaca in Argentina. On the way we passed close to places where Ernesto “Che” Guevara started his ill-fated attempt at a revolution and eventually terminal revolutionary attempt in Bolivia. We also visited the area where Butch Cassidy and the Sundance Kid met their nemesis at the hands of the Bolivian Army that seemed to have been rather active during those days.

The trip through Bolivia was rather epic as the roads were rough and dusty and most of the trip was at high altitude and very tiring. I recall four punctures on one of these journeys and an almost complete absence of road signs that meant getting lost on the dusty roads! Matters were not improved by our 10 year old son’s “Is there still a lot to go?” question after 10 minutes of our departure from La Paz, rephrased slightly and repeated as time went on… I vividly recall one arrival at the Villazón border post while Mass was being celebrated at the border crossing point and all traffic in both directions needed to wait for about an hour until all believers were satisfied and we were allowed to proceed! 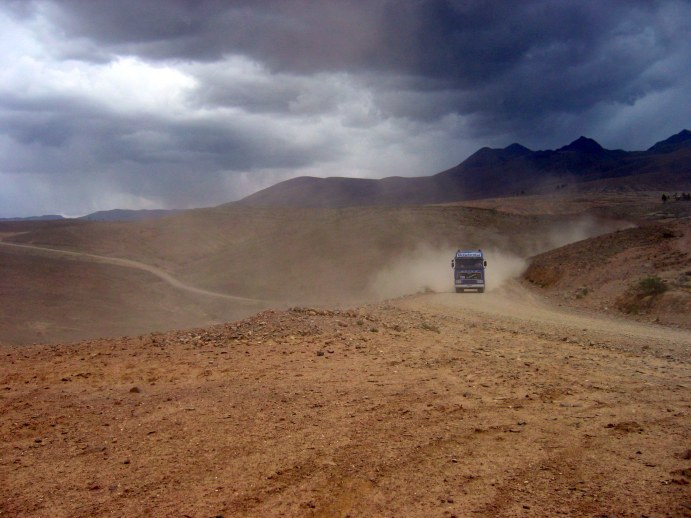 Dust was not in short supply on the way to Tupiza, Bolivia. 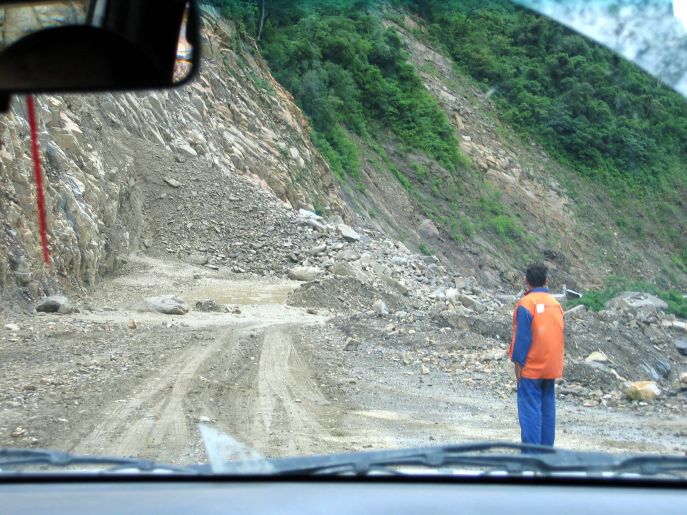 The road we just covered…

Leaving the border town of La Quiaca and entering Argentina was a big and welcome change. The roads were perfect and, on the first bend in the road there were more road signs than we had seen so far in Bolivia! The added bonus of petrol stations with shops was irresistible for our children. I am grateful for the child locks that prevented them from jumping out in order to enjoy their favourite drinks and snacks!

Continuing our journey after La Quiaca we would enter Jujuy Province, pass by its homonymous capital city and finally get to Salta, the capital of the Province of the same name. This was the first place where the blood oxygen levels of the sissies were finally restored and a really good night’s sleep could be had without dreams of frenziedly swimming through water towards the surface only to drown in the process, waking up with a serious tachycardia and covered in cold sweat (consequence of the anoxia!)

At this stage 800km of driving still remained to reach Corrientes. This took us through the Chaco region on an almost totally straight road across places with exotic and even threatening names such as, Pampa del Infierno, Canal de Dios, Monte Quemado, Quitilipi and Pampa de los Guanacos. On one of the journeys I needed to make a pit stop as something I had eaten did not sit well with me. When I came back to the car I made a joke to the kids of having knocked out a lot of guanacos as a consequence of my act! This has endured all these years and is still the topic of conversation and laughter in the family!

Eventually we would arrive to Resistencia, the capital of the Chaco Province and after the final 20 km, that included crossing the mighty Paraná River, arrive to the city of Corrientes, Capital of the Corrientes Province, and our fishing destination. Fishing in the Paraná was excellent and will be addressed in future posts. Unfortunately Corrientes can be extremely hot so we never considered it as a place we would be happy to live in.

During the first journey, we spent one night in Salta before continuing our journey. During the next trip we luckily found a very nice hotel, the Selva Montana in a suburb of Salta called San Lorenzo, the summer destination of the patrician families from Salta. Gradually Salta moved from a one-night stop into a destination where we could enjoy several activities, together with great food and wine! As it happens, the place grew on us to the point of making it a “home” as we were not sure would be able to return to Africa.

Our farm as seen from the opposite hill.

As the weather was very pleasant and the place very beautiful[5] the thought of settling there grew and we decided to explore the area with the aim of acquiring a plot of land where we could eventually build a house. We looked at several options until finally we settled for what we have today: a small farm at a place called “El Gallinato” located about 20km north of the capital city of Salta. The farm is located in a region known as “the Yungas” which is in fact a transition area towards the Andes Mountains, at an altitude of about 1200m and an important area for the biodiversity of the region.

Its cloud forest is host to some remarkable tree species, some of which have been sadly cut as they have fine wood. However, there are still beautiful trees and some regrowth is taking place. Indigenous Walnut trees (Juglans australis), Tipas (Tipuana tipu) and Ceibo (Erythrina crista-galli) are among the species found in the area. There are almost two hundred bird species including special ones such as Hummingbirds, Toucans, Guans, Jays and Seriemas to name but a few. Condors are sometimes seen flying overhead.

There are also several interesting mammals including Wild cats, Foxes, Ocelots, etc. However, the climax in terms of mammal sightings for us was the lucky spotting of a Puma (Felix concolor) or Mountain Lion that crossed the road in front of our car and stopped to watch the occupants! Finally, insect life is prolific and butterflies and moths are simply amazing!

Through this short account you are now aware of some of the motives that convinced us to secure this rather out-of-the-way piece of land in the foothills of the Andes that will be the subject of future posts.

[1] We spent five good years there that will be dealt with in separate posts.

[3] I had the privilege of being invited to watch it while working there and it is a totally unique event.

[4] A well known tourist attraction is a visit to a mine.

[5] It is known as “Salta la Linda”, Salta the Beautiful.