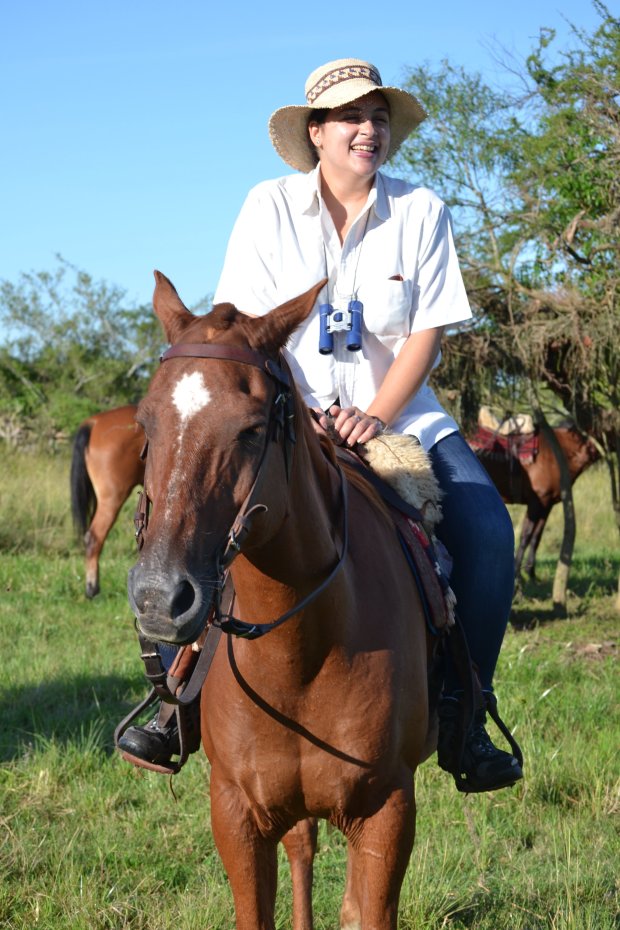 One of the activities offered at Rincon del Socorro, during our visit to the Iberá Wetlands, was horse riding. Unlike all other members of the team that eagerly awaited the day, I dismissed it without thinking and made an alternative plan with our guide Mingo. I do not like horses or rather I am scared of them! The worse part is that they detect my fear from a mile away!

I have no doubts that it all started when, as a baby, a cousin placed me on a horse. I have a pictorial record of the event and my face while enduring the experience is telling! I am sure that although I cannot remember the event, it left a mark that I am not able to overcome without expensive intense psychiatric therapy! As avoiding horses is an easier solution, this is the path I have chosen after -as an adult- I became aware of this “trauma”.

Dodging horses during my four-year stint as a practitioner in Uruguay, a country where these beasts are revered and left to die of natural causes to reward their loyalty was, to put it mildly, difficult! So I tried to overcome my dreads and did what I could. Most of this involved referring the cases over to other colleagues!

To actually sit on a horse is an even more terrifying experience for me as I become rigid with fear and tend to fall off the horse at the first unexpected movement. I studied veterinary medicine with Álvaro, the second of nine brothers who owned a cattle ranch in the centre of Uruguay. They were a horse-loving family and each brother had a few riding horses as a lot of the tasks were carried out on horseback. The few times I visited the ranch it involved joining the routine cattle work. While I like working with cattle on foot, I had difficulties joining the necessary horse-dependent preliminary preparations inherent to cattle work.

My first time on a horse started early in the morning with the saddling of the beasts. As all were aware of my limitations I was given the tamest horse. In retrospect, as the mare’s name was Tarántula (the local name for a hairy spider!) I should have politely refused the offer but I did not! I received “riding instructions” from all and I was declared “ready to go”! I mounted and sat on the horse and followed the others, or rather Tarántula followed the others. It all went well while we walked towards the field where the rather lively Aberdeen Angus cows and calves were. The task was to separate them, as we needed to vaccinate the calves.

We entered the field and, before I knew what to do, Tarántula started moving faster and trotting in anticipation. I discovered too late that the mare was tame but not stupid… She had clearly identified a “separable” cow-calf pair and went straight towards it to perform the task. I followed (I had no option!) and managed to stay on during the trotting-galloping-trotting that took place and began to feel proud of myself as we were succeeding. My elation came too early! The moment Tarántula got between the pair and the mother lost contact with the calf it veered back to join its offspring. Tarántula reacted swiftly by swerving to the left to avoid their reunion in a great move for her equine brain. Although my more advanced brain understood a millisecond earlier what the horse was attempting, time was not enough to adjust my body to hers! What happened next lasted at most a couple of seconds: I went over the side head-first and hit the ground, luckily absorbing some of the knock with my arms. In the process I destroyed my watch and got badly knocked. To make matters worse my foot went through the stirrup and I became trapped. Flashes of western movies seen in earlier life of cowboys being dragged all over fields and disintegrating in the process assaulted me. Luckily, the mare did not watch the same movies and, confused and I am sure amused, she stopped in her tracks and looked at me in surprise, not understanding what had happened to the rather rigid human she had been carrying!

My working companions’ help with my condition was severely delayed by hilarity and rude remarks. Eventually I was released and, enduring all imaginable jokes, I abandoned the exercise to lick my wounds while, after tying the horse on a tree, I decided to watch and admire my friends’ riding skills!

Although funny in retrospect, this experience has remained in my mind all my life and it was the reason for making alternative plans for the Iberá horse-riding proposition! However, human folly has no limits and, when time arrived and after thinking about it, for the sake of teamwork (and under silent and subtle peer pressure…) I decided to join the equine adventurers not without obtaining assurances beforehand from the organizer that the mounts were tame almost to a stupid level.

I hasten to inform you that I did not fall and I feel so proud about it that I fail to find the right words to describe this feeling. In fact, with the exception of a couple of hitches, I enjoyed the trial.

A rigid Bushsnob being optimistic about the challenge. Picture by Mariana Terra.

The first challenge came when we needed to cross a rather deep river that implied a brisk descent, water fording and a steep climb up the other side! I got my feet and legs water-logged as all my attention and extremities were holding on to avoid a worse fate. After that success I felt physically soggy but spiritually high. This glorious feeling lasted for a few minutes until the horse skidded on the muddy ground and my heart missed a beat. Luckily the four legs quickly recovered their verticality and I continued my triumphant parade all the way through the obstacle course and back to the ranch. 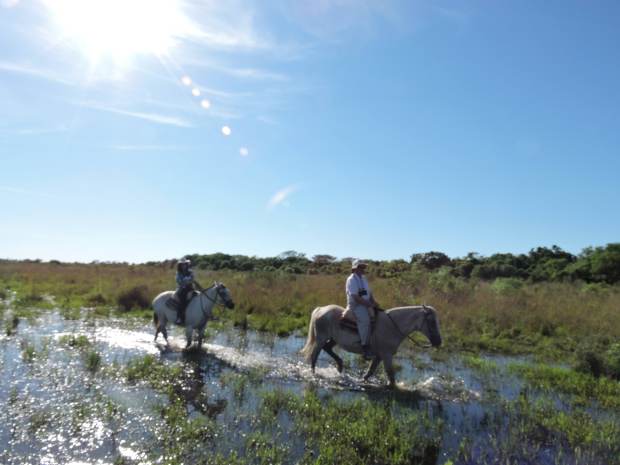 The Bushsnob being looked after by a member of the team.

The ride took us through areas of tall grass, difficult to walk through, that opened up in a large flooded area where lots of water birds were present. An interesting sight was a lone Marsh Deer (Blastocerus dichotomus), the largest deer species from South America.

The good news is that I quite enjoyed the ride as it was far more comfortable than anticipated and the fact that I managed to stay on the horse made it 100% better than earlier experiences! The bad news is that, after this success, I may try again!

Back to the Ethiopia stories.