After our trip to the Iberá wetlands reported earlier in this blog, my mind remained on the fishing, as I almost could not remember when the last time I caught a fish worth lying about was!

A very simple armchair exploration showed me that the above-mentioned wetlands drained into the Paraná River, via the Corriente River. Further investigation revealed that in this area there is a town called Esquina in the Corrientes Province where people go fishing! I had heard about this place before but never gave it sufficient attention as it is closer to Buenos Aires than other fishing spots in the region and my belief is that large cities and fishing do not go together.

So, taking advantage of the need to travel from the Andes foothills to Carmelo, our town in Uruguay, I decided to explore the Esquina area with a view to go fishing there in the future.

Esquina, founded with the name of Santa Rita de la Esquina del río Corriente started its life in 1785 when fifteen families of which six were of Italian origin settled in the area. It is located on the left (eastern) margin of the Paraná River, about 670km North from Buenos Aires. Predominantly a cattle-rearing area it is also known for its watermelon production!

The city still maintains the air of a colonial town where its low houses -of Italian influence- are shaded by large trees. Esquina’s main attraction resides in its riverine location where it enjoys the calm waters of the Corriente River delta that connects to the Paraná -located further West- through a man-made channel.

Enough history and back to our trip!

The town can accommodate up to two thousand visitors. This large bed availability for a city of 26,000 people is explained by its hosting of street carnivals in January and February and the Fiesta Nacional del Pacú (National Pacú Festival), a fishing competition that attracts around 25,000 visitors, in May of each year. So, in view of this situation we did not book in advance and left the choice of accommodation to an in situ choice.

It did not take too much time to find a place to stay, the very nice “Casa del Puerto” that offers reasonable B&B and its lawns end at the river. Seeing the beauty of the riverfront, exploration turned into action and it was not long before a fishing trip was booked for the following day while we spent the rest of the afternoon walking about town and resting, after the rather long journey.

Fishing started at 07:00 hours when our guide José came to meet us at the hostel’s small jetty. All was taken care of and we agreed to fish in two stages, morning and afternoon with time in between to avoid the heat of lunchtime and have a siesta to recharge our batteries. We left with high hopes, as the setting was clearly fishing-friendly!

A channel in the delta of the Corriente River.

Despite the predictions by the hostel owner and our guide, fishing did not live up to our expectations and none of the “Big Three” Dorado, Surubí and Pacú were caught. To save you reading time, we did fish three “Palometas” (also called “Piranhas”) of the Serrasalmus genus (probably S. aureus) and one “Patí” (Luciopimelodus pati). 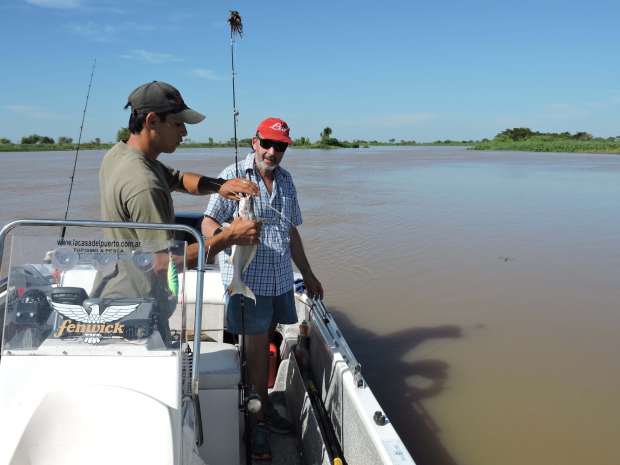 The bushsnob with a pati. 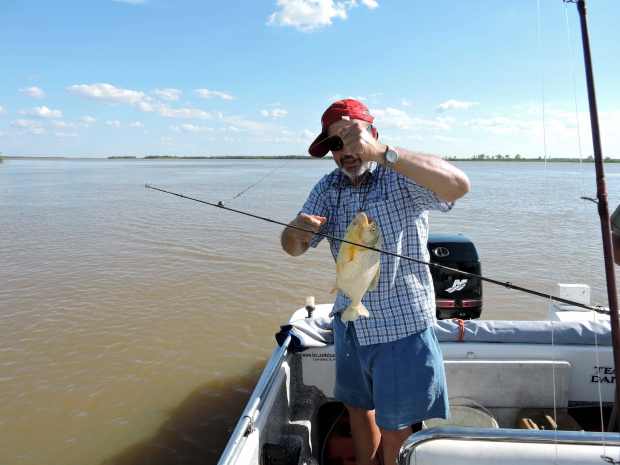 The bushsnob with a “palometa”.

The affair was rather disappointing and we remained with the doubt of whether it was a strike of bad luck or the area has too many fishing enthusiasts! Although we fear the latter, we will come back to find out and report accordingly.

Despite the poor fishing, boating through the various channels of the Corriente River delta was a beautiful experience. We saw many water birds and even managed to spot one capybara, a sign that they are either very shy or few as hunting goes on in the area.

And then, while cruising through the channels, we saw it! A large head bobbing in a channel ahead of us that, for a few seconds, brought us back to an African river! We were aware that hippos in South America are still confined to Colombian rivers and it was not a semi-submerged capybara or tapir head either! It was a humble cow swimming to move from island to island in search of greener -or different- pastures. Clearly, to be a successful cow in the area you need to be a good swimmer! 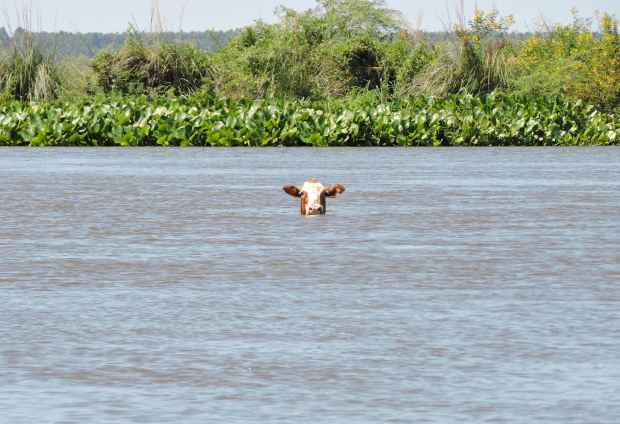 The cow in shallow water.

We watched and followed the “water cow” for a while and learnt from José that, although the animals are used to water, when floods come cattle still need to be evacuated to dry land to save them from drowning. Further, I could also appreciate the difficulties of rearing cattle in such an amphibian environment and pondered the difficulties of mustering the cattle and the need for good (water) horses as well! 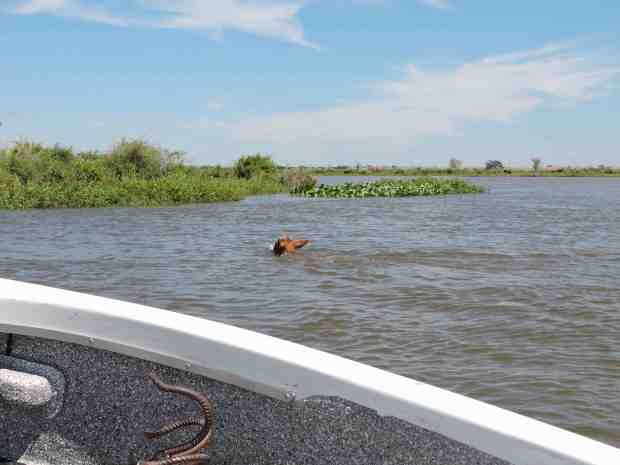