Finding a tarantula road kill was interesting. A car had squashed the poor thing and carnivorous wasps were feeding on its juices. We commented about the similarities of this “micro” kill with a carcass being cleaned by vultures in Africa but we were in Salta, Argentina.

The find reminded us that these arachnids existed, as we had not seen them for a few years. Two days later our farmhand Juliano -aware of our interest in wild things- appeared at about 22.00hs carrying an empty bottle of a soda drink cut in half and said “Sir, I think that this may interest you”. Inside the bottle was a large, dark and hairy tarantula! I thanked him profusely for bringing it and kept it in a terrarium hatching photographic ideas for the following day.

Very early the following day I could not wait anymore and went to have a closer look. I am fairly relaxed when it comes to getting close to any animal except hairy spiders! It is not the blind terror some people feel about these creatures but a kind of dislike and perhaps mistrust, probably aided by my ignorance towards them[1] . However, after seeing this one in daylight I found it truly beautiful and, at the same time, rather large, compared with others I had seen earlier. It was very hairy as well! Its sex remains a mystery as I am not good at spider sexing techniques… 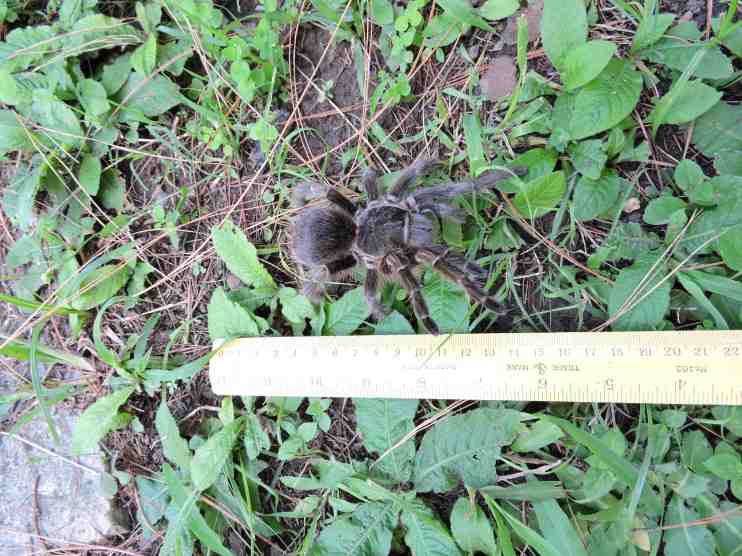 Seeing what I was facing I put on heavy leather gloves and took it out to the grass to watch its behaviour, just in case. It seemed very relaxed so I felt comfortable enough to handle it gently and take some pictures (some of the ones shown here) and a couple of videos that I will upload later. After this, in order to get clearer shots I placed it on our concrete table in the garden where I managed to have a rather close “tête a tête” with it.

The ruler is in centimetres.

Pictures from the side should be the safest!

While I was doing this, Juliano came to have a look and warned me about these spiders. Apparently someone he knew in Beni, Bolivia, had one jumping and biting his nose, which resulted in him walking around with an enlarged and inflamed nose for a few days! This was not what I wanted to hear in that situation but I thanked him for his advice. However, I could not help laughing loud at the thought of the spider jumping at my nose and my possible response of running about trying to dislodge it in a full-fledged spider-induced terror fit! 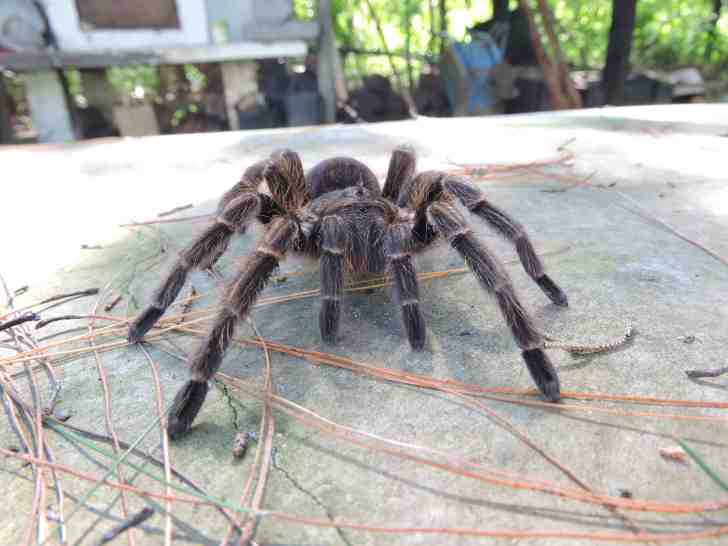 Was it considering jumping at me?

Nothing like that took place and I took all the pictures and videos I wished with the creature showing a remarkable indifference towards my presence, even when handled! After I completed my picture session I found it a good place and released it in the back garden where I hope it will live its long life.[2]

A couple of days later I mentioned this encounter to my daughter (the Ed.) and she was duly impressed, particularly when she saw the pictures. She shares my negative feeling about hairy spiders and showed some concern for my welfare, thinking that I had kept it as a pet! Her apprehension related to the risk of it “shooting” urticanting bristles from its hairy abdomen at me! This they do by strongly rubbing their back legs and literally shooting their hairs at their perceived enemies! 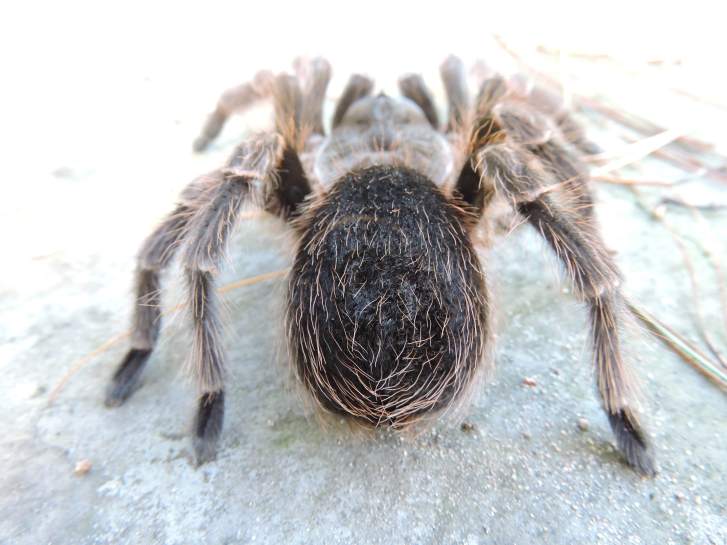 A real close “close up” of her bottom before I learnt of the throwing bristles ability. Look at the picture well because I will not repeat it!

Although I took close-up pictures of its backside, I was pleased to announce to her that the spider did not shoot at me, despite my having been very close to is very hairy derriere!

Considering its possible long lifespan I hope I will find it again in the future.

[1] I believe it belonged to the Grammostola genus. This genus is very dynamic as new species are still being discovered.

[2] I learnt later that females live for over twenty years while males live a shorter life.