When our good friend Carlo invited us to go looking for truffles[1] near Rome we accepted gladly. We knew that he had started this activity a few years back and we had followed his progress. We also had tasted these sought after delicacies earlier and we were looking forward to a possible repeat of some of his specialties such as Uova di quaglia al tartufi (quail eggs with truffles) or pasta with truffles. He had also assured us that barbequed meat and truffles was great so we (meat-eaters, sorry) could not wait to go out! We were also assured of good company and some exercise anyway!

Carlo loves dogs probably more than cooking! Apart from having had a wolf-dog cross for several years he breeds Maremmano-Abruzzese[2] and is among the top breeders in Italy. Suffice to say that they are large and that there are never less than ten of them at the house. Luckily their garden is rather large as they are massive!

Although the Maremmano are his favourite, they are not good in finding trufflles so he keeps an additional four “truffle dogs”and one young apprentice. All females, they are two Cocker Spaniels and three Poodles (including the puppy). Carlo had painstakingly trained them all for months and a couple had a few years of experience. We took the five of them and I am glad that he knows how to handle them as he managed three while my wife and I had one each, admittedly with some difficulty.

Once we arrived at the right location they were released and we walked until we found the first suitable place, an oak woodland where Carlo thought truffles should be. He then started to use special vocalizations to entice the dogs to search for their targets. The dogs went “bananas” and started sniffing the ground all over the place. Within a couple of minutes Miele (Honey), a Poodle, started digging frantically. 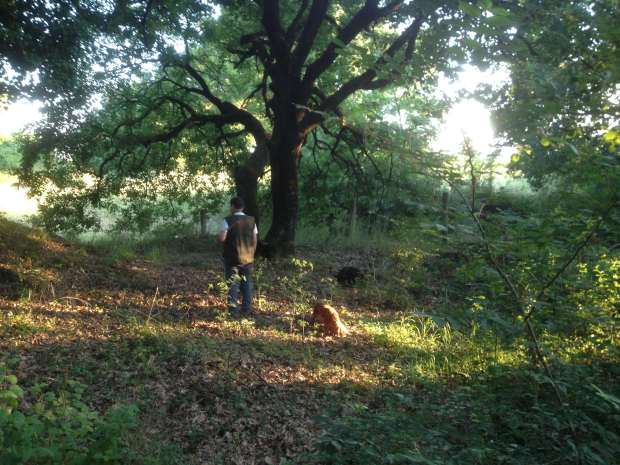 We carried the necessary and legal[3] digging equipment (a kind of small spade known as vanghella) and, seeing the dog’s high level of activity I prepared to literally go to great depths to get the truffles! My efforts were not needed as the dog, almost immediately, brought out a dark brown tuber the size of a golf ball that Carlo took from her mouth giving her a piece of sausage as a reward for her efforts.

Following my wife, Carlo and the dogs. 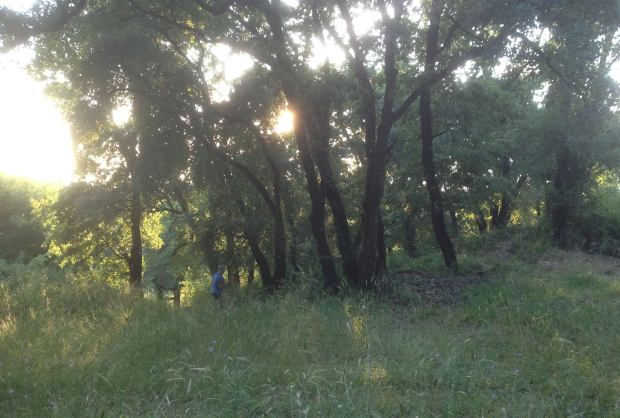 A possible “truffling” area is inspected.

Our walk following the dogs continued and the operation repeated several times until it was decided that we had collected enough and, as it was getting too hot for the dogs’ efforts, it was time to go home.

I believe that the truffles collected belong to the Tuber aestivum species. Common sizes go from 2 to 10 cm but larger ones are also found. These truffles have a rough brown or black outer skin known as “peridium”.

Our collection for the day!

When back home, at my request, the brown treasure was weighed. It reached a rather staggering 750g. Considering that a kilogramme of summer truffles sell for Euro 300, it was a good result for a couple of hours effort!

We are now sure that we have enough raw material to enjoy a few of Carlo’s specialties and, as we are still in Italy and have the suitable equipment (read truffle dogs!) we can always join Carlo on another of his quests for more!

[1] See: http://www.cercotartufo.it/j/i-vari-tipi-di-tartufo.html. It is in Italian but it has good pictures!

[3] According to the Law, “for the collection of truffles in Lazio spade or vanghella can be used exclusively, with the aid, for the excavation between the stones, small hoes”.