I begin with an important reflection: Milan is not Rome! I am aware that you may find this statement as a confirmation of my insanity. However, I said this from the point of view of a walking tourist. While Caput Mundi offers a secret at every step, Milan is mainly shopping and fashion, not really my thing.

As a result of a previous walk through Milan[1], my wife and I followed the advice of our host (our daughter the Editor) and proceeded to the Navigli District in search of new challenges. The reasoning behind this decision being that the presence of water carried with it the possibility of spotting water birds and/or fish?

Two canals (Naviglio Grande and Naviglio Pavese) have been reopened recently. During this “passegiata”[2] I learnt that the Navigli area today attracts people more for its restaurants, bars and fashion shops than for the canals themselves. Interestingly, the majority of those present were contemplating their right hands (a small minority their left) frantically tapping one-handedly while holding their drinks or food with the other.

Although people were in groups they did not seem to notice the presence of their companions! Quite a few also sported misleading telescopic rods, which caused me to briefly think there might be fish in the Navigli, before I realized that I was seeing for the first time the infamous selfie sticks. I spent a few minutes considering how to transform my walking stick into a “bushsnob-selfie rod” so as to be able to share with you some of the special views from future walks.

Our Navigli stroll concluded, I soon became (unwittingly) part of some undercover “cupule spotting”. I was not aware that the maneuver was underway until I found myself in the middle of an ambush: the Basilica of Saint Eustorgio. “What a funny name” was my only thought as I obediently entered, ruminating on the fact that I had never heard of this particular church and had not wished to stumble upon it; yet here I was! Fortunately it was empty and rather cool, providing a nice respite from the heat and crowds.

The Basilica of St. Eustorgio.

The Basilica, rebuilt in the 16th Century in the Romanesque style[3], hosts the tombs of the Three Magi or Three Kings (yes, the same ones that went with presents of gold, frankincense, and myrrh for baby Christ twelve days after his birth). It also hosts the Portinari Chapel that has exquisitely painted frescoes and a cupule with a remarkable chromatic gradient painted in pastel tones that, according to information received “in situ“, represent the radiation of the divine light. The latter bathed the Bushsnob while deep in serene contemplation…[4]

It is not the Bushsnob relic, only deep in contemplation of the magnificent cupula and frescoes!

The spectacular cupule seen from the Bushsnob perspective. 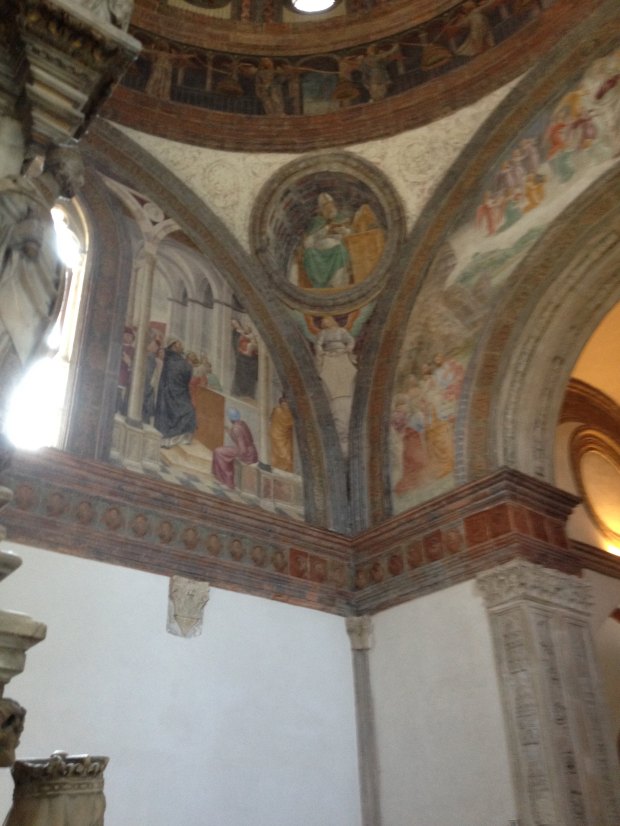 Another detail of the roof.

The Chapel also hosts the intricately carved marble sepulcher of Peter of Verona as a number of other relics including a phalanx plated in gold with the shape of a finger that was, perhaps, the most striking of them all.

A close up of the golden finger.

Our visit over, while leaving the Basilica I spotted a tall column with a statue placed quite high with some oddity about its head.

A more attentive look revealed that it had a sword stuck in it! A students’ prank was my first thought but the height and smoothness of the pedestal would have made it extremely difficult for even the most determined trickster to climb. In addition, the priest that carried the sword appeared accustomed to it!

Wait a minute, let’s have another look. Oh, oh… this is really odd!

Clearly this finding required further investigation. I went back to the Basilica and asked for clarification at the Museum’s entrance. “It is the statue is of St. Peter Martyr”[5] I was informed, which in all fairness should have been obvious as, a few seconds before I had seen his sepulcher within the Portinari Chapel! The provided explanation however did not shed any light onto the Saint’s unusual choice of headwear, which meant that further -independent- investigation, was required.

In brief, Peter was a General Inquisitor that amassed some enemies. In 1252 he was struck on the head with a sharp weapon with such violence, as to leave it wedged in his skull. Incredibly, the blow did not kill him, as he was able to rise to his knees and begin reciting the first article of the Symbol of the Apostles. In answer to this display of resilience, his assailant proceeded to stab Peter in his chest with a dagger.

Although some paintings present a dramatic but credible depiction of the assassination (like the one by Bernardino da Asola) most -like the statue in question and Vittore Carpaccio’s portrait- show a rather healthy looking St. Peter equipped with his unusual choice of headwear in the form of a variety of sharp objects: axes, swords, meat cleavers and even scimitars at various angles and depths together with a dagger stuck in his chest. 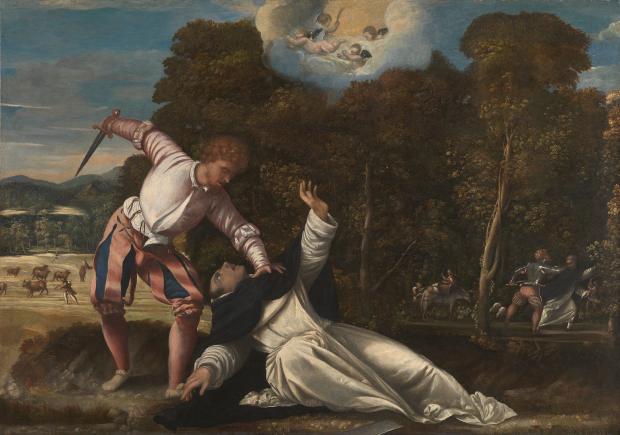 Most incredibly however in the majority of these depictions he appears unaware of his terminal condition and proceeds to ask for silence, walk about, write with his blood on the ground, preach or even look far away, vaguely interested in his predicament![6] It is clear that St. Peter was made of tough martyr material!

Fortuitously for Peter, a number of miracles were attributed to him before and after his demise, which resulted in his fast canonization[7] in 1253.

[2] Italian equivalent of a leisurely stroll.

[3] There is a kind of “church taxonomical system” but I do not think that experts have yet adopted the Linnaeus binomial nomenclature. We will wait and see…

[4] I learnt this observation technique from fellow tourists during my first visit to the Sistine Chapel in the eighties. (It is also useful in the identification of birds, particularly swifts).

[6] A search for “Paintings of St Peter of Verona” should produce a few interesting examples.

[7] Could this have been the first example of a “canonization express”?