After seen so many people with fake fishing rods in Milan (read selfie rods) my hunger for fish increased so, apart from eating mussels at a nearby restaurant, my search was again aided by my daughter who informed me that there was an Art Aquarium exhibition that promised to leave you with an open mouth! The information we found told us that the “Art Aquarium” had been in many cities in Japan and this was the first time that it has been staged outside the land of the rising sun. Its creator is Hidetomo Kimura, who has collaborated with Venini, the glass makers of Venice, since 2012 and the latter has been involved with the glass work of the show. “He (Kimura) is the first and only person to combine art, design, and interior with his life work aquarium” said the information available.

However, we learnt that the goldfish (Kingyo in Japanese) we saw descended from the carps kept for eating that showed some colour mutations (red and yellow) over two thousand years ago in China. These were bred until they became common. The latter in turn also mutated and the fancy Kigyo that exist today were developed, mainly in Japan. Most of them can only survive at aquaria or in fish tanks.

Another type of Kingyo of the many shown.

Clearly the exhibition needs to be seen to be really appreciated, as it is basically a combination of hundreds of goldfish with glass, lighting and music. As our cameras were only those from our phones and light was not abundant, I am afraid that our pictures do not do justice to what we saw.

As a naturalist I believe that, apart from the artistic beauty of what is shown, the secret of including fish into such a show is to keep the biological balance at all times. It must be a very delicate equilibrium that enables the water to be kept crystal clear when large numbers of fish are confined in reduced spaces. Of course this aspect of the show is behind the scenes but it must involve the work of powerful pumps and filters as well as special feeding strategies (the music and prevailing darkness are probably there also to conceal the needed machines!) It is one thing to stage such a show for a weekend and another very different kettle of fish to maintain it for a few months! The thought of the effect of the light on the fish also came to mind! 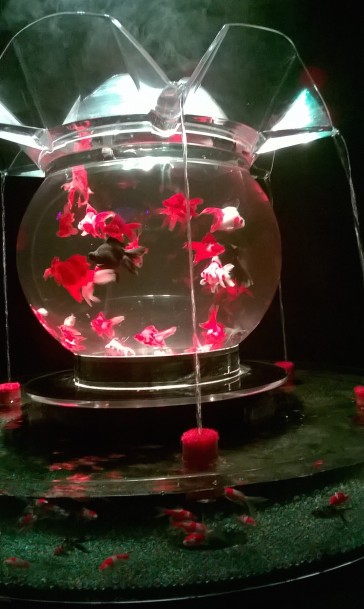 The centre of the exhibition contains several Kingyo, some of which were rather large, of various colours (red, red and white and black) in a large glass water tank. This is displayed using a changing light routine that has an amazing effect. I learnt that it is called “Oiran” that in Japanese means courtesan. It mimics places in Japan where educated and artistic women used to meet during peaceful and politically stable periods that showcased the nation’s good economic growth, known as the Tokugawa period (Edo period) that spanned from the 16th to late 18th centuries.

Another view of the “Oiran”.

Other displays go from illuminated rounded fish tanks that resemble miniature infinity pools with the water maintaining surface tension at the edge of the glass, the “Kimonorium” that, as the name indicates, is presented as an ever-changing kimono design as the fish move and various background shapes projected onto the white outfit.

The “Byoburium” follows a similar approach to show Japanese screens that depict the seasons although, because of the fish movements, they are always different! There are other displays including our favourite: a large fish tank where kaleidoscopic viewers have been placed to show the changing images as different fish swim past! 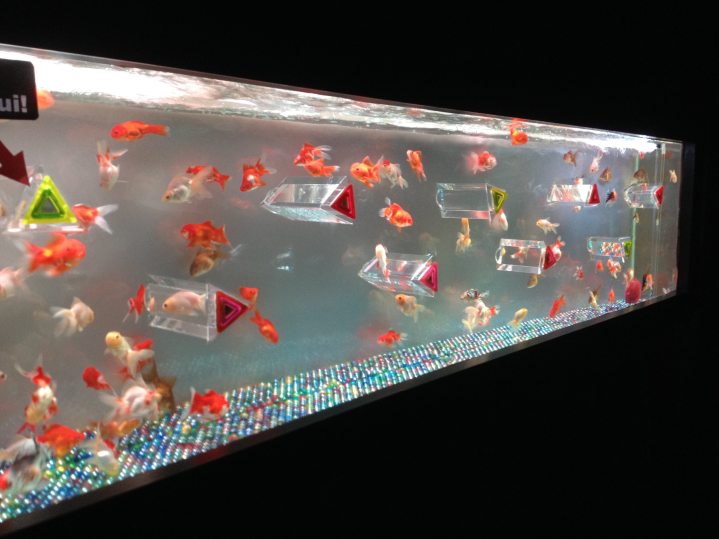 The “kaleidoscopic” tank. The idea is to look through the triangles.

A very beautiful display, but I value the very fine ecological balance behind it even more!

[1] Of the electronic type…

It is back to our Ethiopia days with what I think it is an interesting  story. Bushsnob