While at Masuma dam, we spent sometime identifying a bee-eater that we had not seen before. Fortunately at least one pair was residing at the dam’s campsite and we had time to have a good look and classify them as swallow-tailed bee-eaters (Merops hirundineus). As my new Roberts VII Multimedia Bird of Southern Africa App says, “The deeply forked blue tail is diagnostic”.

The birds were using two trees from which they would launch themselves in search of prey and come back to the same perch to either try again if they failed or to eat the unfortunate insect if successful. Having watched them for a while we decided that we needed a good picture.

My son is keen on bird watching and wildlife photography so he was given the task of taking “the picture” of the new bee-eater. He approached the birds and took a few shots. Not happy with the results, he tried to get a few steps closer and he got two good shots. 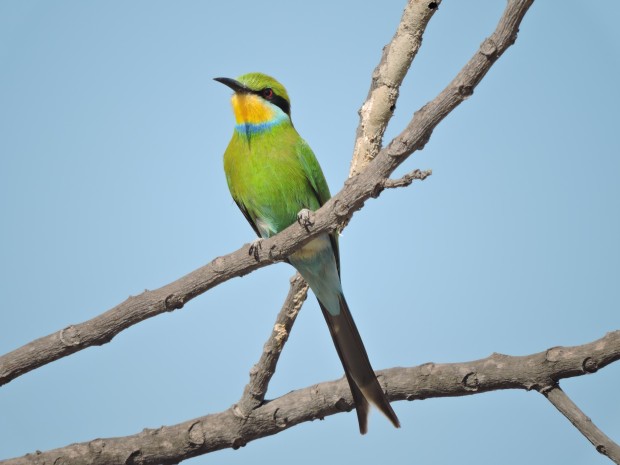 While moving forward still he saw a fly landing on the side of his shorts but he paid no attention to it as his eyes were fixed on the bee-eater. However, when he was about to shoot, the bird disappeared from the viewfinder. Before he could react he felt more than saw a touch on his shorts where the fly was and, to his surprise, he saw the bee-eater flying away with the fly in its beak! Luckily, he reacted fast and took a picture of the fly being eaten by the bird!

The bird with the prey caught on my son’s shorts!

I have seen garden birds coming to feed on people’s hands or even landing on their heads to feed from there but it was a first to see a wild bird being so daring!