While staying at Gwaya camp I explored its surroundings on foot to find a spot where I could place a camera to record what took place when we were not at camp and also to know which animals moved about at night. This camera is my latest gadget and an excellent source of entertainment!

I chose a spot, about two hundred metres upriver,  where two game paths led to the Zambezi.river. The path seemed well trodden and I believed that animals would come down to drink there as, after negotiating a couple of dried mud steps (carved by wild users!), the river could be accessed in relative safety for a drink.

The following morning I got a few videos that confirmed that animals did use the paths. However, I had placed the camera too close to the passers by and the results did not convince me. I decided to move the camera to another place from where a wider view of the spot could be obtained. I returned to camp very satisfied but cautious as I needed to walk round a group of elephants to get back! These elephants are always there so it was no great deal to avoid them as they are tolerant of humans.

The camera in position.

The view from the camera towards the Zambezi.

The plan was to return to the camera the following morning to download the information from the memory card and then decide what to do next.

Early next day we spotted a very large herd of buffalo  moving towards the Zambezi about one thousand metres from our camp (as the bird flies). “Mmmm,  retrieving the camera will be tricky!” I thought and it was not difficult to reach the decision of leaving it where it was for the time being! 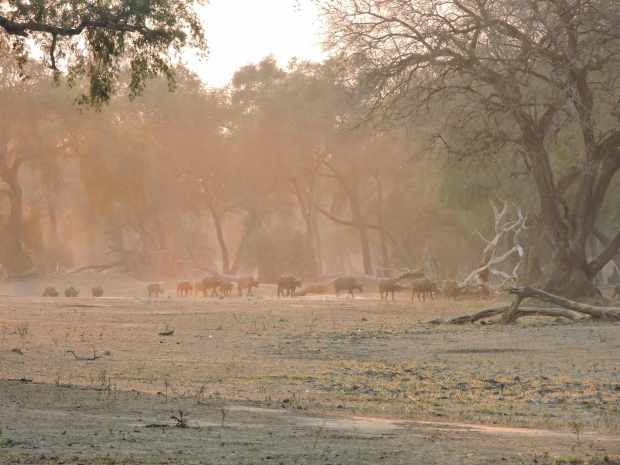 The buffalo marching towards the Zambezi, a few hundred metres from us.

It was a hot day so, after lunch a siesta was a must! I am not sure if I slept or passed out because of the heat but the result was good as I felt rested and, when the temperature started to decrease, we moved off for a drive, towards the buffalo. We spotted them immediately as soon as we came close to the main road. They were spread out, still in the same area.

We watched them for a while while making comments like : “if it is true that lions prey on buffalo, now is the time to find large cats”. We then noted a car parked under a tree, watching the buffalo like us. Or so we thought… When, after a while, we overtook them they pointed out to the side of the road. We had just missed a lioness lying one metre from the track! It was an elderly animal -probably sick- and it was panting heavily. We came back to apologize for having driven between the lioness and the other car, and were told that there were more lionesses and cubs in the thicket, about two hundred metres from us! So much for our game spotting skills!!!

After looking intensively at all possible bushes from different angles we did spot the group. They were four lionesses and three cubs. They had clearly fed recently as, particularly the cubs, had greatly dilated bellies! So we now had elephants, buffalo and lions (three of the big five!) around our camp!

Lioness moving back to the thicket after drinking.

Lion spoor around our camp.

As elephants are very tolerant and the lions had fed, my main concern were the buffalo. The latter had now spread all over the surrounding bush. Clearly the camera would remain in its current location until the animal siege to our camp was finally lifted!

I did eventually managed to retrieve the camera and got some interesting takes that I will present to you in a separate post.

I have inserted (as a page on the right under REFERENCE) a small map to orient the reader on the area we were in. Bushsnob