The view of the Mara triangle in the Maasai Mara from the Oloololo escarpment on the way to Intona ranch.

Despite our busy work schedule we did not work on Sundays. We took the morning to explore Intona and its surrounds as there were always interesting sightings, particularly in the area towards the Migori river forest.

A flooded Migori river at the back of Intona ranch.

A notable tree in the Migori river forest.

After lunch and seeing that there was not much to do I hatched the idea of a spear-throwing contest and mentioned it to Ernest. “What about an international spear throwing competition this afternoon?” “We can have participants from Africa, América and Europe, almost like the Olympic games”, I added. Ernest happily agreed and I got on with the organizing.

Apart from Ernest and myself there were also a Ugandan veterinarian and Kikuyu and Maasai assistants, admittedly both Kenyans but from different ethnic groups. “After all, we are in Maasailand” I thought and we should find a suitable javelin” “Let’s find a good spear and get the throwing field organized,” I said as I was already walking towards the herdsmen camp to arrange the details. “Tommi, I need to find a good spear” I said before I said good morning, and added, “I have an idea”.

He and the other herdsmen knew me by now and they smiled in anticipation. Tommi assured me that he could easily find the right tool as there were Maasai nearby that he knew. Good news! 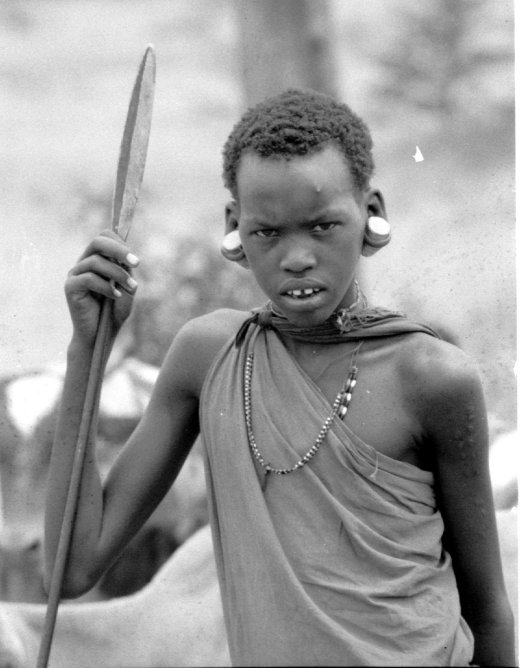 A similar spear to the one used in our competition.

While Tommi strolled through the bush in search for the spear we walked about to find a suitable field where the competition could take place. We found a good site and placed some distance marks while we waited for Tommi’s return. I also went around the farm inviting participants to the event. I managed to engage Joseph (Kikuyu, Kenyan) and Kiza (Ugandan) in addition to Tommi (Maasai, Kenyan), Ernest (Swiss) and myself (Uruguay). We had an international field!

By the time Tommi returned after lunch we were all ready and waiting. He brought a sturdy looking spear that we judged suitable for the task although it was rather long and heavy. It had a long metal blade, a wooden middle part and along steel rod at the end. It was time to start to get done before the daily 17:00 hours shower! 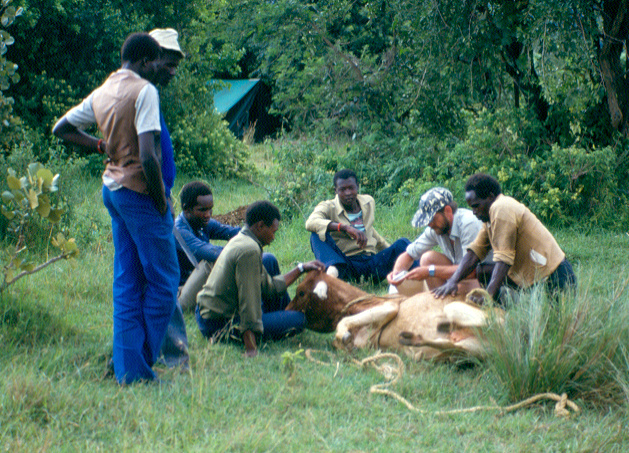 Ernest and helpers examining an animal for ticks. The herdsmen tent can be seen in the background. 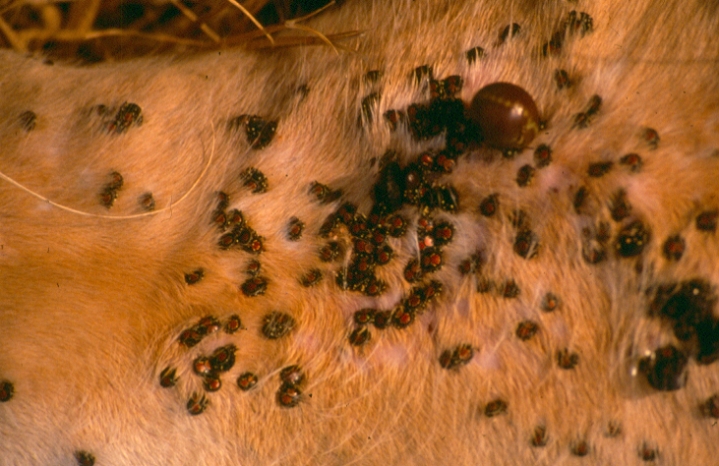 A heavy Bont tick infestation on a heifer at Intona ranch.

All participants agreed at the onset that measurements would be done in paces. It was thought that equal throws were unlikely and the need for laser-aided technology[1] was thought not to be required. No bets were allowed, as just by looking at the competitors, an inexperienced observer should have been able to guess who the favourites were! This did not come to our minds while we warmed-up.

As the start of the competition approached, the tension increased and, by the time we drew our throwing terms, it was almost unbearable… For some reason Uruguay went first, followed by Joseph the Kikuyu representative, Switzerland was third, Kiza, the Ugandan fourth and, a fitting finale, the last to throw was Tommi, Maasai. It may as well as he was the “host country”.

Aware that I would not win I argued in favour of some try throws to get the right balance of both body and javelin but, regrettably for me, the other competitors (unkindly in my opinion) refused arguing that this was not in the rules (?). So, resigned to my fate I grabbed the spear and got ready to do my best. It felt heavy and rigid. I threw it and, the second it left me I knew that there were problems with both direction and distance. It was a rather poor show that landed a long way from the cattle boma and far from my possible personal best. “I have never had any strength in my arms” I said, trying to feel better. “about 20 paces is not too bad for my age”.

Joseph was quite fit although he was from a relatively well off Kikuyu family and this was beginning to show around his midriff. His throw was better than mine but stopped at 26 paces. Ernest, the Swiss researcher turned athlete improved my mark by a couple of paces and Kiza, the man from Uganda, despite his relatively small size, did much better than all at about 30 paces. A big smile lit his face, as usual and a lesson to us all that size is not that important but good technique is!

It was the turn of the Maasailand representative, the final competitor. He was perhaps the most relaxed participant and the one that was enjoying the tournament the most! From the moment he picked the spear we all new that the competition was over! We exchanged resigned glances and head shakes and got ready for an Olympic humiliation! We tried our best to disrupt his throw by talking to him but, he just smiled and replied to our remarks without losing his composure.

He held the spear naturally, balancing its weight by instinct. Almost without running and with a fast and wide arm movement he threw it, almost unexpectedly and even casually. The spear flew high vibrating with a “swiiiiiiisshhhh”. It went beyond our throwing field and over the cattle boma. We lost sight of it but run in the general direction where we last saw it to see how far it had gone. Behind the cattle boma it was the herdsmen camp so, when we fail to find it inside the boma we got more worried and started looking around the camp. There was no trace of the spear anywhere and the camp looked normal. For this we were reassured as at least there were no casualties!

We looked around the tent, near the fireplace, chairs, table, up the trees and all over: no spear! Nothing stuck on the ground, nothing visible up the trees or stuck anywhere. “Another mystery of the African bush”, I thought, or some Maasai magic I was not aware of?

As there was no point in arguing in favour of declaring the throw void on account of it having gone beyond the throwing field or even worse, on account of the disappearance of the instrument, we declared our Maasai warrior the undisputed winner. The absence of the spear meant that there was no possible revenge. This came as a relief as a change of the result would have been unlikely!

I apologized to Tommi for having had the idea that has led to the losing of his borrowed spear and offered financial compensation for his loss. He said that he had thrown it and lost it so I did not need to worry. He will eventually find it he said. I expressed serious doubts but gave him the benefit of the doubt and, as the rain was starting, I moved to our tent.

That night, while we were having our dinner we herd loud talking and laughing at the workers camp next door and went to have a look. The spear had been found! In its wild trajectory it had gone through both the flysheet and the tent and it was embedded in one of the herdsmen’s camp beds, luckily empty at the time of the event! I felt great relief that nothing had happened and a lesser one that the spear could now be returned to its owner!

I cannot remember how I explained the tent holes to my senior managers. Maybe I did not and it just remained as normal “wear and tear”!

[1] I do not think it was available at the time, anyway!