Our final visit to the Zimbabwean bush before leaving for South America took place from 8-10 January, and it was shared with our daughter who is also leaving for Italy later this week.

As usual, we enjoyed our safari in one of the jewels Zimbabwe has to offer. Learning from previous experience, we stayed at Main Camp as time was short and camping during the rainy season is not really a comfortable option! We were correct as it did rain and the sky -thankfully for the hitherto dry Hwange- was waterlogged so we expect and hope that the rains will continue.

Although there were a number of interesting observations during the trip, I will start with the one I feel “inspired” to write about, while I think about how to present the others to you.

Several memories of my past experience with African Rock Pythons (Python sebae) came to my mind when, on reaching the top of the Nyamandlovu viewing platform we were warned that there was a python in one of its corners!

My experience with rock pythons on safari is very poor. In fact, until this find I had never seen one in a national park or game reserve! My only encounters with these magnificent creatures were in Kenya, either first hand or through pictures and/or stories. I recall seeing a picture of a really humongous python (most often and most regrettably killed) that had swallowed a goat at Intona Ranch in the Transmara. It was probably about five metres long and about six people held it up for the picture. That was interesting but a real pity.

On a more optimistic note, we once met a Swiss fellow “safarier” at Meru National Park, also in Kenya in the 80’s, who told us the story of a python swiming towards his little daughter who happened to be near the water. The moment it approached her, the snake stopped swimming towards her! He also mentioned that when he kneeled next to it, the snake resumed its approach, only to stop again when he stood up, suggesting that there is some size-assessment from the python when stalking its prey.

Apart from stories and pictures, I also remember two first hand encounters. On one occasion, while staying at Elsamere[1] in lake Naivasha on a bass-fishing trip in lake Naivasha, other guests spent their time looking for pythons at the lakeshore! I was really sceptical about python-collecting so I was really surprised when two -albeit small ones- were found! I should also add that luckily they were small as my friend Paul jokingly hung them around my neck with the obvious result that I carried the scars of 2 python bites on my upper torso for a few days! I can testify that pythons bite at least as hard as laboratory rats!

The second encounter was when, perhaps inspired by the above incident, Jim, my wife and I decided to go on a python-safari! Jim was a good friend with whom I shared a liking for snakes. My wife does not like snakes so she came for the walk, hoping for a fruitless search! Our trip took us to Hell’s Gate[2], long before it was declared a National Park.

We did enjoy a magnificent walk along the gorge and dry riverbed. It was there, at a narrow, shady and wet passage between narrow cliffs that we found a young rock python that had recently moulted and was shiny and healthy. As until then, finding the python was just our pretext for the walk, we were as amazed to find it as I am sure the snake was to see the three large primates walking towards it!

Enough reminiscing and back to the present safari! The Nyamandlovu pan viewing platform offers a magnificent view of the water and the action that is always present there. This time the action was clearly inside it! The empty half of the platform was clear proof of the snake’s presence, fear of snakes prevailing even among animal lovers who preferred to pack themselves at the other end! 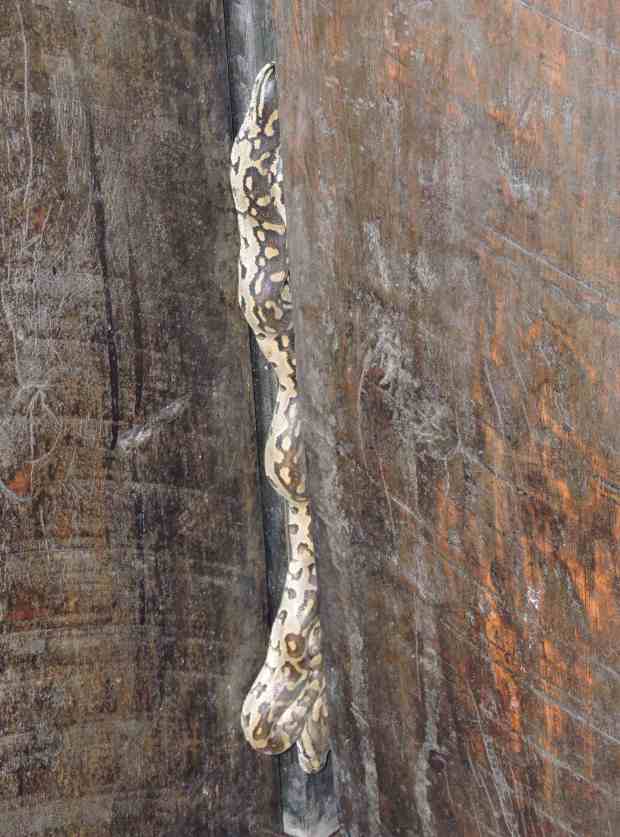 The young  rock python wedged in a crevice of the platform, head down.

We were really thrilled by the news and moved closer to have a good look. The snake was a juvenile. It was comfortably wedged head-down in a gap of the railing, apparently enjoying an afternoon nap[3]. We took a few difficult pictures and sat in the empty corner next to it leaving it alone, happy to watch it every now and then while focusing on the events at the pan.

Regret the leg but it is only for comparison!

Amazingly not one of the several occupants of the platform came to have a look at the snake although all of them were aware of its presence. They preferred a packed platform end while we remained undisturbed at the “snake end”!

Needless to say that the snake did not move while we were there! It was still in exactly the same position when we left at the end of the day, still enjoying life. We were a bit concerned about it being rather vulnerable but hope that it will find its way and we will see it again.

[1] Elsamere Conservation Centre was the home of George and Joy Adamson for a time and it has accommodation facilities.

[2] It was named by Gustav Fischer and Joseph Thomson in 1833 after its narrow cliffs.

[3] Although snakes do not have eyelids, they still sleep by being able to close their pupils and sleep.