After our spell at Matopos National Park in Zimbabwe in November 2015 we continued our journey towards the Caprivi area of Namibia, our final destination. To do this you need to cross the border into Botswana at Kazungula, drive into Botswana through the Chobe National Park and then enter Namibia at Ngoma. Luckily the border crossings were straightforward and we managed to arrive in Katima Mulilo in time for a necessary “safari shopping”.

We remembered Katima Mulilo from our visit in 1992 and did not have much difficulty finding the same hotel we stayed then, on the banks of the Zambezi river. The latter is one of the four main rivers in the Caprivi together with the Kavango, Chobe and Kwando. Often we had difficulties knowing which one we were crossing or looking at!

After an uneventful night at Katima Mulilo, we drove along the Caprivi for a few hundred kilometres to get to Ngepi Camp, on the banks of the Kavango river. From there we planned to explore the Mahango Game Park as well as the Popa falls area. Soon after taking the entrance road to the camp it became obvious that this was a camp with a sense of humour as the sign posts we found showed. 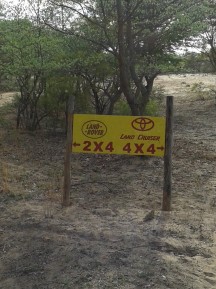 On arrival the camp did not look very impressive as the area outside its fence is severely overgrazed and cattle and goats abound! However, once you got to the camp things changed as, its proximity to the river, makes it a real green oasis with a nice view of the Kavango river and magnificent trees. Things were looking up! This lasted until we saw our acommodation! This time I had made the bookings and, looking for economy and without a lot of time to investigate, I had booked what was called a “Bush hut” as I thought it would be appropriate…

Unfortunately it did not pass my wife’s quality control procedure. The place had all the facilities expected from such accommodation but it was surrounded by thick bush in its four corners! Not only we could not see the river but there was no air moving and it felt like an oven! It was a bad start and we agreed to stay one night while we attempted to find an alternative. Eventually, the staff were very kind in swapping our hut for a house, known as a Tree house. This was a wooden contraption built overhanging the river and it was fresh and had a lovely view of the Kavango and its hippos. I even attempted to fish for tiger fish from our balcony (obviously without success, as usual…).

The large tree trunk came handy to hide from river traffic while showering!

The bushsnob enjoying the view.

The sense of humour that we saw through signposts at the entrance became more “practical” at the camp itself! It clearly specializes in having special toilets and washing facilities that are, to put it mildly, rather surprising! My favourite was the “rocket”, a tower that looked like a water tank that has a toilet seat on top, offering an intersting view of the surrounding area! 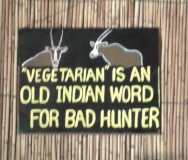 The flower and shower interior. 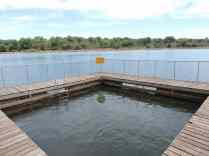 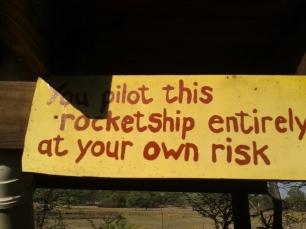 Inside the shower and flower. 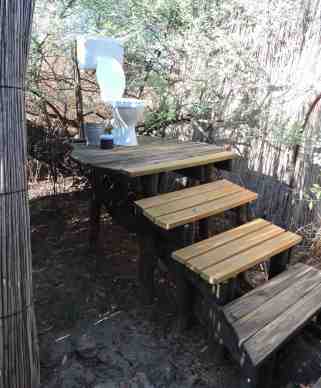 Our accommodation sorted out, we dedicated a couple of days to explore the Mahango Game Park and to visit Popa Falls. The northern section of Mahango was about 10 km from our camp, on the way to Botswana. It offered two tracks, one to the East, following the river and another one to the West, towards a waterhole.

While the former offered a variety of water birds, the road was a bit too far from the Kavango river and viewing was not ideal. Along the road to the waterhole, however, we found lots of elephants, wearier than the Zimbabwean colleagues. This took us by surprise at first as they stood their ground and even mock-charged us on a few occasions before retreating tail up.

The area have had some rains as numerous ponds and mud holes indicated. The elephants were enjoying them fully and, as usual, being the only occupants. We thought that they would be occupying all of them but we were wrong. A rather large one had a very different user: a land tortoise enjoying a swim! It was inside the water when we found it and, as we we approached, it actually swam away, something we have never seen before but not unexpected, of course.

Buffalo was the name of the remaining area of the reserve located across the Kavango. Entering it we drove through military ruins, a left over of the wars that ravaged this area not that long ago. After clearing this rather large area, we joined the Kavango river and drove over black cotton soil, luckily dry as we are well aware of its stickiness from our Kenya days. As if we needed a reminder, we found a young buffalo and an elephant that, mired in the black mud, had starved to death! 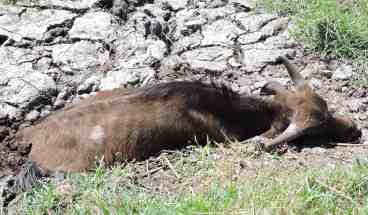 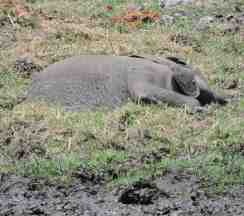 The saying “being in the right place at the right time” came to mind when we postponed our U-turn until the next river bend where we were taken aback by the sudden arrival of an elephant herd that decided to come for a drink and a swim in the river at that particular time! Luckily for us they changed our otherwise dull game-viewing into probably the best entertainment of the trip!

After Ngepi and Mahango we visited Popa Falls and were disenchanted to see that is now been taken over by the Namibia Wildlife Resorts organization and it is much more impersonal than when we visited twenty four years back!

I am afraid that our disenchantment continued with the final part of our trip that took us to the Kwando river area to explore the Mudumu Game Park Not only the Camp Kwando was devoid of character and badly managed but the long drive through the park failed to produce animals, despite the praise from both safari operators and park authorities met. We had clearly run out of luck and it was time to go home!