Kenya became independent on 12 December 1963 when Kenyatta became its first President and Odinga the Vice President. Not surprisingly, in 1965 Kenyatta and Odinga fell out, and Murumbi (Joe) was named Kenya’s second Vice-President for a few months until he resigned in December 1966[1].

As described before, I became involved with Joe through the work we did with Alan Young on tick and tick-borne diseases. He wholeheartedly supported our work. As with all scientific work, a substantial amount of time was spent writing research proposals in order to get the funds to continue with the research. Once the funding is secured, donors visit your field sites to see for themselves the activities being performed with their funds, the conditions of work, applications, progress, etc. These visits are critical for the future of your investigations and that was the way that they were also understood at the institute I was with. This meant that all should go smoothly and a good performance was expected.

I had several such visits but none as important as the final evaluation of our tick programme in the mid 80’s. Laboratory and field work came under the magnifying glass and, as it is quite normal our results were mixed. My part of the bargain was going well as we had good collaborators and achievable goals. Our partner with the highest profile was of course Joe and, in addition, nature was a great partner. Soon the donors knew that Intona ranch and its surrounding area -including the Maasai Mara- were beautiful areas worth a visit and this was good for us and we used it to our advantage!

The organization of a “high level” visit needed lot of work as guests would usually fly to the Maasai Mara where I would meet them and look after them until the following morning when we would climb the Oloololo escarpment and drive about three hours to Intona, hoping that the rains were light and we did not get stuck in the various tricky spots we needed to cross and spoil our trip! Usually our journey would take us to the manyatta (Maasai dwelling) of the Maasai Chief to inform him of our visit and to our GTZ collaborators, if applicable. The visit would last two days during which our work was shown and presented and future prospects discussed in detail. We were of course very fortunate that Joe and Sheila (his wife) allowed us to put them up in their magnificent house.

During this particular visit Joe and Sheila were at Intona. They normally flew directly to the ranch, together with their dogs! Aware of the importance of the occasion they kindly offered to organize a dinner for our guests. This was not an everyday event, but I had joined them for dinner a few times before and I knew that it would be a formal occasion with excellent hospitality and very good food.

The day of the visit arrived and I collected our visitors from Kichwa Tembo Camp, located close to the Oloololo escarpment and, after a game drive that they thoroughly enjoyed in the surrounding area of the Maasai Mara

The Wildebeest moving through the reserve.

-that I knew very well- we spent the night there to leave early morning for Intona. The road was good and, once there, we devoted the rest of the day to visit our field activities. They seemed pleased with what they saw. I was also pleased and looking forward to the dinner to close a long day.

The Intona area is under the influence of the near lake Victoria and it frequently rains for a short spell in the afternoons. As a consequence the sun sets in a cloudy sky resulting in the most glorious and colourful sunsets. Aware of this Joe positioned the house in such a way to be able to make the most of them by having a wide west veranda where we congregated often to talk and have a drink before dinner. That day it was no exception and we joined Sheila and Joe for sun downers and polite conversation until Sheila, the perfect hostess and a very experienced one, announced that dinner was ready. While walking to the dining room she came close and whispered: “Julio, we have a new cook that came with us from Nairobi, I hope it will perform as he has excellent recommendations”. Knowing her standards I had no doubts and told her so. 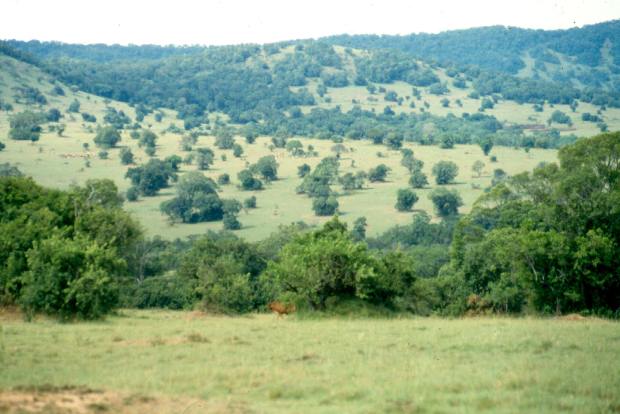 A view of Intona ranch in the Transmara parkland.

The dining room had a door to the kitchen and another one to the enormous and beautifully decorated sitting room. It had the most exquisite antique wooden table and chairs and antique rugs, most probably of Afghan origin, covered its floor. I knew from past dinners that under the rags at the place where Sheila sat there was a bell that she will press in order to call for assistance from the staff. This was her “secret weapon” that enabled her to coordinate things so perfectly that the guests would be amazed. Needless to say that it was a candlelight affair with lots of silverware and crystal!

When the first course came, brought by staff dressed in white with purple fezzes, it was a brownish coloured soup that looked rather disappointing. Trying it did not improve its look: it had a strong curry flavour and it was chilled! “I hope you like our Mulligatawny soup” said Sheila while she gave an approving look to the new cook that was overseeing the dinner from a discreet distance. Your concerns about the soup dissipated the moment your spoon found some submerged resistance that transformed itself in a spoon tip full of cranberry jam. The combination was simply amazing!

After our praise of the soup ended, the staff came back to collect our plates and this time the new cook looked happy and smiley, “the success with the soap was a boost for him” I thought while noting a serious-looking Sheila. By the time the roast beef with Yorkshire pudding and roast potatoes was brought in, the cook was definitely too happy and talking loudly to the visible embarrassment of our hosts. Sheila, used to deal with the highest-ranking world figures, ask to be excused and went to the kitchen, an unusual event. In the meantime, we enjoyed our roast that was really excellent.

Soon, Sheila came back announcing that all was well although she could not hide her concerned expression. We understood her fears the moment the cook opened the door of the kitchen when the staff came to collect the plates. The cook proffered, rather loudly, his hopes that we enjoyed the main course while trying to keep steady. By then we could not help noticing the strong alcohol whiff and knew that the worse had taken place! The spirit meant to go into the cooking had been “diverted”!

Although the guests and Joe were rather amused, Sheila was visibly upset! She excused herself again and went to the kitchen. We could not help overhearing a loud argument or rather Sheila’s shouts! There was a door banged and the sounds of a scuffle. She came back; her usual cool almost lost and red on her face. As an experienced host, she re-gained her composure fast and invited us to move next door to the sitting room for coffee and liquor. I stayed back with her as the guests and Joe moved out and Sheila -unseen by the guests- looked at me as if asking for support and understanding. I made my best “do not worry” gesture and moved to the sitting room together with the guests. She remained behind.

We all sat in the ornate sitting room and overlooked the cook’s episode, listening to Joe. Although soft spoken, he was a great host and a very engaging story teller with great tales and anecdotes from his many years in politics. We listened for quite a while until more noises coming from the kitchen area hinted that all was still not well and then Sheila reappeared –now with a grimace- to announce that the cook would like to say good bye to the guests! “Oh, no”, I thought, “is the situation that bad!”

The cook appeared escorted by the night watchman and a couple of staff and boisterously said “bye-bye!!!” but did not move and tried to say something but what came was a rather loud burp followed by another “bye-bye!!!” After this performance he was immediately manhandled out of the room, still saying “bye-bye!!!” and waving at us until the door was closed behind the group. I still vividly remember his final wave just before the door was shut! Confronted with this final act, even Joe was briefly embarrassed while the guests and I were quite amused!

The following morning Sheila and Joe were leaving for Nairobi and, as usual, I escorted them to the plane to assist them with their luggage, dogs and other items that they needed to take with them. They were sorry for what had happened. I felt very bad to have put them in this situation and explained them that I was very grateful for their hospitality and, to their obvious relief, I also told them that the donors were very pleased with the work and also very proud to have had the opportunity to have met them and enjoyed their hospitality, including the cook incident.

Before closing the door of the plane I spotted the cook. He was seated at the very back, looking penitent. I could not decide if his rather sombre looks were a consequence of his hangover, Sheila’s morning sermons or a combination of both!

The next time I was invited for dinner at Intona there was a new cook!