Important issues such as passport renewal and visits to our family doctor compelled us to leave Salta for our small town of Carmelo in the shores of the river Plate. The night before our departure my wife and I were busy with the packing and other arrangements to leave our farm in good order for our return towards the end of April.

At some stage we were both outside engaged on different tasks when I heard my wife saying, “was that you rattling?” “As far as I know, I still move about freely and free from rattles” was my curt reply, slightly upset by her sarcasm. And then I also heard the noise, an “shhhhh, shhhhh” coming from the garden. “You are right, there is some rattling but is not me” I said to her and added, “I think it is moving this way…” Before I could finish my sentence, my wife interrupted me saying in a voice she reserves only for some creepy-crawlies (snakes, mice, and sometimes myself!) “a snake is coming there”. She pointed towards the general area and that was the last I saw of her for a while, disappearing behind the verandah’s door into the house at a speed.

The snake was in the dark and I could not see it well but I suspected it to be a rattlesnake (Crotalus durissus terrificus) judging by the noise it made. I knew these snakes were present in the area although they are not commonly seen.

I managed to switch the outside light on without losing sight of the visitor that was heading for our house. I was immediately reminded by an invisible wife to keep the back door closed. So it was the snake and I!

Now, what do you do when one of the dangerous creatures from Nature comes for a visit? Ninety-nine per cent of the people around the area will immediately kill it as, reasonably, they regard this as a threat to themselves, children and pets. I could have done this and save myself lots of trouble but I did not!

I watched the snake moving gently towards me and veering off at about a metre from me to seek shelter under one of our large plant vases. I waited and it did not come out so I guessed that I would have sufficient time to run into the house, get a hook from the fire place and come back to check on it. I did and it was still there so I decided that I could now search for our “chameleon box” that was somewhere in the house. Luckily I found it quite fast so I was ready for the capture. 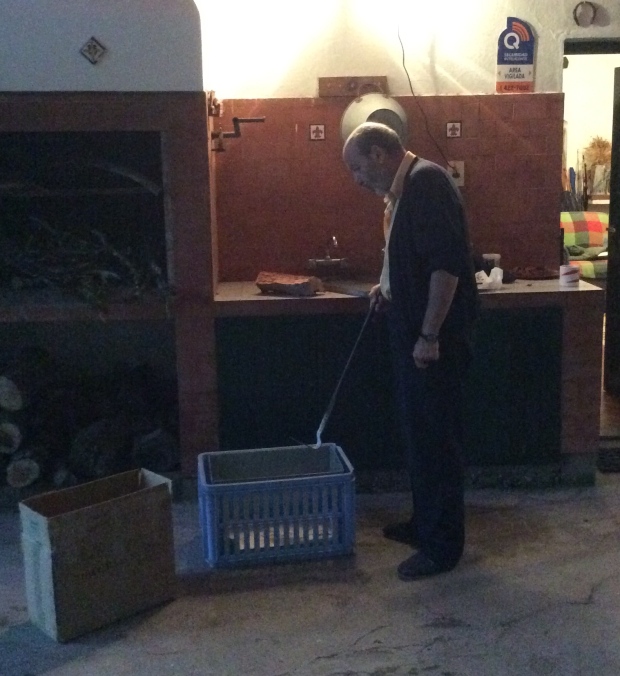 The bushsnob with the fire hook. 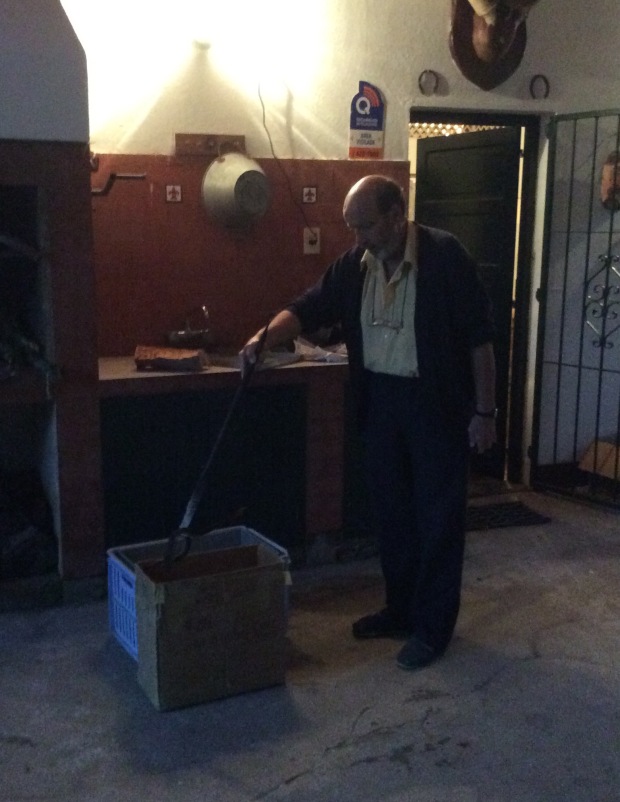 Hooking the snake and dropping it into the chameleon box.

The rather large pot was moved to get a chance to hook it but, as expected, the snake moved off but I managed to hook it and lift it inside the box, rather skillfully I thought, pleased with myself. The box was perfect as it is very well built, with a glass front and a metal grid on top. The snake was secure and safe. I won the first round.

After a detailed conversation over dinner I managed to convince my wife that the best course of action was to release the snake far from our farm and, after lot of discussion, a distance of about 4 km was considered safe, as it would be difficult that the snake would return! My victory had a pyrrhic side to it, as now I needed to move the snake from its present location to a suitable container so that I could carry it away.

I considered the various options and settled for a cardboard box with high walls as to avoid it from climbing out before I closed it safely. I like snakes in general but I respect poisonous ones very much so I like to play safe and keep a good distance to avoid surprises!

Luckily the following morning the snake was probably cold and scared so it allowed itself to be lifted from the cage into the box rather easily and I even had time for a picture taken by my wife. (Between you and me, it was trickier to persuade my wife to take the picture than to handle the snake into the box!).

Safely inside the box. Luckily the snake was more scared than I.

We then loaded the snake at the back of our pick-up and departed for Uruguay stopping after 4 km to let it go. I opened the box, readied the camera and expected an elegant exit to take a few pictures to illustrate this for this post. As the snake did not leave the box after a couple of minutes, I tilted it and the snake finally slid off, still coiled up. However, before I could even think on a picture, it took off at a speed, luckily away from us and into the bush. I had no time to take a shot but, amazingly, my wife did, I am not sure how!

Releasing the snake 4 km away.

The snake would not come out.

After tilting the box, the snake, still coiled, slid off.

The snake took off at a speed towards the bush.

After watching the snake getting into some cracks in the rocks and out of sight, we rattled off.