I guess that the use of apps in African game parks was unavoidable as I am sure these already exist in parks in the “developed” world. Well, they have now arrived to the delight of the bush snobs (please note the space between the words) and bush executives that, not happy with looking at the sighting boards in the South Africa’s National Parks lodges and camps, required something more efficient.

A couple of years back I got the first indication that times were changing when a friend gave me -for my birthday- the app for Roberts VII Multimedia Birds of Southern Africa iPad Edition, 2012-2013. Although I have misgivings about using a tablet for bird identification rather than my loyal Sassol guide, I tried it. The result is that the Sassol guide is collecting dust in a recess of the car!

I have to announce that the same did not happen with the newish apps that -like with Pokemons- show you where the animals are so that you do not waste your valuable time driving around and can go to the hot spots straight away while the normal (or now abnormal?) game viewing enthusiasts “sweat the fat drop” (as we say in Spanish) to find interesting animals!

On a previous visit to the Kruger National Park I had heard that visitors were communicating interesting finds among them through a cellphone system. So, this time I searched the apps store and found a few and even some free. I downloaded one that looked popular called “Kruger Sightings” before our visit to this park. 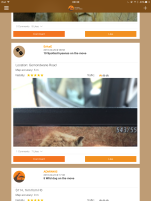 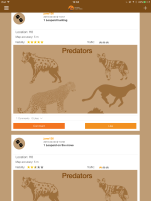 The results of the search.

The app is very straightforward to use and its information comes from what the users themselves feed in. After entering the park you are visiting and the kind of animals you wish to see, the programme will give you live updates with details of what is being found, where and other details of the sighting. It reminded me of a similar app from Brazil where users enter information regarding the location of speed traps and Police check points so that motorists can avoid them!

We followed the information it provided and easily found several other people watching what was alleged to be there! A leopard was the animal to be watched at the time and, after a long wait, we managed to progress through the traffic jam until we saw some spots up a tree!

The “find” following the app’s directions!

What we saw after vying for position and an enlarged view for your benefit. It was really a case of “spot the leopard”!

After that first experience, we switched off the app for the rest of the safari. However, many visitors seemed to be using this and/or another similar app. We observed them drive from sighting 1 to sighting 2 at the maximum allowed speed and, as with our first trial, we found them “en masse” at the different locations where animals were supposed to be! I imagine that they did not wish to waste their lunch or dinner times?

Luckily for us and other “purists”, every cloud has a silver lining! The producers of the apps had, unintentionally given the no users a great advantage. The app groups its followers around a few of the big five, mainly lion and leopard, leaving the rest of the park for us to drive around in relative solitude and being able to find animals without cars around them. Luckily, with patience, luck and good eyesight, we managed a few good sightings of our own. Of course, our they remained incognito!

Some of our findings (not reported!). 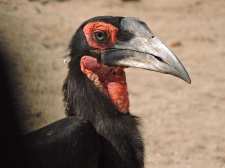 I promised myself only to use this kind of apps the day I become so important that I need to jet to parks with a few hours to spare and wish to impress some important client. I think that there is no fear of this so our game spotting will continue to be done the hard way!

The future worries me though. Rocket science is not required to see the gradual decline in animal numbers that elaborate and costly surveys and studies will confirm three years from now, three years too late to take any meaningful action! I know this sounds negative but it is what we observe.

Regrettably, the present generations had not really seen how it was, as I did not see how it was either but I guess it was better than what I saw!