Having stressed the negative consequences of a drought like the one the Kruger National Park is going through in the previous post (3/10/16) it is now the time to mention one of the positive aspects of this situation for the game-spotter.

The lack of grass transformed the thicket into a very dry wooded savannah. In addition, the riverine areas that usually offer some cover to herbivores were now denuded from a lot of the vegetation so there was a lot of visibility. Most animals were near the river as most need to drink regularly so most of the “action” took place there.

Even without the assistance of the existing apps[1] we were able to find lions and leopards in numbers that are usually unthinkable, even for my wife.  11 September 2016 will go down in our bush lore as the day of the cats! In the morning, during a 20 km drive we spotted three different groups of lions, two separate leopards on trees and two walking by the river! We almost did not stop when we found a hyena walking by the road! As if this would not have been enough, after (my) siesta time, we revisited the nearby causeway over the Lower Sabie River to see if anything remained of the zebra being fed on by crocodiles of the day before.[2]

We crossed the bridge but found no trace of the zebra. As usual, there were a few cars on the bridge so we decided to turn around and, after re-crossing the bridge, to do a short drive following the river to enjoy the evening. By the time I had turned the car around all other vehicles had gone and we were on the bridge on our own, a rare occurrence.

As the bridge is narrow, I was paying attention to my driving when, just before ending our crossing, I heard my wife saying, “Look!” A leopard had just appeared out of nowhere on the shore of the river. I switched off the engine and we both grabbed cameras and took the pictures we could as the animal did not stop much and never took notice of our presence while it crossed the bridge just in front of us! 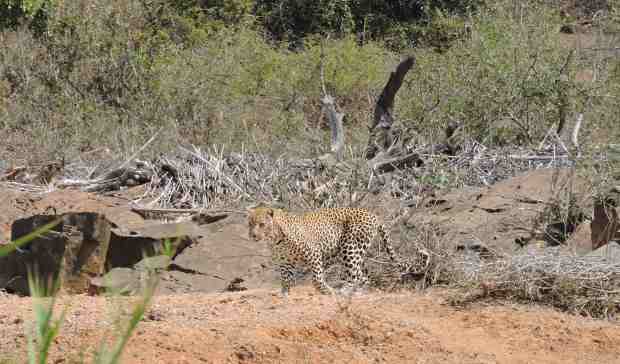 The first picture of the leopard.

It was a large male and its right hind leg was apparently painful as it was limping. 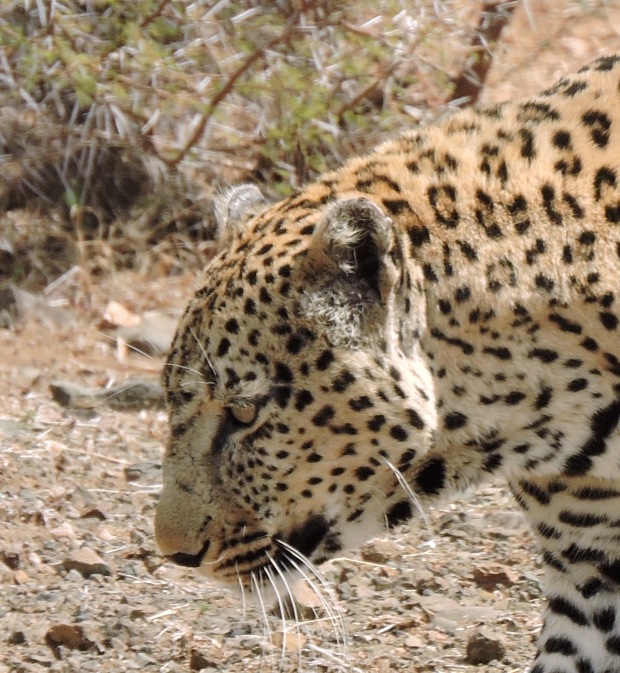 The sighting did not last more than three minutes and, by the time a few vehicles arrived to the bridge (that we were totally blocking), the leopard had moved off and it was hardly visible, although it had been spotted by others! I decided to move on and “share” our find only to realize that the car was dead! Suspecting a disconnected battery terminal I got out of the car to fix it. Although it did not take much time to get the car running again, by the time we moved off, the leopard had already disappeared and I was probably the least popular driver in the park!

Although the 11th was our most productive day, over the next couple of days we continued to find predators. We also continued to have problems with our battery! So, when I needed to get out of the car to fix it next to a group of lions, we decided that it was time to take the car to Skukuza for a long-lasting solution! This we got from one the very helpful camp mechanics that, with the right spanner, tightened the nuts and ended the problem for good.

Luckily the lions were more interested in their romance than in the bushsnob fixing the battery!

Feeling now safer, on the way back to Lower Sabie Camp my wife (who else?), continued to excel and spotted more cats! The first sighting took place after we both noticed a few vultures on the ground by the Lower Sabie River. While I was watching them my wife noted that the cause was a buffalo kill where two magnificent male lions were feeding! Frankly, I would not have seen them. 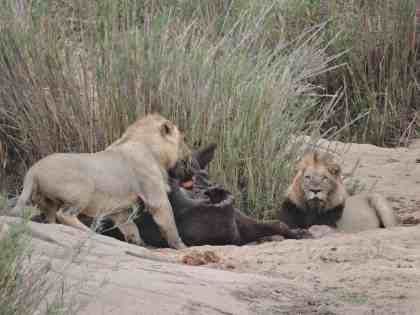 As road speed limits and gate closing times in the park are very strict, we decided that we needed to start our journey back to arrive to our camp in time. Our planned timely arrival only lasted a few kilometres, until my wife spotted yet another leopard!

This time it was a female sunning itself on a rocky outcrop overlooking the river. A beautiful sight worth risking a fine from the park as we both agreed. It was beautiful to watch the animal with the evening light and we stayed there until it decided to move off and we lost it. 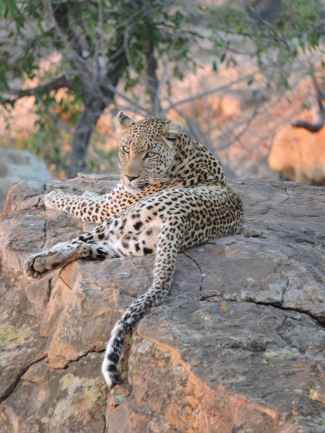 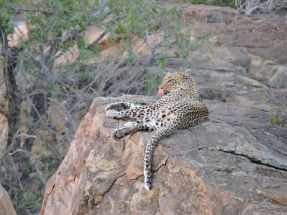 Aware that we were late, we prepared our usual excuse of engine malfunction (this time it was quite close to the truth!) and returned. Luckily we just managed to squeeze through as the gates were being shut!

That night, staying at one of Lower Sabie’s tents paid off. Despite the rather sad absence of hippo grunts, the elephants were noisily feeding nearby and they were very vocal. Later, several lions started roaring up and down river, their loud calls amplified at night and the chorus continued well into the night. At some stage, a leopard joined in with its own regular grunts ending in an amazing ensemble that we do not recall having heard before. We were late sleeping as did not wish to miss the wild concert!