It was during a “pit stop” while returning from Mana Pools National Park to Harare in August when we found an interesting beetle aggregation. As usual, it was my wife who detected the “funny-coloured leaves” on the tree. 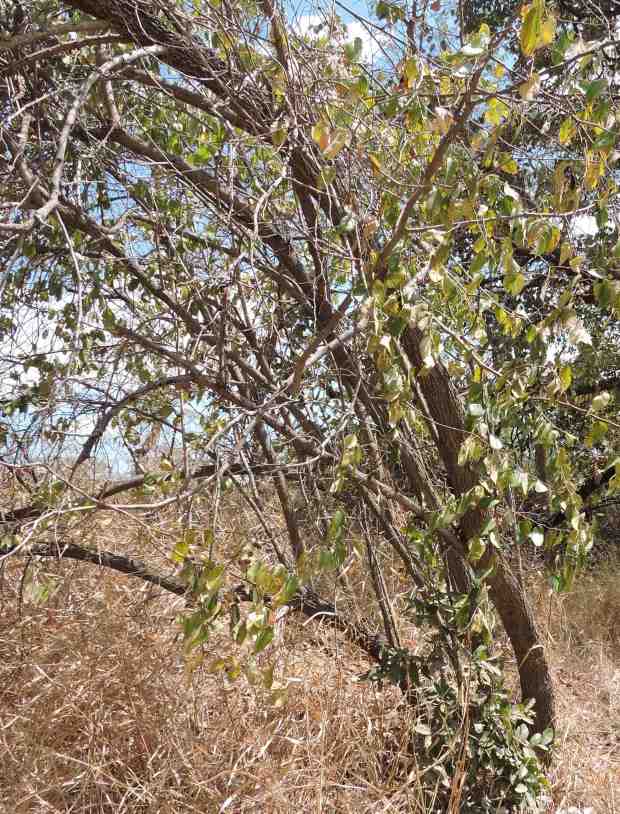 The tree where the bug meeting was taking place. The bugs are the darker spots on the right.

We had a good look at the tree and took a few leaves and fruits from it to see if we could identify it. We also took pictures and videos of the insects as it was a really interesting find. Later, after some time we decided that the tree was a Buffalo-thorn, Ziziphus mucronata. Thinking that the finding was interesting, I followed it up and consulted the experts.

I sent pictures to the Biosystematics Division of the Agriculture Research Council-Plant Protection Research Institute in South Africa from where I got a very helpful response the following day! Luckily, they agreed with our tree identification and clarified that the beetle was in fact a bug of the Plataspidae family and not a beetle. 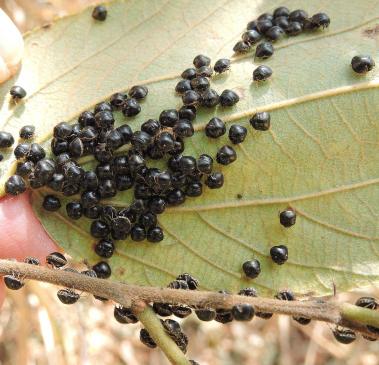 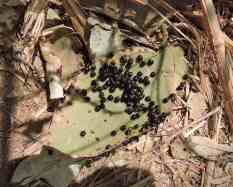 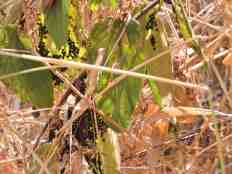 Close-up view of the bugs. 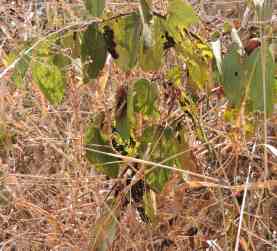 The tree where the bugs can be seen aggregated on its leaves. 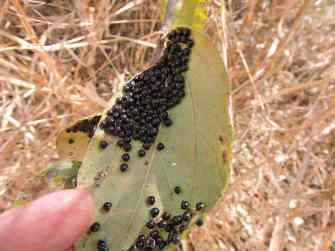 As expected, to positively identify a bug through photographs is not really possible. However, the creatures’ identity was narrowed down to either Brachyplatya testudonigra or B. rubromaculatus. However, more important than the identification was the fact that the bugs were swarming, not a common phenomenon.

Things then turned a bit more scientific when I tried to get more information on swarming and learnt that Sithole and Oelofse (no date) described the rather unusual swarming of the green stink bug, Piezodorus purus. The latter was observed in several areas of the Kruger National Park but their aggregation reached large numbers at the Mooiplaas area where the bugs became a nuisance for the park personnel living there.

I also learnt that there is actually a stink bug considered to be a delicacy! This beast, aptly named the edible stink bug (Encosternum delegorguei) found in northern South Africa and Zimbabwe, does swarm during years that the conditions for such event are right (Stiller, personal communication). If interested, Nelwamondo (2015) gives very interesting information on this species.

Sisterson (no date) mentions insect aggregation in general as a phenomenon that obeys to three main reasons:

The aggregation pheromone is responsible for this behaviour that, although it can be used in pest control it can also have deleterious effects on some attractive insects such as butterflies as their aggregation sites get degraded with the risk of their number diminishing below critical levels.

The behaviour observed in the Green Milkweed locusts (Phymateus viridipes) reported earlier in this blog[2] was probably migratory as they were not feeding on the cacti. However, feeding is another reason for insect aggregation. Stiller (personal communication) mentioned that he has observed leafhoppers swarm on the trunks of trees, that are probably their feeding plants and the pest Bagrada hilaris, can occur in very large numbers on feeding plants.

The introduction of the bean plataspid, Megacopta cribraria, into the United States in October 2009 has attracted considerable research on this bug as it has become a pest of soybean in Georgia and South Carolina (Poplin and Hodges, 2015). These researchers mention the overwintering congregation of the bugs on buildings as a possible nuisance, a similar situation as the one described above that took place in the Kruger National Park.

It is interesting how a rather casual observation of a cup of coffee stop during a road trip could develop into a motivating investigation on the aggregation behaviour of insects. Of course, after all the reading and writing, I still do not know the exact nature of the bug but I learnt something about the biology of the plataspids, a group of insects I totally ignored.

The assistance of Elizabeth Grobbelaar and Michael Stiller of the Agriculture Research Council-Plant Protection Research Institute of South Africa was critical in checking the identity of the bugs.

Sisterson, M. (no date). Insect Aggregations; The Phenomena Itself, Why It Occurs, And Its Implications To Us. Accessed: 15 Oct 2016. http://www.earthlife.net/insects/aggregat.html