While walking in our neighbourhood we came across an interesting find. A small beetle had been impaled on a thorn of a fever tree. It looked like one of the abundant blister beetles so I was not too worried about it. Although it was the first we had spotted, it is not a surprise as we know that a few shrike species are present around our area.

Shrikes are carnivorous birds that, despite their small size, can tackle much larger prey than the beetle we found. We had seen many impaled insects while in Kenya.

One of the “skewers”, the Common Fiscal (Lanius collaris) have been reported diving for tadpoles and small trout and they eat a variety of prey including snails, moths, lizards, chameleons, snakes, frogs, rodents and other birds, even as large as a laughing dove![1]

The find reminded me of another interesting accident that we witnessed years back while visiting Tsavo West National Park, although it was clearly unrelated to shrikes!

It happened while on a game drive near Kilaguni lodge. There we always stopped to watch a tree that marabou storks (Leptoptilos crumenifer) used for roosting as it was nice to observe their preparations for the night.

That afternoon, we noted that one of them was in an odd position. It was immobile and swinging with the little wind there was. Closer inspection revealed that the poor bird was impaled from its gular sac on one of the powerful thorns of the tree. 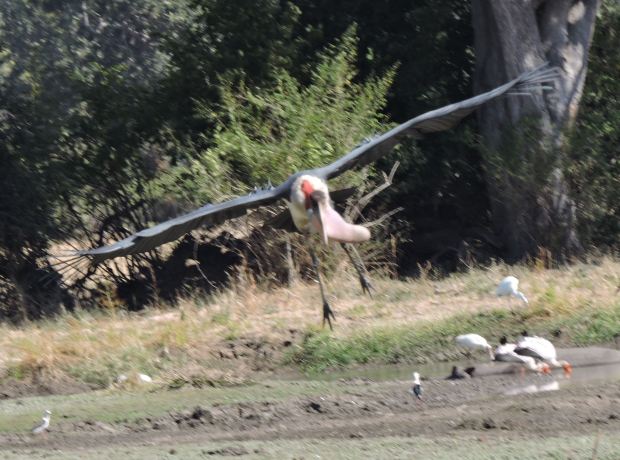 A good shot of a Marabou’s gular sac in Mana Pools, Zimbabwe.

It was a very unusual find and up to today we debate the possible reasons. The most likely explanation is that it somehow got its sac hooked on a thorn and it was unable to extricate itself from it, dying in the process. Luckily, I found the only picture I took!

Not all is nice in the bush but, again, Nature is like that.

Finally, after a few weeks I managed to finish a new post on Zambia. I hope you enjoy it. Bushsnob