Puma, Puma concolor, are usually quiet and therefore they can live with humans undetected as solitary predators feeding on medium sized and large mammals such as deer and agouti but also on smaller prey such as snakes, hares and rats.

Puma are the most adaptable of all wild cats in the world and inhabit many climates: boreal, tropical, desert and rainforests and they are equally at home in lowlands or mountains. Shy and suspicious of humans they are rarely seen.

Our farm in the Yungas of Salta is home to wild cat (Oncifelis geoffroyi), ocelot (Leopardus pardalis), jaguarundi (Herpailurus yaguarondi) and puma[1]. Luckily, there are still wild areas where these animals can dwell and the agriculture frontier is not yet here so no many incidents with livestock predation occurs.

Although we have never seen a jaguarundi or an ocelot, we have seen a skull of what we believed belongs to the latter. 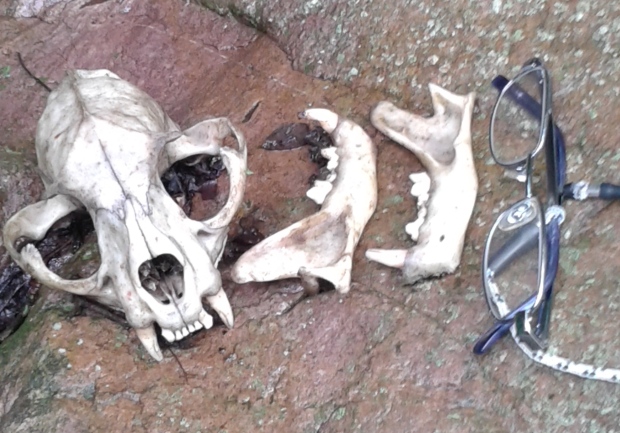 A few years back the family (while the Bushsnob worked away in Bolivia) bumped on an adult puma that crossed the road in front of them about one km from our farm while driving at night.

As you can imagine, after such a find our farm went up in our estimation, as, at the time the cat was observed, we were not sure about being able to return to Africa.

Aware of our exciting animal neighbours, checking all footprints we see is the norm. Although most of what we see belong to the various domestic dogs that are kept by our neighbours, occasionally we find some that clearly belong to felines, particularly after it rains.

It did rain on the night of 12 to 13 Feb 17 but the morning started sunny so we went for our usual walk to burn a few calories and to get our telephone signal located three km away at a place known as “The Cross” where a wooden cross remembers a past fatal accident.

Returning from the walk I stopped to photograph a butterfly and noted two footprints. They had no sign of nail marks and the larger one was 9 x 7.8 cm (foto). Our first thought was that they could belong to an ocelot. However, when we checked them in our mammal book[2], their size coincided with those of a puma although, as usual, some doubts remain.

Some of the footprints observed now and last year at the same time. 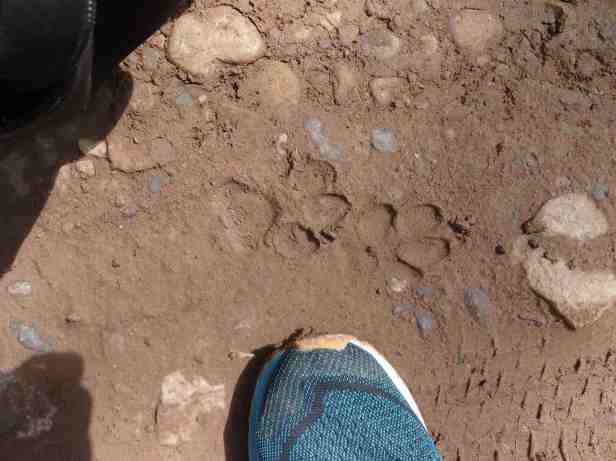 Whether they belong to what we suspect or not, it is a great pleasure to be able to walk on a road where you can find such footprints and believe that such animals are around you in the thicket, probably watching your movements!

A short story from Ethiopia. Bushsnob