I will be unfair if I would not say a few words about our VW Kombi. It seems that these days these vehicles still attract quite a lot of attention among car lovers. Although I never saw it in this light at the time we had it, they dominated the minibus market and most of the Kenya safari companies used them. Then VW came up with a new model that was not as good for rough roads as their back doors became undone and needed to be welded to keep them shut! Very soon afterwards the Japanese minibuses replaced them.

A young-looking Bushsnob posing with the kombi after driving through a muddy Maasai Mara Game Reserve.

The Kombi had, like any vehicle, good and bad features. My first concern was safety, as I had never driven a car with the engine at the back and I felt rather vulnerable in case of an accident, particularly the way driving in Kenya was in those days! I also needed to fit seat belts, surprisingly absent in a UN vehicle! Its lack of 4WD was another rather serious drawback and I recall several instances of getting stuck in places that a 4WD would not even have skidded! 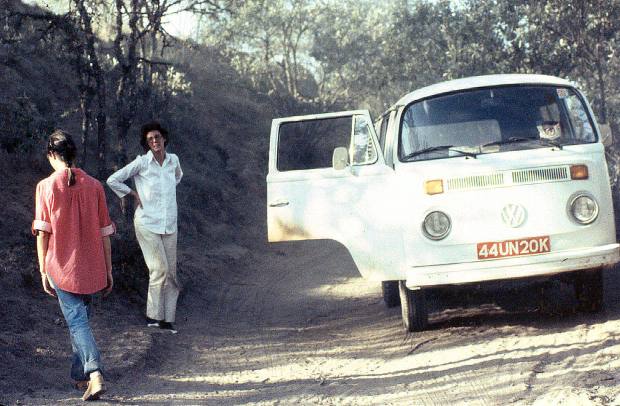 My wife (red shirt) and our friend Aurora resting after pushing the kombi out of the sand at Naivasha. July 1982.

One particularly bad instance was at Amboseli National Park when, trying to approach the swamp to get a better view of an elephant, we ended up into soft black cotton soil. This kind of mud sticks to your wheels filling their threads so your tyres soon become smooth! Fed-up of fruitlessly attempting to get the car unstuck I placed our BBQ grid under one of the wheels to see if I could get some better grip. It was good and bad. We got out of the spot but the grid got somehow ejected with such force into the thicket surrounding the swamp that we never found it again and had to cook our chicken on a stick that night!

Stuck again! This time on a rainy day at Tsavo West National Park. My wife -with the raincoat- and Paul lifting and digging to place the spare under the wheel to get some grip.

It also had the rare ability of losing traction and stopping while driving slowly over a gully or when crossing a culvert diagonally as its chassis somehow would get twisted leaving one wheel in the air spinning hopelessly! In order for the car to move again it needed the assistance of one passenger to stand on the back fender and sometimes to jump in order for the offending wheel to grip and the car to move. While this was not a great problem, imagine doing it on a ditch full of muddy water!

Snapping the clutch cable was another “Kombi special”. As you can imagine, this cable needed to transmit my left foot’s instructions for quite a distance before it reached its destination so it was a weak feature and one that left us stranded. Luckily only once. Eventually, apart from learning to fit a new cable and carrying a spare, I learnt to operate without the clutch thanks to Joseph, one of the Muguga herdsmen that taught me how to start it and drive it without a clutch! I would engage second gear and then start the engine. The car will shudder, shake and jump forward until it got going. After a while you could change gears upwards if you knew the right speed. Changing downwards was not easy so stalling at stop signs was unavoidable! Although not a long-term solution, it would get you back home or to the mechanic.

On the side of its virtues, it had great ground clearance, a reliable engine that never had a problem despite its mileage and, being two of us, it also had lots of space to carry supplies and materials for my work as well as to take all of our gear on safari (and that is a lot and increasing!). Removing the second seat we could sleep inside if the circumstances so demanded. Its sliding door made for great game watching; particularly driving around lakes (with the door facing the lakeshore, of course) enabled superb birding.

I drove the car intensely between Tigoni, Nairobi and Muguga during the week and all over Kenya during the weekends. That particular morning I had come to Ranjini´s house to bring her some vegetables that I got for her in the Limuru market, close to Tigoni. The clutch cable had snapped while entering her house but then there was worse to come…

Ranjini worked as a scientist with the then Overseas Development Administration (now the Department for International Development of the British Government attached to the Kenya Agriculture Research Institute (KARI) in Muguga where she also lived. We had met while sharing accommodation at Muguga House, KARI´s visitors hostel [1].

“Clutchless” I crawled into her garden and did a jerk-stop. Although I carried a spare cable and I woud have been able to fix it then, it was not a short exercise as its calibration took a while and I needed to get back home. Further, we had plans to travel far in a couple of days so it needed proper fixing. So, having given Ranjini her shopping I assured her that I would be fine and left her rather worried by means of another jerk-start departure.

With my mind focussed on keeping the car going I forgot to fasten my seatbelt, an essential precaution when driving in Kenya. I was going very slowly down Ranjini’ s driveway when I decided to buckle up. I had never noticed that particular pine tree but I am sure that it had been there for many years and not moved much so it was not the guilty party! Neither had I seen its protuberant roots reaching towards the driveway. I still did not that day, I only felt them!

Everybody know that buckling up in movement is not recommended. It requires a few seconds of focusing your mind on the belt as well as some handless driving. A lot can happen over those few seconds. I remember feeling the left wheel rising over the roots and, as I tried to break, the car shuddered, stalled and stopped. However, in a bewildering feat, it gradually started to tilt towards mi side. My surprise quickly turned to panic and then resignation: the car was falling on me in slow motion.

My immediate thought was to try to stop it by sticking my hands through the window but -luckily for me- events happened faster than my thoughts and a thump followed by a shower of spanners, driving licence, car book, nuts and bolts and all things that one carries in a car’s shelf fell on me! The Kombi was now securely resting on its right side and only the door separated me from the ground that I could touch as my window was down.

It was an upset Bushsnob that emerged through the passenger’s window! Once outside I could contemplate my sublimely stupid achievement and promised myself never to try the seat belt trick while driving again. To say that I was also embarrassed when I walked back to Ranjini’s house is an understatement. She had just sent me off and closed the front door and I there I was again! I am sure that she thought I had forgotten something. When I told her what had happened, her expression changed dramatically! “Are you all right?” she asked with genuine concern. I told her that I was fine and invited her to come and have a look at my masterpiece!

We walked to the beginning of the driveway and we had a clear vision of the Kombi peacefully resting on its side! She gasped and while she recovered, I asked her if Njuguna, her gardener, was around. She immediately called him. He came and joined the unbelieving crowd expressing his regrets.

“Njuguna, please give me a hand to put it up again” I said estimating that most of the weight should be on the underside and therefore not too difficult to bring the car back to its normal position. Looking somehow doubtful he came along. Although I did not look at Ranjini, I am sure that her expression had changed to amusement! I could not blame her.

The effort required to put the car upright again was easier than I thought and the car bounced on its wheels as it got upright again. Apart from a broken side mirror and a few small dents and scratches on the side, the car was in good condition and driveable. I thanked Njuguna, said farewell to Ranjini, buckled-up, jerk-started it and drove off, still upset at my stupidity.

It was only weeks after the event, after I had replaced the mirror and got the dents painted that I could see the funny side of this rather freakish accident that even today I find rather incredible. I regret not having a picture of the car and the faces of my rescuers when they saw it to show it to you. It was all memorable and -in retrospect- quite funny!