To witness a lion kill is, despite its perceived cruelty, a highlight for the safari lover. We have been lucky to witness several kills and many more attempted kills during the many years that we have visited the bush. But the first one is the one that remains most vividly imprinted in your mind, particularly if it happens in full view and you witness it from a few metres away.

It happened in the Maasai Mara in the early 80’s, during one of my first camping experiences with Paul. We happened to be driving along monitoring the wildebeest movements when we saw a zebra limping badly. At close quarters it was clear that the animal had -somehow- damaged a front leg. Aware that wounded animals did not last long because of the large predator population in the area, we decided to wait for a few hours to see what happened.

We knew that a large pride lived in the area.

At some point the zebra -a group of 8 to 10- stopped grazing and started to move. We followed. I was at the time sitting on the roof rack to have a better view of the plains so it was me that spotted the reason for the zebra nervousness. They had spotted a lioness watching them from a distance. The intentions of the predator were clear as she was walking in a general direction that would -eventually- get to the group of zebras. Excited, I prepared my camera and waited.

After a while we realized that in fact there were several lionesses and that, somehow, we were in fact used as part of a pincer movement from the huntresses! After about thirty minutes slowly following the zebras, we saw them break into a trot and, before we could see much more, they were galloping so we moved faster while trying to anticipate the event.

Suddenly we saw that the hunted were trying to avoid a second lioness that, after moving for quite a distance through a donga [1], was cutting diagonally and at full speed towards them. Things were now accelerating and so did the car and my heart while I held on to the roof rack while trying not to lose my camera or falling off myself!

The zebra were now at full gallop when, suddenly, they scattered in all directions, I am sure that this had something to do with confusing the chasers. However, as expected, the injured zebra was the target, being slower than the rest so the lioness -now joined by two more some distance behind her- was closing in. So were we, despite the irregularity of the terrain that was no obstacle for our excitment!

Soon it was clear that, despite the zebra’s final spirited effort, the chase outcome was a foregone conclusion as soon as the lioness reached the zebra and managed to place one paw on its rump, the zebra lost its equilibrium and crashed down to the ground while the lioness immediately reached for its throat. Luckily there was lots of grass and no dust so we could observe the action clearly. After a few seconds another lioness arrived and helped the first one to anchored the zebra down.

My first picture from the moving car shows the moment the second lioness joins the kill. A third one is seen coming in the background.

A better photo once we stopped.

A better take once we stopped. 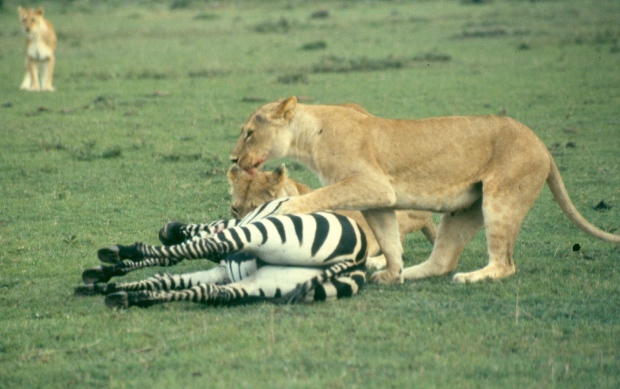 Mesmerized by what I was watching and photographing, I was still on the roof rack by the time we stopped to watch them only a few metres from them! Although they were clearly not interested in me, somehow I managed to dive into the car through the open window (not easily done with the sliding window of a Series II Land Rover but clearly possible under duress!). Once inside, I continue to watch the action and take more picturees. We were both speechless while more lions kept coming from various places to join the kill.

The arrival of the male. The white foggy marks are the windscreen wipers. 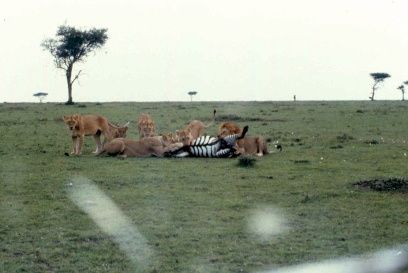 My romantic view that a lion kill was a clinical affair where the victim dies fast and in shock was shattered. The zebra took several minutes to die, while the whole lion pride arrived and some of them started to lick it while the animal was clearly alive although in deep shock by now. Eventually it expired and we were fortunate to have enough time to observe the interaction of the various members of the pride, including the arrival of the male that came “straight to the kill” and scattered all others while positioning himself near the hindquarters, ready to enjoy the best cuts!

We only left the scene at nightfall as -luckily- we knew the area well. The lions -mainly the younger- were still feeding while most of the adults were now doing nothing but washing themselves and then resting belly-up. We heard the jackals and the hyenas starting to call and soon they were approaching to the carcass that, by now, was more than half eaten. Thinking on seeing how it would be the following morning, we memorized a few features to be able to come back to the area that happened to be outside the reserve.

The following morning, we arrived to the spot but had difficulties to find the kill. Only after a careful search we stumbled upon the zebra’s clean skull and a couple of bones. That was all that remained from what yesterday had been a living zebra! Luckily, about 500,000 migrated every year intermingled with the wildebeest so one less was not going to make too much of a difference!

[1] In Africa, a narrow steep-sided ravine formed by water erosion but usually dry except in the rainy season.