After our accidented Chipinda Pools stay, we got to Mabalauta in mid afternoon. By that time we were already famous, expected and treated like VIPs (or silly old folk?)! 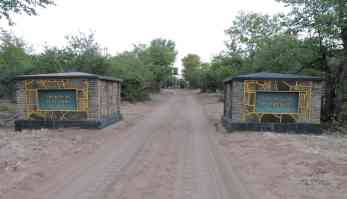 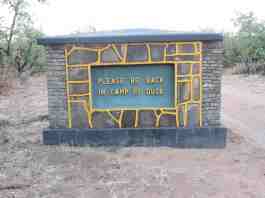 A booking was indeed ready for us at the reception but, on arrival to the Swimuwini camp itself we noted that our favourite bungalow was available. Negotiations follow as it was more expensive and finally, through an additional payment, we secured it.

Not only the bungalow was comfortable but it was beautiful. It had a great view of the vast expanse of the Mwenezi River below and it also had its own “resident” baobab next to its entrance. 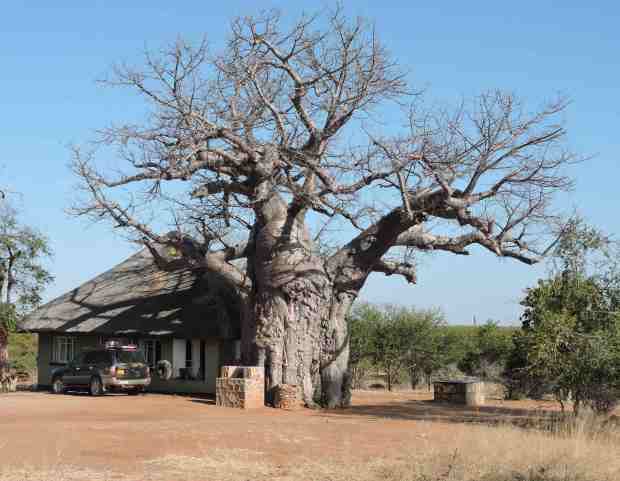 Our bungalow by the river and the views from it, below. 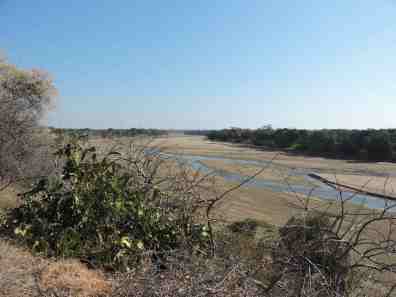 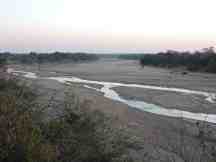 The Mwenezi river at dusk from the “contemplation” chair. 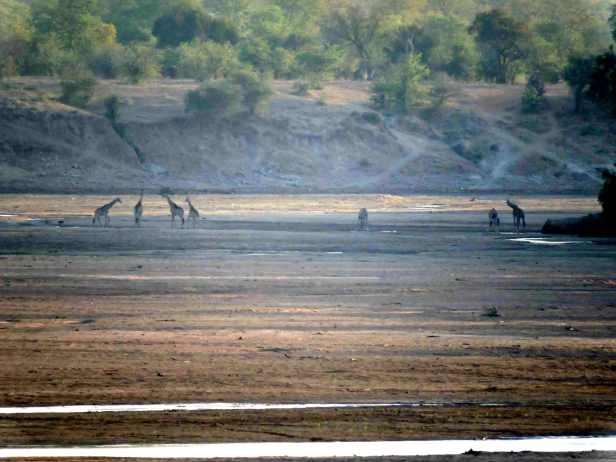 Giraffes in the distance.

It even had the added and valuable bonus of a bush cellular phone signal! We have learnt that cellphone signals are often found at weird places such as under the third marula tree facing the river or by placing your phone inside a cut out shampoo container hanging on the pole holding the entrance gate of a camp! In this case, the signal was obtained in the center of the backrest of the middle veranda armchair and, capriciously, nowhere else! So we were connected.

Fungisai, the camp attendant we knew from the last time, was still there as helpful as usual. This time she sported a bigger smile and she was very happy with the new park management as they were getting things done fast and their salaries were now being paid in time. There was a busy atmosphere around camp with the garden being refurbished and the various bungalows re-built. A look at the ablution block’s brass fittings’ condition further testified to the staff willingness to get on with the work! 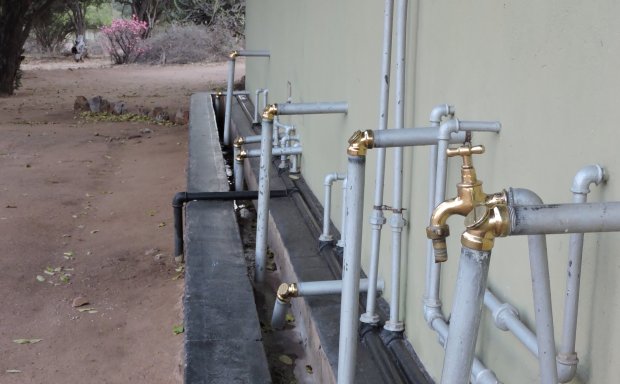 This time we had electricity and hot water at the ablutions block provided by a donkey boiler (also known as a Tanganyika boiler in East Africa) that worked great but that will soon be replaced by solar heaters. After enjoying its abundant hot water, we agreed with my wife that there are no better showers than these albeit their environmental friendship can be argued! 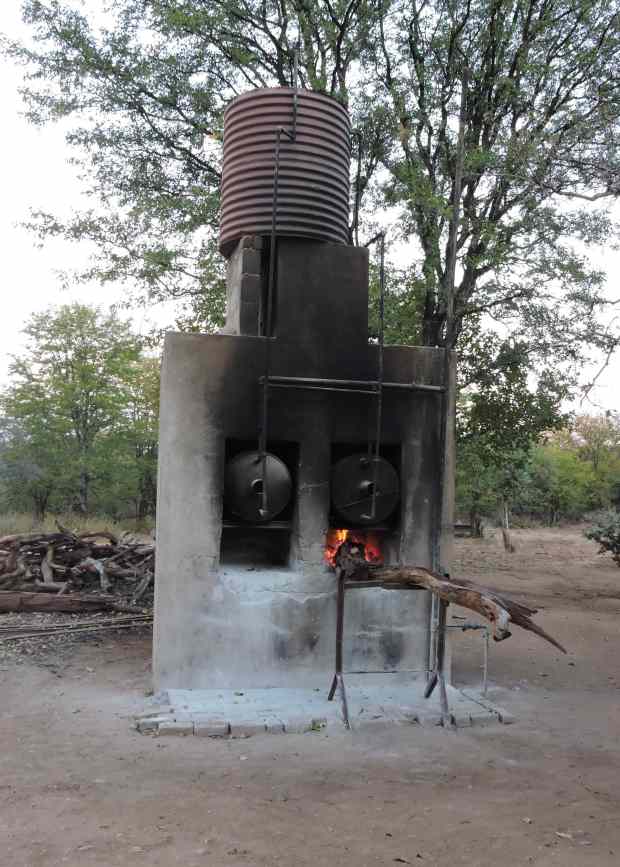 Swimuwini (Place of baobabs) is one of the nicest national park camps we have ever stayed. It is not only small and beautiful but not many people stay there. For the first two nights we were alone and only then one more family arrived the third night. I believe that this will soon change when the on-going refurbishing work gets completed.

We spent some time exploring the camp admiring its plant and animal life. There are four bungalows that come with their own baobabs and a super tree is located at the staff village. In addition, the camp is splashed with impala lilies (desert roses in East Africa) that come in all shapes and sizes and are incredibly beautiful.

Another special of Swimuwini is the herd of Nyala (Tragelaphus angasii) that daily walks through the camp grazing and browsing on their way to and from the Mwenezi river. We remembered a rather large male from our previous visit but now, apart from it, there are at least two more young males and about ten females and young. They are tolerant of humans so we could approach them on foot and take a few pictures before they disappeared in the thicket behind the camp. 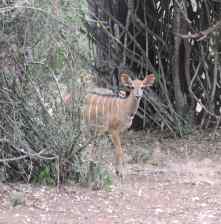 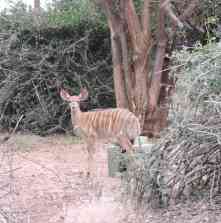 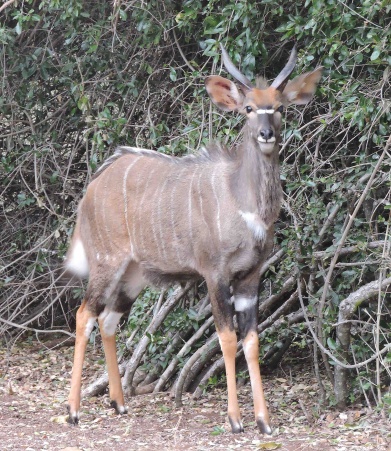 We drove many km carefully looking for game (we all know that my wife can spot anything that is there!). Impala were plentiful again but no Greater kudus were seen. A herd of about a dozen giraffe kept a prudent distance and they were seen mainly drinking in the distance down at the Mwenezi river (see above). This time we only heard jackals but did not see them but spotted three young hyenas walking around camp. 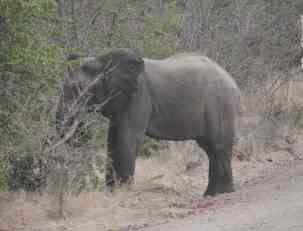 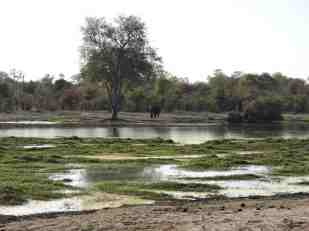 We saw a few elephant bottoms crushing through the brush and, eventually, caught a glimpse of two at the Nyamugwe pan. The sighting lasted for a minute perhaps and they were off! Clearly, despite the new management, it will still take time for the elephants to tolerate humans as it is clearly spelled at the sign that is found in Wright’s tower down the Mwenezi river, close to Malipati. 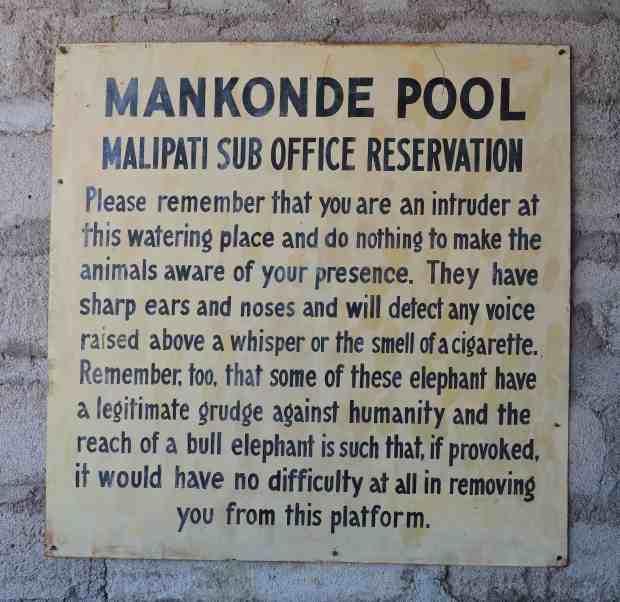 The camp offered further entertainment in the evening as the baobab crumples were the home of bats that would come out and hunt for insects under our veranda light. 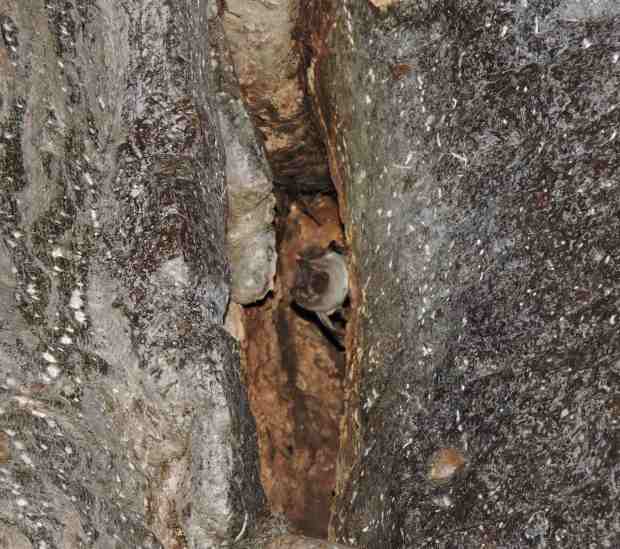 The first night the camera trap -a great new addition to our safari gear- pictured a genet looking for left overs around our bungalow. In the camera we saw that it had started visiting our place between 19:30 and 20:00 hours so we decided to wait for it during the second night. We were immediately rewarded with several visits and a few (bad) pictures! 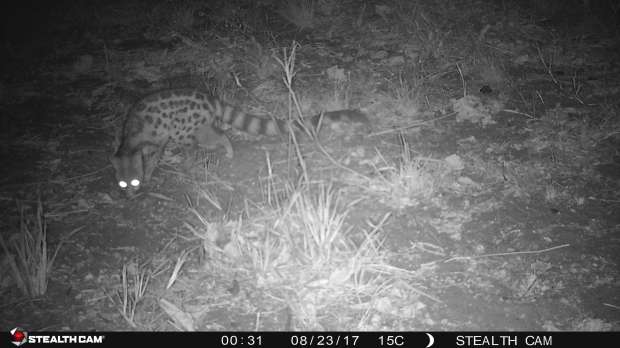 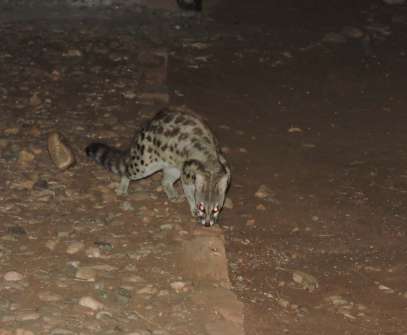 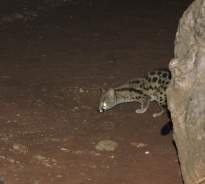 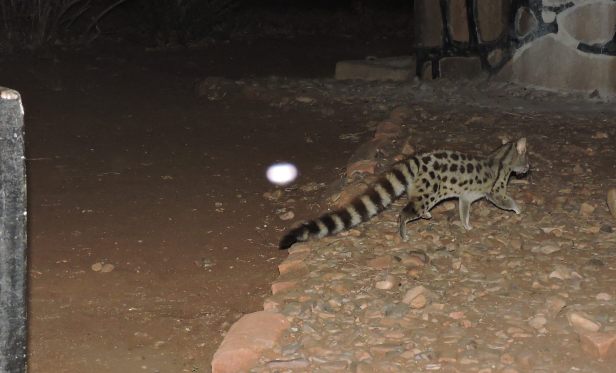 Albeit small, the Mabalauta section of Gonarezhou offers a nice drive along the river where a few river pools can be visited. Rossi pools offer a great view of the river where patience is rewarded with the arrival of different animals to the water. While you wait you will find entertainment counting the crocodiles either swimming or basking under the sun and, when the wind stops and the ripples settle, tilapia shoals can be easily seen moving about in the shallows while tiger fish patrol the deeper green pools in search of prey and the occasional terrapin surfaces to take a lungful. 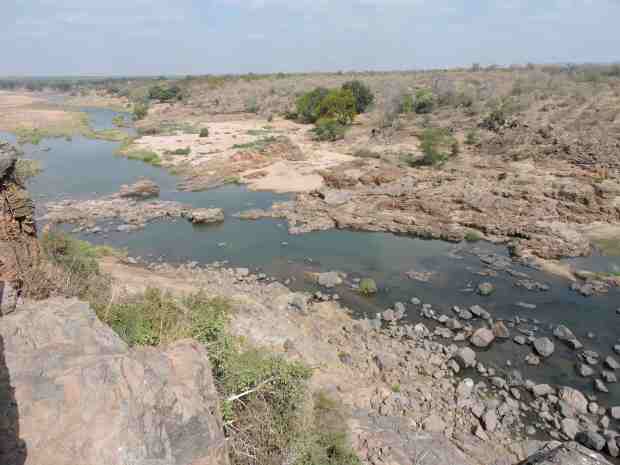 A couple of kilometres further down the river the rather ugly Wright’s tower offers another nice view of the river. Searching for the origins of the tower I learnt that Allan Wright was a District Commissioner that was largely responsible for the establishment of the Gonarezhou National Park in 1975 so he probably built the tower [1]. 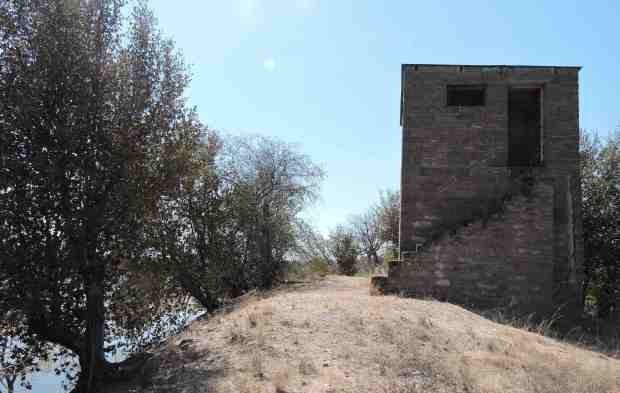 It was also in this general area that S.C. ‘Bvekenya’ Barnard, the notorious hunter and poacher roamed during the early 1900’s avoiding the police by moving to different countries around Crook’s corner the point where the borders of Mozambique, South Africa and Zimbabwe converge. Bvekenya’s errands have been immortalized by T.V. Bulpin in his book “The Ivory Trail”.

But that is a different story.

[1] Allan Wright described his time in Nuanetsi District in his books Valley of the Ironwoods. A Personal Record of Ten Years Served as District Commissioner in Rhodesia Largest Administrative Area, Nuanetsi, in the South-Eastern Lowveld (1972) and Grey Ghosts at Buffalo Bend (1976) both now out of print.