Although the hamerkop (Scopus umbretta) is the sole member of the genus, it is now believed that it has genetic similarities that are closer to the pelicans and shoebill stork than other water birds.

We find these true Cinderella of the swamps extremely interesting despite being rather common and overshadowed by the most colourful species. Perhaps their better known feature is their huge nests that take them 2 to 4 months to complete and that are often used by other birds as well.

I have mentioned that these birds frequently visit our former pool (now a water reservoir) in Harare and spending long hours stalking the African clawed frogs [1]. I was intrigued by how the frogs were caught as I always heard a splash but, by the time I looked, the frog had already been caught.

A couple of years ago, while camping at Shumba in Hwange National Park [2] I had the chance of seeing a hamerkop hovering over the dam there but it was evening and I could not watch it long enough to find out whether it was fishing or on some other kind of display so the mystery continued.

Luckily, during our visit to the Kruger National Park early in October we were stationed at a water pond waiting for large game to come to drink and, during the time, we were entertained by a couple of hamerkop that were feeding and we could watch them at leisure and resolve the issue.

Each bird repeated a routine that involved landing on shore and, after a time that went from a few seconds to a couple of minutes of walking about, take off and fly very slowly over the water with dangling feet and slow wing beats that would keep it just above it. During the hovering its feet sometimes touched the water and it occasionally would drag them on the water surface.

While we were there the bird was performing this routine constantly and our comment was that it must be effective for the bird to spend all this flying energy on this, apparently, futile activity. The answer to our questions came after about an hour when the bird suddenly landed in the water with feet and beak and emerged victorious with a frog! 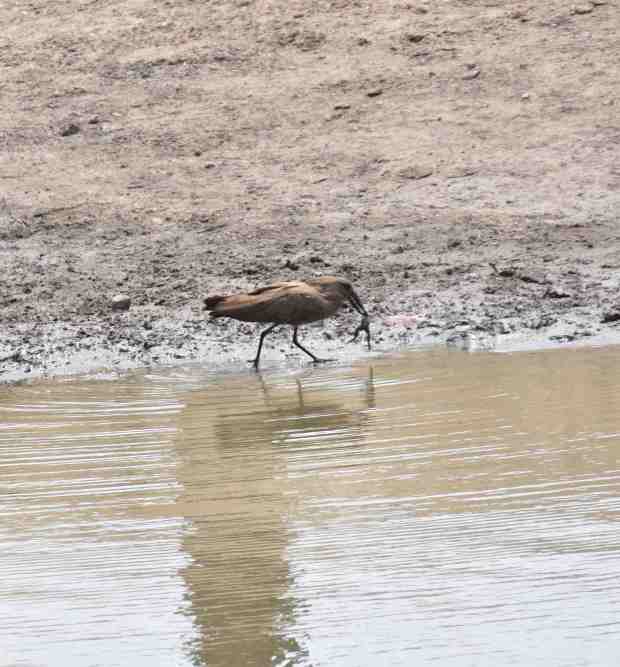 It then took off from the water and proceeded to eat it. Unluckily, after its success the bird landed on the opposite shore of the dam so I could not even guess at the identity of the frog and only managed poor pictures.