Tiger fishing is one of the top sports in Southern and Central Africa and Zimbabwe is no exception. We had fished for tiger several times before not only in Zimbabwe but also in Lake Turkana and Tanganyika. Luckily I had caught a few good specimens that we always returned to the water. But, if size matters to you and you wish to display your catch, there is no need to kill your fish as fibre glass models exist that would fit your fish if you take a couple of quick measurements in addition to its weight!

Apart from tiger fishing, many people visit Kariba in search of bream (Tilapia spp.) but relatively few are after vundu (Heterobranchus longifilis). Excluding bull sharks, the vundu is the largest freshwater fish in southern Africa, reaching up to 1.5m in length and 55 kg in weight, quite a large fish for my coarse fishing standards! Interestingly, vundu only live below the Victoria Falls as none have been caught above the falls [1].

My wife’s dentist is one of the few fishermen I have heard of that “specializes” in vundu fishing and the re-telling of the fishing prowess of the dentist (30 to 40kg vundu caught!) had an influence on me when deciding this trip.

So, aware of the family’s love for nature, our daughter’s keenness for the sea, our son’s need for resting as well as my desire to fish for vundu, in mid 2017 we booked a trip in Lake Kariba. Unfortunately our son was not able to join us because of work and a couple of invited friends also declined our offer because of pressing domestic commitments. When it looked that we would be just three on a now rather outsized houseboat, Clara, a friend of Flori (our daughter and part-time Ed.) decided to join us all the way from cold Stockholm, her first trip to Africa, almost straight to the bush (and, after the experience, perhaps the last?).

Our final destination was the Ume river, quite far from Kariba town, the place where houseboats leave from. We were told that to reach those far off places you required a minimum of six nights in the lake. After a long search comparing prices and comfort we had booked a rather spacious houseboat known as O B Joyful. We agreed on a self-catering basis so it was our responsibility to organize all food and drinks to last for the week as well as all needed items regarding fishing. 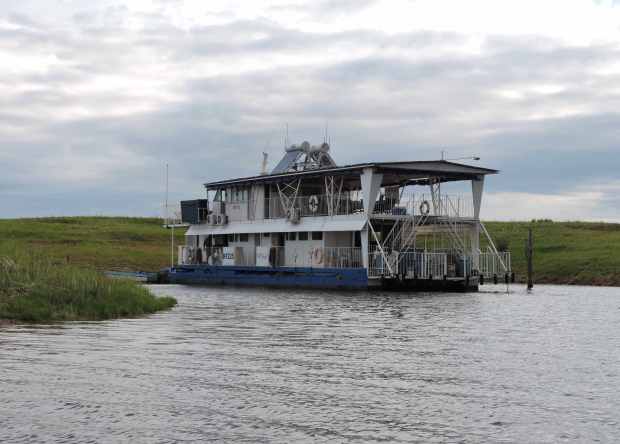 With a crew of four (Godfrey, the Captain, Warren the cook, Pilot the sub-Captain and Silas, the handyman) we sailed from 2 to 8 of January. They were really first class and pampered us thoroughly. 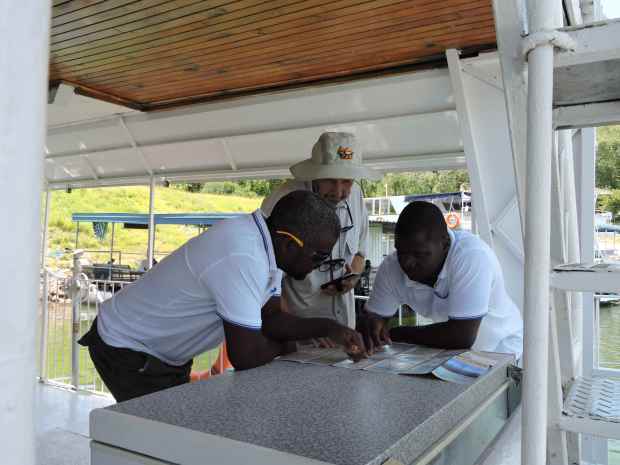 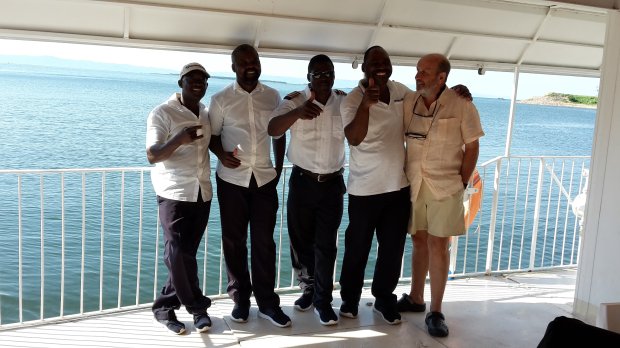 From left to right: Silas, Pilot, Godfrey, Warren and the Bushsnob.

Although we had visited Kariba several times before, it is easy to forget its size and the incredible beauty of its blue water, green islands and grassy flood plains framed by the spectacular and distant hills, a hazy blue in the distance. The abundant birdlife, numerous hippos -both in and out of the water- and the usual elephants complete the general picture. Abundant fish eagles were a constant sight and their wild calls are missed now! In addition, we also watched a couple of fishing ospreys. 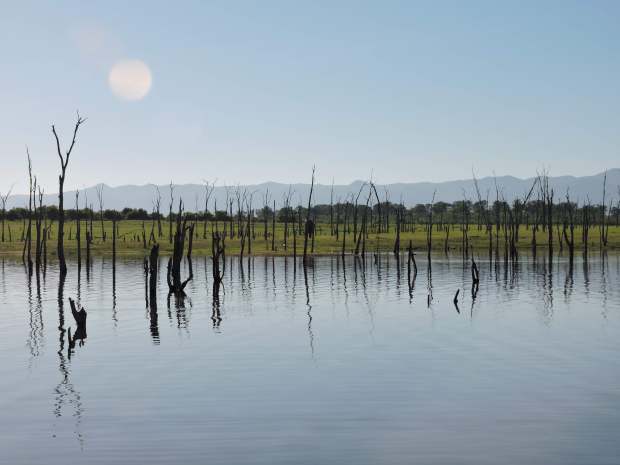 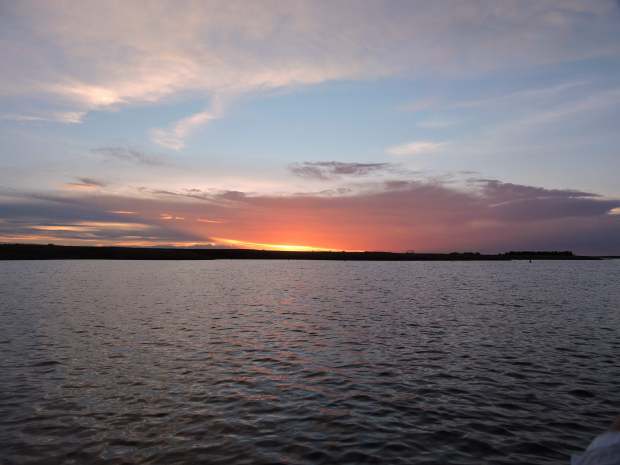 At night you are immersed in a different world with a star-full sky where with patience you can detect a number of known constellations while listening to the noises of the night, particularly owls, frogs and toads with the occasional lion call and hyena whooping [2]. 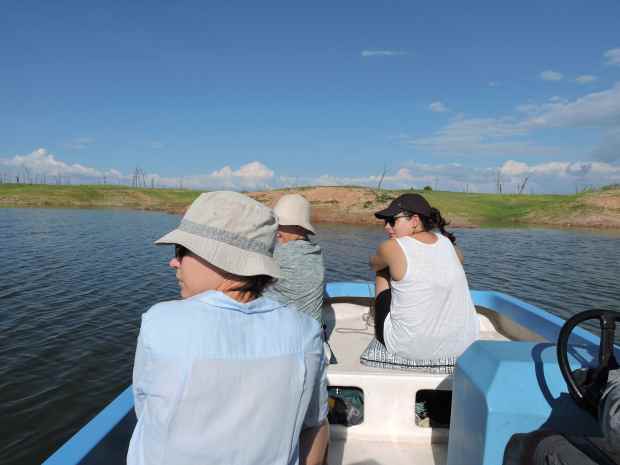 Luckily Godfrey was keen on fishing and helped us all the way, not only getting us to potentially good vundu spots but also on the bream fishing as well. His patience with worms and fish netting was really remarkable! Luckily, fishing bream became a great entertainment for the whole group while waiting for the vundu to strike and we also had some frequent visitors to keep us busy… 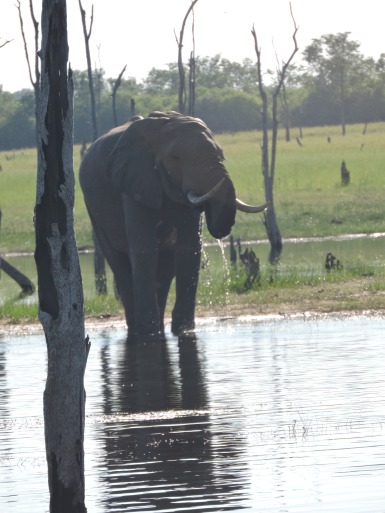 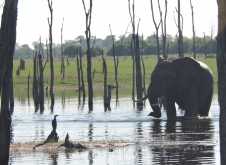 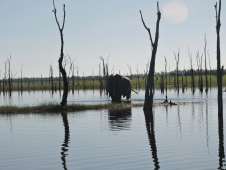 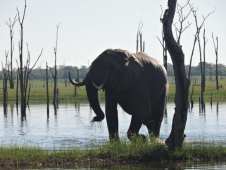 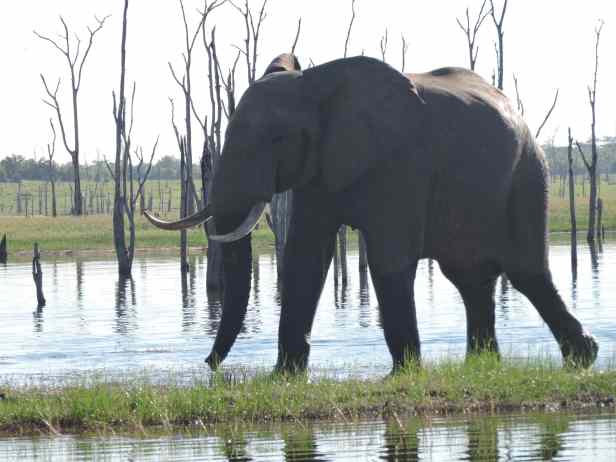 The elephant walked past us every morning to and from its sleeping place! 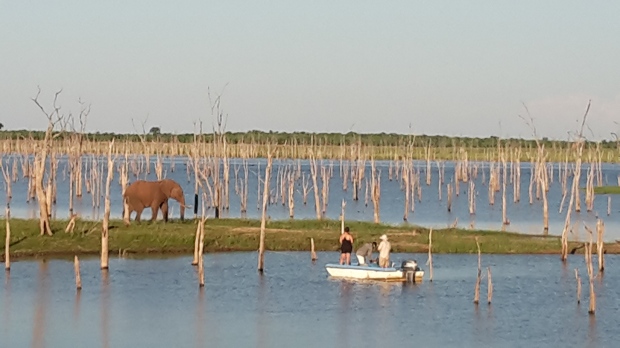 The surprises of fishing in Kariba! 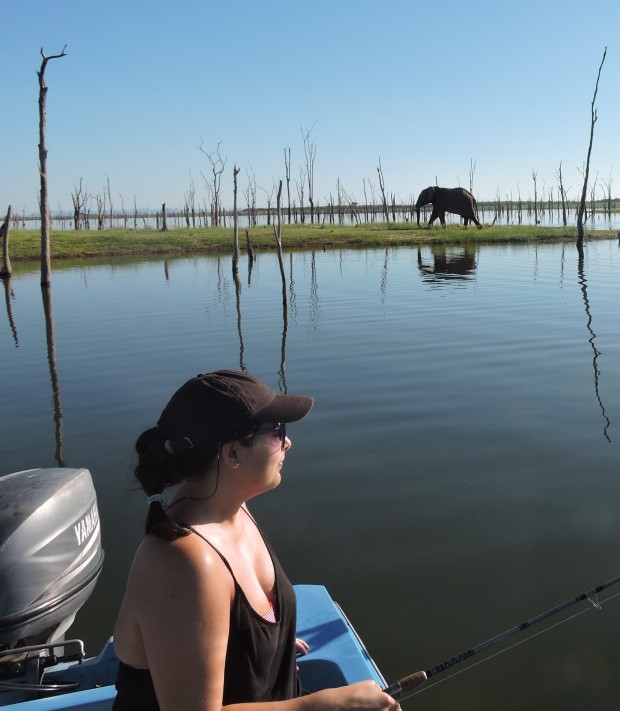 Although we knew that the Ume river was as far as we would go, the rest of the itinerary was open as we decided that we could chose where to spend our time. In addition, there was a factor we did not plan for: the weather! Storms are feared in Kariba and the fact that it was the rainy season added some uncertainty to our planned itinerary. Luckily, although the first two nights were stormy, the weather cleared and we were able to move at will. 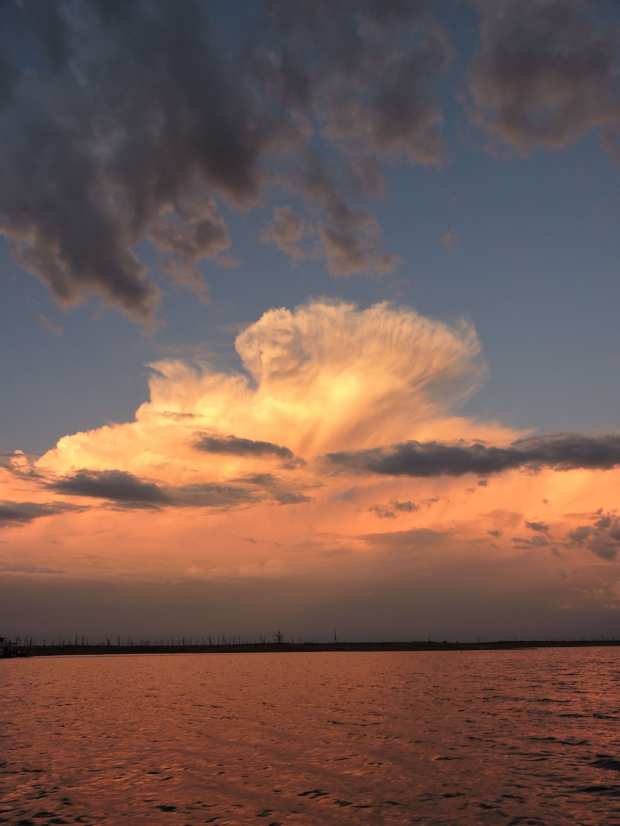 Storm looming. Luckily it did not come our way.

Briefly and for reference, our first night was spent at Changachirere and fishing only produced a few bream. The place was clearly used to spend the first night at the lake by most houseboats so we were about eight boats. Luckily there was still ample space to moor. Following Godfrey’s advice the following morning we sailed towards Elephant point, five hours away. It was a good decision as clouds were gathering but we got there in good time and anchored at a safe spot. The boat was secured not only by tying it to some of the dead trees but also to some sizeable iron spikes that were laboriously hammered into the stony ground for about one metre! 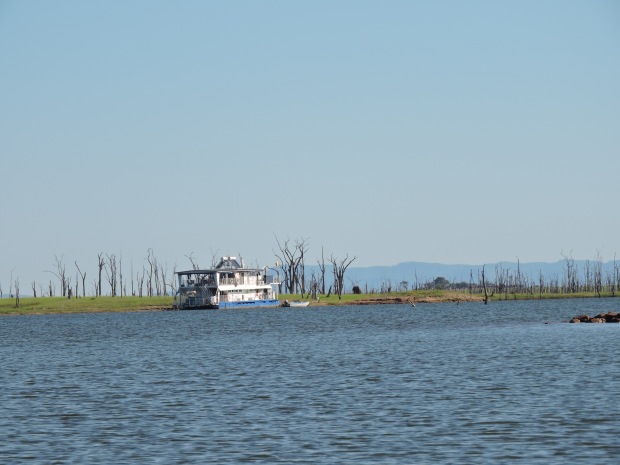 The houseboat moored at Elephant point.

Safely tied we organized ourselves for the next morning fishing. While Godfrey went to bait an area with the aid of a cattle-licking block (a new gadget for me!), we watched the hippos grazing out of the water and the elephants in the distance.

The next morning we were up early and headed for our baited spot but, well before arrival, we noticed that a rather large boat was fishing at our spot as they had also baited it and had arrived there earlier than us. Crestfallen, we moved off to another spot near our houseboat where there was no baiting but it was a deep channel that offered good possibilities. Godfrey was correct.

As soon as I finished casting my “vundu rods”, I hooked a tiger fish that I managed to land after a few nice jumps and a good fight. It was not large but fun and, as soon as I casted again, another one took the bait and it was also landed, luckily.

Too much -unprecedented- success prompted me to share my luck with Flori as she is a very keen fisherwoman. It only took a few minutes until one of the reels started buzzing and she landed a nice African Sharptooth catfish (Clarias gariepinus).

Things did not end there! As soon as she re-casted, the run that followed was “serious” and we all knew that she was into a good fish. After about ten minutes of reeling in, runs and more reeling in, she finally landed a nice vundu, the first one the family ever caught! As we had forgotten the fish scale, we estimated it to weigh about 12kg or more! 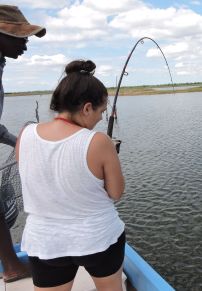 Flori sweating it out with the vundu. Godfrey looks on. 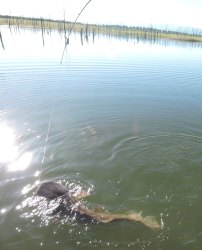 A vundu close to the boat. 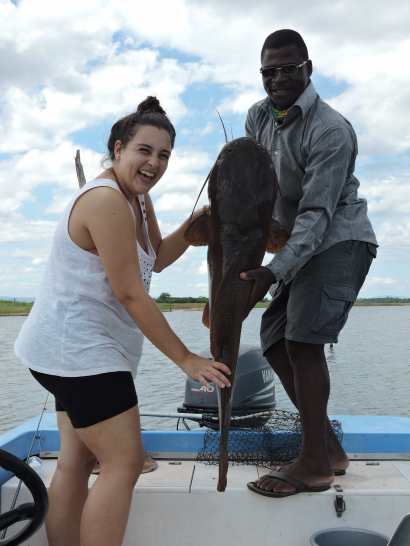 We were thrilled but we were also aware of the time and we needed to stop fishing to be able to sail our way to the Ume river.

Although we were quite close from the Ume, because of its size, our boat needed deep water. This meant that we needed to get back out on the main lake, turn and then enter the mouth of the Ume. Unfortunately, the weather was cloudy and windy so we had a wavy lake. It all went reasonably well going out but, the turning was tricky and we had a few serious shake-ups before we changed direction towards the Ume where we arrived five hours later.

We entered the Ume until we found a good bay where we could moor. The area was no longer open floodplains but hilly with bush and forest that would reach almost to the shore of the lake making game-spotting very difficult. Fishing was also a futile exercise and we unanimously decided that the next day we would spend it back at Elephant Point where not only our fishing had been good but we could also enjoy the landscape and its dwellers.

The following morning we left early and, with better weather now, we got to Elephant point faster and moored near the spot we had been before. Next morning we were fishing again and this time we had some party members going for bream “for the pot” while I was still attempting to catch the elusive vundu. Luckily, after about an hour of watching my companions pulling bream in I had the first strike and, after some work, brought in a vundu that weighed 9kg as this time we had the scale with us. I was moderately impressed…

Fortunately, an hour later I had another run and hooked another fish that gave me a lot of work to bring close to the boat. Eventually I managed to bring it and, while still in the water, we could see that it was a nice size. Suddenly I saw another fish coming towards it and I thought it was its friend! “That is interesting” I thought but Godfrey brought me down to reality when he identified as a crocodile having a look at “my” fish! 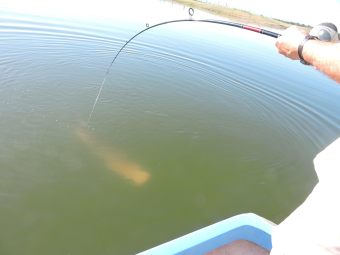 After the croc had a look! 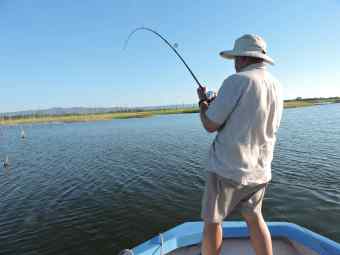 The Bushsnob getting a fish. 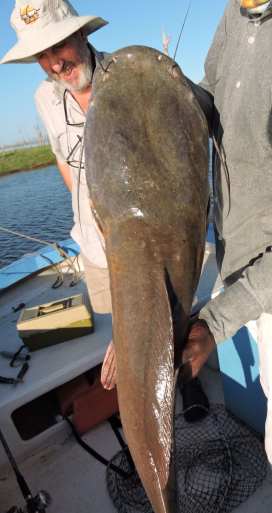 The second vundu held by Godfrey. 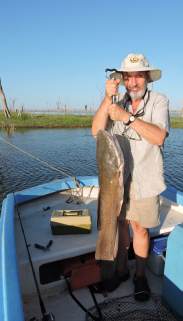 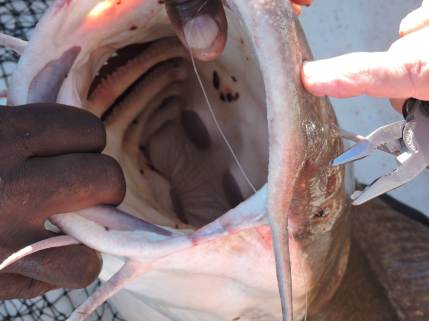 Luckily, the croc -smaller than the fish- only came up and then it was gone without damaging the fish and I could recover it whole! The vundu “busted” our balance that would only go to 25 lbs so I assume it to have been about 15kg and I was much more pleased with the achievement this time. Still, it was a far cry from the dentist’s 40kg ones!

All in all, my vundu “thirst” was by now somehow satiated and it was better that way as those were the only two that decided to offer themselves to my rods during the days remaining! I did have a few more bites and runs but missed whatever these were.

Although we did not get more vundu, we still had great fun catching bream and watching birds and mammals all the time. In addition, life on the boat was extremely pleasant and we had a good rest (those who needed) as well as lots of entertainment. Time passed really fast and we needed to return back to Kariba.

It was a great trip that left me still wanting as I realized not only the beauty of the area but also that there are still plenty of vundu lurking in Kariba’s depths and we are already thinking on ways to get them the next time.

[2] We found the iPad app SkyView Lite a useful aid to identify the various celestial objects.