All the Kenya lakes have their own unique characteristics and attractions. To pick one as “the best” is impossible, at least for me. However, lake Bogoria was one of our all time favourites when it came to a short break. You did not go there to find the Big Five but in search of tranquility and to enjoy the views and bird fauna. It was here that I spotted my first and only three-banded courser (Rhinoptilus cinctus). 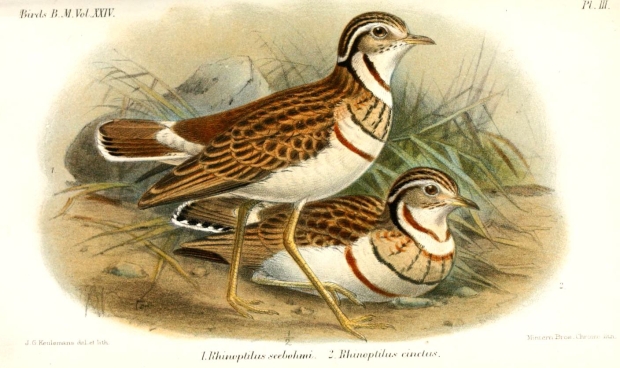 It was also a special place for another reason. It was my first camping experience in Kenya. It happened over a weekend with Muguga House colleagues Richard and Phillip. Of the outing I recall that we departed on a Saturday to return the following day. We left rather late as Richard had lots of work to do to keep the tsetse parasitoids in his lab going. A late departure meant that we could not enter the park that day and needed to camp outside the gate.

As I had no tent and only a borrowed camp bed, I slept “al fresco” as it was -I was told- a very arid and dry area. I still recall the thousand of honking flamingoes flying overhead throughout the late afternoon and well into the night.

Luckily I woke up with the first raindrops and before getting soaked -together with my bedding- I managed to enter Richard’s car. After a while I realized that it was going to be a tough night. The location of the hand brake made sleeping across the front seats of a packed Toyota Corolla impossible.

I slept in a seated position and the following day I was very tired and with a few aches. Despite my condition, the few hours we spent there were enough to appreciate the beauty of the place and to remember to come back.

Lake Bogoria is a volcanic lake framed by green-blue hills. Its waters are greenish saline (up to 100 g/L total dissolved salts) and alkaline (pH:10.5). It lies in the Kenyan portion of the Rift Valley, south of Lake Baringo and a little south of the equator. It is a rather shallow body of water that is no deeper than 10m of depth. This rather small lake of 34km long by 3.5km wide has been protected since 1973. 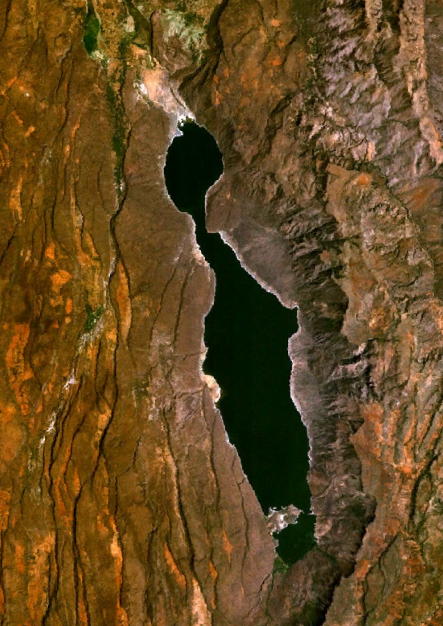 Lake Bogoria’s beauty is already evident at first sight! After climbing one of the several red hills you need to negotiate to get there through the Emsos gate a misty dark green body of water framed by pink startles you at first until you realize that the pink borders are tens of thousands oflesser flamingoes (Phoenicoparrus minor) with a smaller number of greater ones (Phoenicopterus roseus).

The first view of Lake Bogoria.

While greater flamingoes feed on invertebrates, mollusks and tiny fish, l and insect lesser flamingoes feed primarily on Spirulina algae which grow only in very alkaline lakes. Although blue-green in colour, the algae contain the photosynthetic pigments that give the birds their pink colour. Their deep bill is specialized for filtering tiny food items.

A view from the eastern shore.

These birds were part of the largest world population of flamingoes that migrated among several of the Rift Valley lakes such as Natron, Magadi, Nakuru, Elmenteita and Bogoria. For some reason, the latter is one of their preferred stopping places. At the time the flamingoes seemed to commute mainly between Bogoria and Nakuru although their breeding took place mainly on the caustic lake Natron in northern Tanzania. 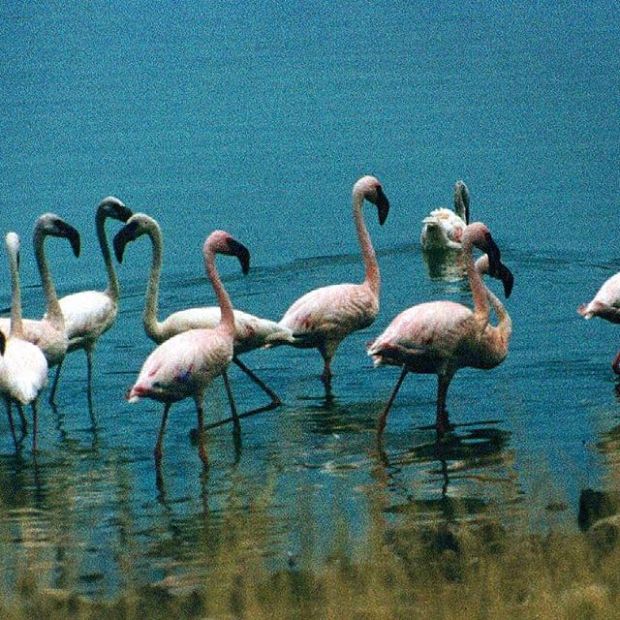 A few months after my first safari and following my wife’s arrival lake Bogoria was one of the first places we visited once we got our VW kombi and some camping gear. At first we camped at the Acacia campsite on the southwest shore but soon we realized that either camping at the Loburu hotsprings on the western shore or at the Fig tree campsite in the southeast were nicer alternatives. 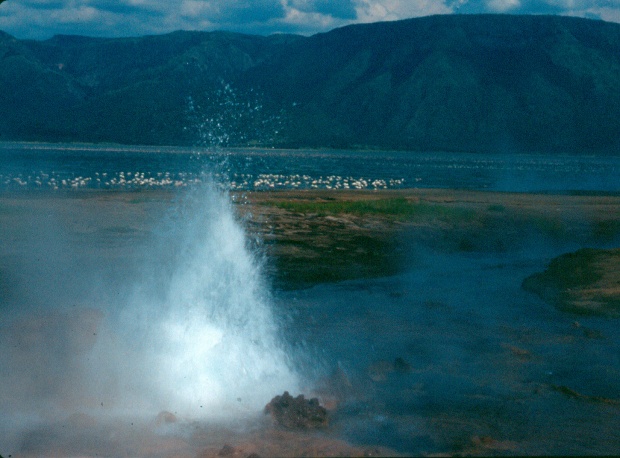 Loburu hotsprings with immature lesser flamingoes in the background.

The southern end of the lake is almost separate from the remaining body of water towards the north but for a small channel in the eastern section. It is in this area that large numbers of flamingoes were often spotted. It was a photographer’s paradise and I still remember a friend’s great idea of taking pictures of the birds in full moon only to arrive at the lake when there was a full eclipse!

Although staying near the Loburu hot springs added a few extra degrees l to an already high temperature, the various steam jets and hot water rivulets around camp contributed to make it an interesting and misty place. Although walking among the hot springs was hazardous, it was quite an experience and its water greatly facilitated the needed camping dish washing!

The springs are quite powerful and they create short streams that feed the lake and some had formed cones while others gave raise to small pools, some over two metres deep and very hot as the temperature of the springs varies between 39 and 98.5 °C . Unfortunately, instances of severe burning of campers falling in had occurred by the time we got there!

Our favourite camping ground was the Fig tree camp, a very shady area under a patch of magnificent fig trees that provided the necessary thick shade. The camp was traversed by a clear stream coming down from the Siracho escarpment just above the area. We sometimes drank from it in cases of need as a good friend assured us that it was clean water. It did taste great but a few years later we were in for a surprise: we discovered that higher up in the hills it went through a local village!

We spent many cool nights under the trees but there was one exception that, apart from cool it was “entertaining”. Unknown to us the rather large resident baboon troop had decided to spend the night up the fig trees above us! This had probably happened during earlier stays and it had gone unnoticed. The night in question, at about midnight, all hell broke loose as something seriously scared the baboons, possibly a leopard although we never saw it. We only suffered the consequences.

It seemed that the entire troop was above us! Their fright caused a number of them to violently empty their bowels and bladders. I leave the results of this barrage to your imagination! I will only tell you that the aftermath was a smelly night and lots of washing of our camp, including the car windscreen the following morning! There must have been lots of baboons! After that experience we learnt to sacrifice some shade to avoid a repeat of this situation!

During the earlier visits to lake Bogoria it was still possible to drive all around the lake and we did this a couple of times before the road collapsed. The most memorable of these round the lake tours took place with our friends from Uruguay Nazar and Aurora when we drove north from the Fig tree camp and we could slide the kombi door open to really enjoy the view. The drive was special as it offered great views of greater kudus that used to dwell on the eastern area of the lake where they could browse to their liking.

Going round the lake would also enable you to see many of the more hidden hot springs as well as the some of the special features such as the Kesubo Swamp to the north. However, the geysers and hot springs along the bank of the lake were, apart from the flamingoes, the most interesting features.

Kesubo Swamp to the north of the lake.

Unfortunately in recent years the population in the two key east African lakes, Nakuru and Bogoria, have been adversely affected by suspected heavy metal poisoning, while its primary African breeding area in Lake Natron is currently under threat by a proposed soda ash plant. So, despite still being the most numerous species of flamingo, lesser flamingoes are classified as near threatened due to its declining population and the low number of breeding sites, some of which are threatened by human activities.

Finally, after a few weeks I managed to finish a new post on Zambia. I hope you enjoy it. Bushsnob