The rotten egg smell of the ostrich egg post [1] brought back memories of lake Magadi and its malodourous beauty.

After a few months in Kenya we got to know a few people interested in nature and we connected with them immediately. Most were working around Nairobi (Kenya Agriculture Research Institute, Muguga and the International Laboratory for Research in Animal Diseases, Kabete). We were all agriculture or livestock specialists that shared an interest in nature.

A sunny Sunday we were invited to a day trip to lake Magadi. We knew nothing about the place so, after some enquiries, we learnt that it would be a picnic at the lake and that bird watching would be high in the agenda. We had not done any bird watching as such in our lives so we lacked binoculars, bird books, etc. but we accepted so we could start learning new ways.

At the time we did not know it but, after this first expedition, we visited the lake frequently. It was an ideal one-day outing from Nairobi in view of the relative short distance from Nairobi(106km), the picturesque nature of the journey and the wildlife that could be seen both en route and at the lake itself.

Lake Magadi, nested at 580m of altitude is close to Lake Natron in Tanzania and it is located in a volcanic rock fracture in the Rift Valley, itself a gigantic fault that runs for about 6,000km from Lebanon in the North to Mozambique in the South.

We left Nairobi early following the lake road that skirted the Ngong hills, a true landmark where Karen Blixen’s farm was located (now her homestead is a museum). The moment you had the Ngong hills on your right, the immensity of the Rift Valley opened up in front of you. A rugged succession of hazy mountains gradually took your eyes to the bottom of the valley and, on a clear day, the amazing view of Kilimanjaro with its snow in the equator will frame the postcard vista.

The spectacular view of the Rift Valley from the Ngong hills.

From there you started a descent that traversed Maasai country while getting increasingly dry and hot. Manyattas peppered the area and encounters with Maasai going or coming from watering points with their cattle were a common occurrence. I recall our friend Paul -later on- saying that the road would made an ideal cycling trip because of its downhill trajectory towards the lake. 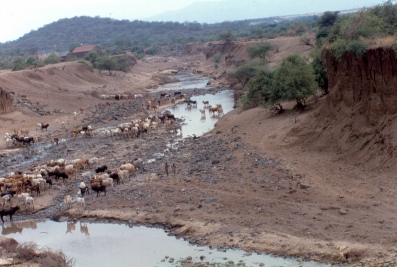 Maasai and their cattle, frequently found on the Magadi road.

A few km before arriving to the lake, Tony, one of our friends, stopped the car for a bit of exploring. Apparently, during an early visit, they had “discovered” some fossilized elephant remains that he wished to show us. Some of us followed him looking for the bones while others spotted some interesting bird and immediately forgot everything else and focused on the feathered creatures. This was my introduction to the rather focused birdwatchers ethnic group! 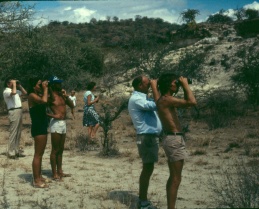 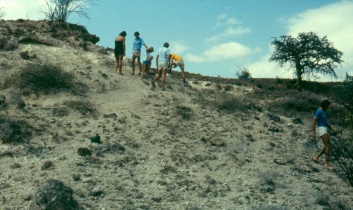 While some of us looked for the elephant bones, the bird-watching crowd looked at… birds.

We did found the elephant bones. I thought they were rather disappointing but kept the opinion to myself! The stop was good to drink lots of water as the temperature was now well above 30oC and we were still quite a distance from the bottom of the valley and it was not yet lunchtime. Although some of our co-travellers had iced cold water (freezing the jerry cans prior to the journey) we drank ours at ambient temperature (no coolbox yet in that trip!). This became our normal water temperature while on safari, as it would give us independence from fridges and ice.

We continued our trip and, suddenly and surprisingly, we viewed a large flat pink expanse below us. We were looking at the lake and, as it was the dry season, it was almost totally covered in white and pink soda. 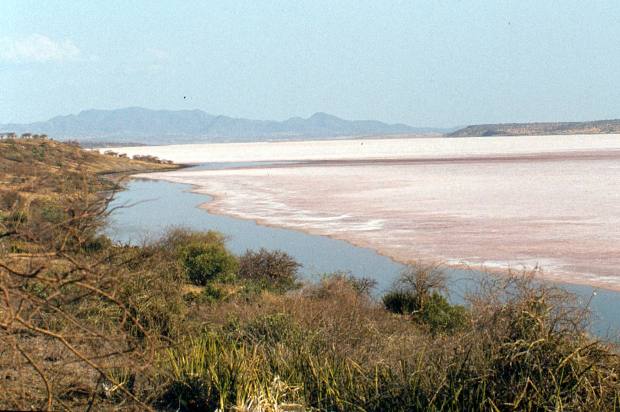 Subsequent visits during wetter times showed a much “lake-like” lake, despite the scarcity of its yearly rains, an average of 470 mm per year [2]. During this time, a thin (less than 1m) layer of brine covers much of the saline pan, but this evaporates rapidly leaving a vast expanse of white and pink salt that cracks to produce large polygons. 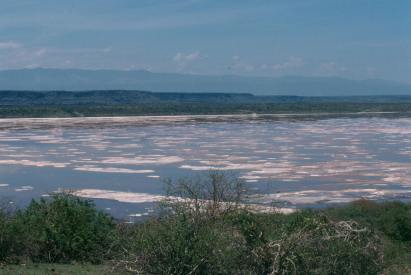 The lake after the rains.

The crusts after the rains.

Another view of the crusts and their amazing colour

We came to the entrance gate already hot and smelling the strong sulfur gases that emanated from the lake and that would be a constant whenever we visited it. The gate was in fact the entrance to the Magadi Soda Company where we registered our arrival. Further on we also re-registered our intended route at the Magadi Police station, a mandatory requirement in case you got lost (we have to pass by again on the way out for our names to be stricken off the register so that a search party was not sent for us).

The lake is saline and alcaline and covers around 100 km2 being in reality a pan. The water precipitates vast quantities of trona (soda ash, also known as sodium carbonate) to a depth of up to 40m. From these large deposits the soda ash is extracted and used mainly in glass-making, chemicals, paper, detergents, and textiles. The Magadi Soda Company (now part of the Tata company) was created in 1911 to exploit this wealth.

Luckily for the company, the trona deposits are recharged mainly by saline hot springs that reach temperatures of up to 86 °C and their exploitation -at least during the early days- did not have a significant impact on these deposits. During our times in Kenya the soda ash was being carried by railway to Kilindini harbour in the Indian Ocean from where it would get exported.

Only once we found a train leaving the Malawi Soda facility.

The plan of our first trip was to do the “trip around the lake” that started crossing the first causeway with open water and then follow the road until we entered some bush cross-country driving to rejoin the road and return to Magadi town again.

A basic map of Lake Magadi showing in blue the trip around the lake.

It was during this part of the journey that we came up to our firs giraffe carcass, blocking the way. Its cause of death unknown but already as dried as biltong! 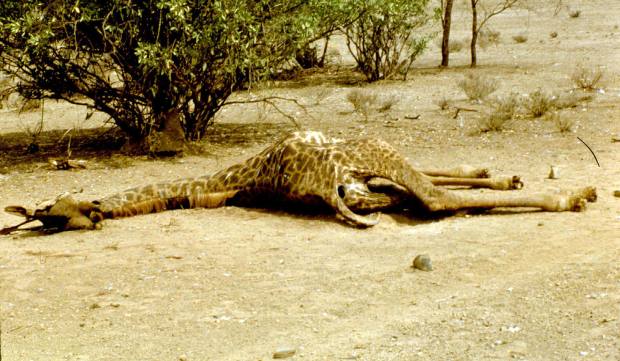 Lake Magadi hosts a great variety of water birds, including flamingoes, yellow-billed storks, different egrets and herons as well as smaller ones, including the interesting avocets. See [3] for some of the birds that can be found there. I do not recall whether we saw the Chesnut-banded Sandplover or Magadi Plover (Charadrius pallidus venustus), restricted to almost only lakes Natron and Magadi but our friends probably did. If not very spectacular, it was a rather unique little bird that we spotted in subsequent visits.

A pair of Yellow-billed storks fishing in lake Magadi.

Apart from birds the lake and surrounding area is also home to Wildebeests, Somali Ostriches, Beisa Oryx, Zebra, Grant’s gazelles, Gerenuks and of course Giraffes among other species of herbivores and browsers. But these are not the only interesting animals that inhabit the rather inhospitable lake Magadi!

In its hot springs some special fish find their living despite the high temperature and salinity of the water! Alcolapia grahami a species of the Cichlidae family has adapted to live in this rather harsh environment. It is not the only case as another three species inhabit Lake Natron a few km to the south in Tanzania: Alcolapia alcalica; A. latilabris; and A. ndalalani. Of interest is that there is no overlapping among the species present in each lake.

Walking in the hotsprings.

The now vulnerable A. grahami, most commonly seen in the southern shoreline hot spring pools where the water temperature is less than 45°C, have developed the ability of excreting urea instead of the usual ammonia of the teleost fish as they are not able to diffuse ammonium into such an alkaline media. As they feed on cyanobacteria of high N2 content, this is -apparently- important. They also have the greatest metabolic performance ever recorded in a fish, in the basal range of a small mammal of comparable size [4]. They are also an important indicator organism for global warming.

Coming back to our trip, after our stop for Police registration, we moved on and passed by the company’s brown golf course. It was interesting to see golfers moving about on a brown and grassless course where the holes were places with “browns” and a few dust devils thrown in as well! Since its establishment in 1931 this unique 9-hole course where you drive over donkeys and cows. It does not charge fees and it is open year round!

Maasai boys driving their sheep and goats through one of the lake’s causeways.

It soon became clear that day that lake Magadi is one of the hottest and least hospitable places on earth. The water is undrinkable for humans and animals quench their thirst at selected areas where salt contents are low. We soon run out of water but, luckily, we found a water trough for cattle use on our way back from where we replenish our water and had a badly needed and refreshing wash! 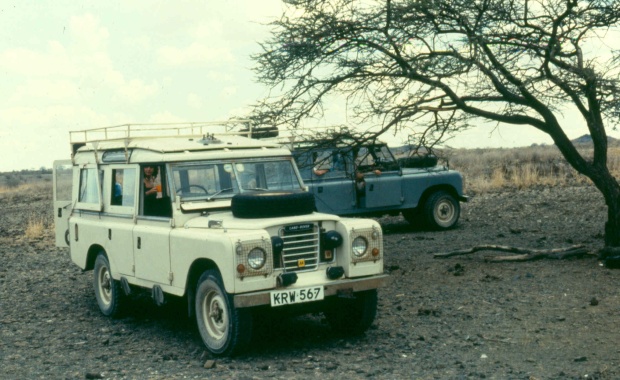 Stopping for the water trough.

While on the issue of water, years later, while having a picnic under one of the few acacia trees present around the lake, a Maasai elder approached us quietly and asked for some water. Without hesitation, one of our friends gave him a glass that the old man guzzled. Surprising all of us the man spat the water and started to jump while trying to hold his teeth, and shouting what we could understand as “baridi, baridi, baridi sana [5]!”

Without thinking, our friend had given him a glass of water from the frozen water can and the poor man, clearly used to drink water 40 degrees warmer, could not take it! After a few seconds he burst out laughing at the event while water at ambient temperature was supplied to him. This time he enjoyed it and he stayed with us for the rest of the picnic, sharing our food.

After our welcomed encounter with the cattle trough it was time to return to Nairobi. The heat had been intense and we felt really “desiccated” so it was with great relief that we took the road back that now climbed to the coolness of Nairobi where we arrived after night fall.

It was the introduction to one of our favourite weekend outings during the several years we spent in Kenya. 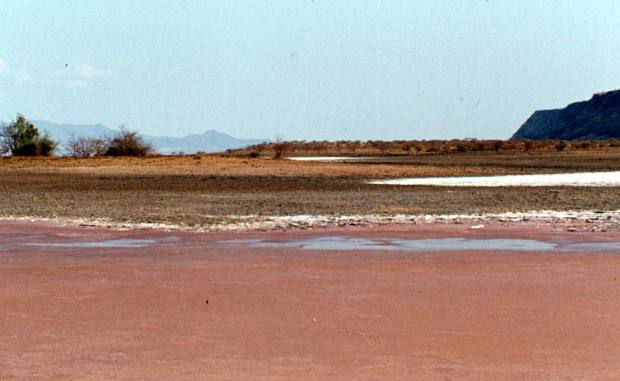