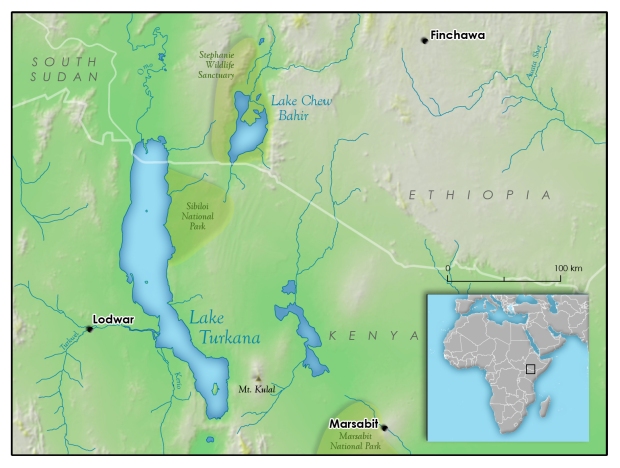 Not intimidated by the amount of stuff packed in and on the cars as well as on the trailer and full of enthusiasm we left Nairobi via Nyahururu with Maralal as our destination for the first night. A drive of over 350 km of which, about half would be done on tarmac, the last good road we would enjoy until our return to Isiolo. 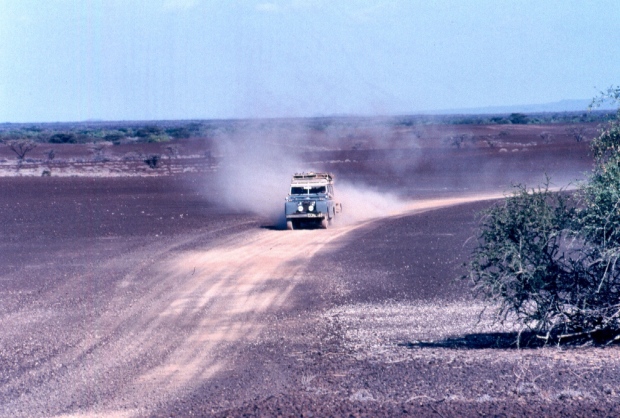 Paul coming with the trailer when things were still going well.

Slowly we left Nairobi and drove along the eastern wall of the rift valley towards the north and soon passed some of the landmarks we knew well, Mt. Longonot and Lake Naivasha. We passed Nakuru and reached Nyahururu from where we headed across the Laikipia plateau towards Rumuruti on a good dirt road. Once we passed the latter, the road narrowed as it started to climb towards the 1,965m of Maralal, unknown territory for us. Our excitement grew and things started to happen!

The combination of a heavy trailer being towed uphill in a hot climate started to take its toll and Paul’s Land Rover’s engine started to heat up. When I saw him flashing lights at us we stopped and, after seeing the situation, decided to wait for the car to cool down and then see what to do as we could not see anything obviously wrong. This happened about 30 minutes later and we decided to resume the journey.

After a few kilometres Paul stopped again and it was clear that the problem needed a more radical solution in order to -at least- reach Maralal. We could not lighten the trailer so we decided that we should tow it. Although our car was shorter, it was much newer and we hoped that it would be better able to withstand the effort.

Luckily the car put up with the extra burden and that is how I acquired the responsibility of pulling the rather large trailer all the way not just to Maralal but to Koobi Fora and back to Nairobi, learning on the job! The first thing I quickly got to terms with was that my driving style needed to change if we were to survive! Every time we braked, we could feel the trailer’s inertia pushing us and slow us down by severe jerks when we needed to accelerate. Gradually I got the hand of it and made good progress, all things considered.

Quite late that day we reached Maralal late and we set up camp with the aid of the car lights at the Catholic Mission. It was very cold and through the mist we caught a glimpse of the very old and somehow decaying cedar trees (Juniperus procera). This cedar is known as African pencil cedar, obviously from which pencils can be made. These trees were part of the highland mist forest, indigenous to Maralal mountain.

All the cedars were decorated with Old Man’s Beard or Spanish Moss (Usnea spp.) an epiphyte or plant that grows on another but not as a parasite. The area was renown for been forested by these species but there were not many left, at least around the area we were.

Although leopards were common, we did not see any while we spent a cold night and we were ready to go as soon as we felt strong the following morning.

The following day we continued towards the southern shores of the lake. The road went down until we reached flat ground. On the way we turned into a small track sign-posted “World’s View” or a similar name. We were curious to see what it was but soon our curiosity turned into impatience, as the road was endless. We stopped and discussed our situation but decided to go to the bitter end rather than to turn around.

The long drive was worth its length and every shake we experienced not to mention the inhaled dust for, at the end of it, we were contemplating the southern tip of Lake Turkana, bright green against which rather recent volcanic cones were prominent. Southern Island could be seen far off towards the north as well. We were all speechless for a while and I believe that we were far too impressed to take pictures as I could not find any!

Once we filled our eyes and minds with such an unforgettable view it was time to move on as we still have some kilometres to drive before arriving to our next stop by the shores of the lake. We retraced our route and eventually we got back to the main track, with the image of what we had just seen fresh in our minds.

The road turned to rough and sharp volcanic rock while we crawled towards the lake and, somehow, we went over a small hill avoiding large black boulders and we got to the lake. We left its shore on our left and continued on the black track that turned inland through dry bush for quite a distance until we could see a large mountain that we -correctly- assumed to be Mount Kulal. 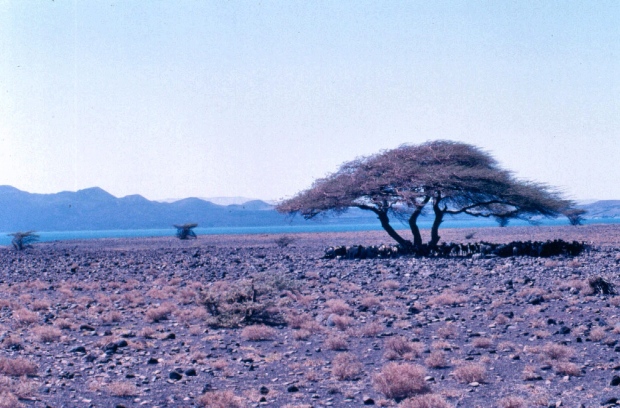 Shade booked by Turkana sheep and goats. No room for us!

A Grevy zebra, a “special” of Northern Kenya.

With its 2,300m Mount Kulal dominated the landscape and we could just see its two peaks but in order to see its evergreen forest where cedar trees and lammergeyers are supposed to be found we needed a much closer approach that was not part of our itinerary.

Eventually the track turned left towards the lake and, again, we got to its shores in mid afternoon. We were still south from Loyangalani and there were sandy beaches. Tired we stopped to contemplate the lake and soon a group of Turkana came to greet us and to watch us from a distance. It was very hot so we had a quick swim -after checking for crocs- and then started preparing our camp.

It seemed that Mt. Kulal acted as bellows blowing very hot air towards the lake but we were prepared to protect ourselves from it. Or so we thought… As rehearsed in Nairobi our cars were parked parallel to the lake at about 10m from each other and then, once the tarpaulin was dug up from the depths of the trailer, we proceeded to assemble it.

We immediately realized the difference between setting it up in windless Nairobi as compared with the true hot gale coming from Mt. Kulal. After quite an effort from all five of us, we managed to tied it to the two vehicles and create a shelter although the wind was still passing under it and through the sides. I am sure the Turkana members of the public watching us had a good laugh about the antics of the bunch of “mzungu” [1] trying to get blown away into the lake instead of settling down!

We soon realized that we could not achieve the expected results and, as light was fading, with our pathetic wind breaker flapping loudly and constantly, we proceeded to organize our camp. However, after a few minutes we heard a ripping noise and our tarpaulin became a gigantic green flag flapping in the wind, held to only one of the cars.

We decided to untie it before it flew into the lake and drove the cars together across the wind and use them as a shelter. I am sure the Turkana visitors approved of that! Unfortunately camping was still difficult and, at some stage, following a particularly strong wind attack, all our light stuff including chairs and clothes flew off towards the lake, followed behind by our complete fire together with our pans, including their contents! 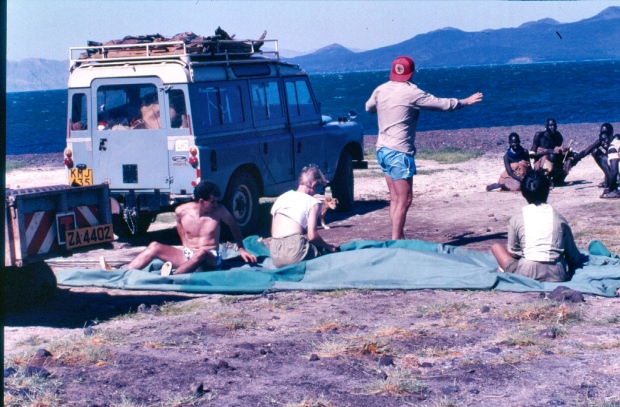 After the struggle, the tarpaulin became our floor!

In view of the crisis, we had a tinned dinner and did not bother to put tents up but slept under the stars behind our cars putting up with the occasional gust of wind as it was a hot night. I still remember that I had difficulties to go to sleep as my hair (quite long then) kept hitting me on the face and eventually I needed to wear a cap to be able to stop it from bothering me! After that I managed some sleep.

Luckily, the following morning was windless and we could enjoy a very needed English breakfast. After short walks in the beach it was time to move on to cover the approximate 200 kilometers we had plan for the day. 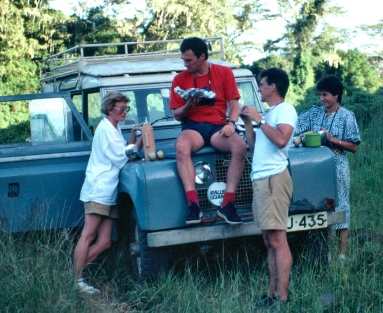 A break on the way. Else (left) drinking mate!

A Grevy zebra, a “special” of Northern Kenya. 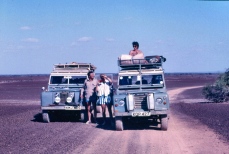 The landscape while approaching the lake.

We drove north and, somewhere after Loyangalani while driving close to the lake, we encountered a solitary mzungu walking in the opposite direction. He stopped us. He was a young man with severe sunburnt that just managed to ask for water despite his mouth being very dry and his tongue rather swollen. We gave him some of our water and filled his water bottle and, as soon as he got the water, without saying a word, he just walked off, ignoring our offers for help!

Still thinking about what this lone walker would have been doing there, we followed the road that at this point moved inland and then run parallel to the lake. After quite a long drive we go to the entrance of the Sibiloi National Park, created in 1973 for the protection of paleontology sites and wildlife. It is 1,570 km2 of semi-desert habitat and plains bordered by volcanic hills, including Mount Sibiloi.

Migrant waterfowl stop here and many of the more than 350 species of aquatic and terrestrial birds found at Lake Turkana can be spotted here together with zebras, Grant gazelles, lions, leopards, striped hyenas, Beisa Oryx, greater kudu, cheetahs and northern topi. Sibiloi is also a crocodile breeding area and the Turkana, the Gabra and the Dassanach ethnic groups surround it. 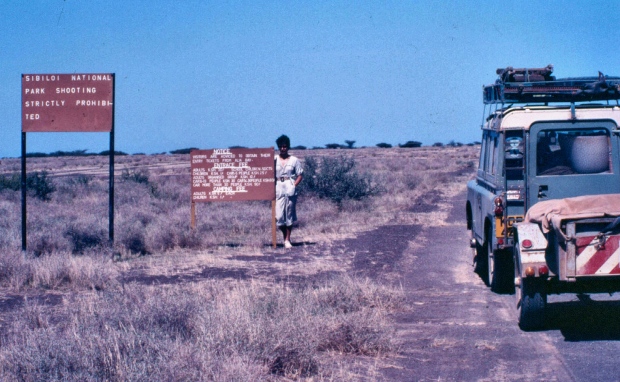 Mabel at the entrance of the Sibiloi National Park.

After entering the park we stopped briefly to look at the rests of a petrified forest and, in the afternoon, we got to a dry river bed where we decided to go against the manual and risk the unlikely flush flood camping there on it as it offered a nice and soft sandy bottom, quite a change from our rocky and thorny surroundings and, most importantly, it offered a pleasant windless environment!

There we spent a rather pleasant night, again under the stars, as the temperature was still hot. The following morning, after another excellent breakfast, we broke camp and left for the next few kilometres that remained before getting to Koobi Fora.

[1] A term used in Kenya to refer to white people.