Jackals are intelligent animals, often overshadowed by larger predators. This one was very relaxed but did not miss detail!

The 27th dawned unusually overcast. No lions roared last night and if they did, they went unheard as the Harare-Mabalauta drive knocked us out and we only managed to leave the bed at about 07:30 hs, not a really early start for a game drive! However, being the sole occupants of the camp spares you from being criticized by any snob colleagues… So, without any pressure we went off after a coffee.

A herd of buffalo were finishing their morning drink and heading back to the bush to feed. The sighting of buffalo never fails to transmit a feeling of things wild and tough. Although cattle-like in their herd behavior, they are reputed to be among the most dangerous bush animals. I have heard and read many stories of people finding themselves in trouble when they come across the lone males that have been chased off from the herd. A colleague, while tending tsetse traps, was chased and treed by one; once up the tree, luckily, the buffalo went away. However, very often they are alleged to hang around waiting for the “victim” to fall asleep and drop so that they can trample or gore them. The problem my friend faced after the buffalo left was climbing down a very thorny tree that he only noticed after his adrenaline level went back to normal.

We had not driven 50 metres from the camp gate when we came across some rather large and familiar paw marks on the sandy track. The lions were very close to camp and we felt bad for sleeping deeply as they must have roared well! There was at least one animal and it had walked towards the camp and its pen gate, over our yesterday’s tire marks. It looked as if it had gone down to the river for a drink. We set off with recharged enthusiasm following the watercourse and its incredible vistas.

Lions had walked on the sand, close to the entrance of the rest camp.

After about two kilometres we were surprised to find five jackals. One of them looked pregnant. Four slowly moved off but one remained all the time lying down, relaxing and returning our stare from time to time, its ears moving in all directions as not to miss anything. If they had a kill or were coming from one, we could not tell.

We continued on our way and saw lots of impala and some greater kudu. Although there were signs of elephant all over, we did not see any. As our earlier experiences in the park showed, it is difficult to see elephants here as they are wary of humans and tend to move at night. The sign found at Mankonde Pool encapsulates the situation clearly. It is located inside a tower of about five metres high. It says:

Walking around various view points, taking in the views, and walking in the dry river bed accompanied by serious stone collecting and birding took quite a bit of our time. While walking we saw hyena tracks, both footprints and the whitest spoor I have ever seen. We also saw leopard prints and what we thought were wild dog paw marks as well. All spoor looked rather fresh and we kept looking around in case the owners were still nearby and hungry!

Elephant spoor was all around us during our walks in the river beds.

Hyena dung turns white after a while because of its high calcium content. This one was very white!

We visited Muwatonga and Rossi pools. We confirmed that the former still remains our favourite spot. There, you can sit on a comfortable natural rock balcony about four to five metres from the river and take in the view. At this spot the river runs gently through rocks and wide deep pools of crystal clear water are formed. Here the crocodiles cannot hide. They are either basking in the sun or -still clearly visible- under water. The water transparency also allows you to follow shoals of tilapia of various sizes cruising slowly or just basking themselves while the fast streamlined tigerfish dart by in groups of three or four. 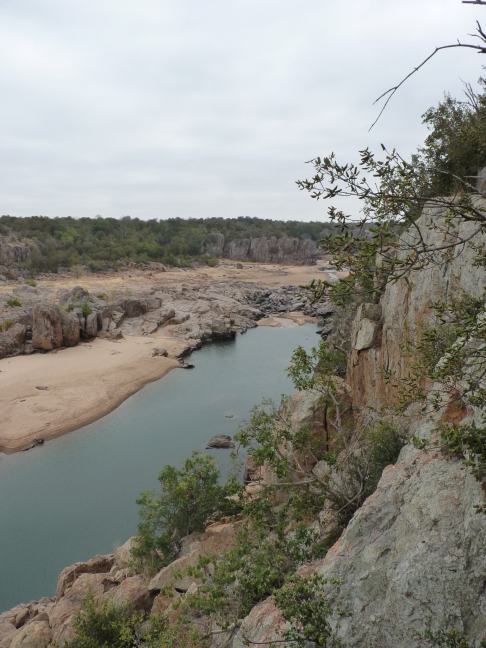 With its crystal clear water, Muwatonga pools are our favourite.

The frequent splashes heard and seen indicated that this is far from a peaceful pond but rather one where mistakes are paid for with loss of life. It is not rare, after a commotion is herd, to see a crocodile gulping down a fish outside the water only to submerge again when he is done. The sight is another reminder of the danger of crocodiles and the need to walk at a good distance from the water’s edge.

Crocodiles in Gonarezhou are also partial to quelea-eating. It works like this: like its insect colleague the locust, the quelea birds live in flocks that sometimes form “swarms” of many thousands flying in coordination pretty much like the starlings in the European skies. When they need to drink they land on the branches overhanging the river. As they keep landing, the birds that landed first have a quick drink and fly away to avoid being pushed under water by the sheer weight of those coming behind them that subsequently take their place. The branches get more and more crowded as more birds land, to quench their thirst.

While the birds accumulate, the crocodiles, knowing this phenomenon and remembering what they did yesterday, converge under water towards the key areas. Then, all of a sudden, the water explodes and a crocodile jumps out of the water shutting its mouth on the branch. Then for a second or two, it hangs there and then keeping its mouth firmly shut, it slowly slides gently down the branch, leaving no trace of birds or tree leaves. It then lands in the water and swallows its mouthful of prey, together with the green salad. This activity goes on for as long as the birds come to drink and, despite taking place every day, the birds still keep coming back in huge numbers, no doubt driven by thirst and short memories!

Aiming for the Malipati end of the park we continued our trip. On the way, the bird chorus suddenly got louder, giving the impression of a synthesizer being used (very similar to the “Cher effect’ in her Believe song!). We had just entered an area of cellphone signal and WhatsApp was doing its best to deliver accumulated messages to my wife’ telephone.

The road offered a few challenges.

The drive ended at the bridge over the Mwenezi at the Malipati entry point. It was Sunday afternoon and some young women were relaxing and fishing under the bridge using porcupine quills as floats. The latter were working well as, after asking the usual “any luck?” question, they produced a couple of nice tilapia that I am sure ended up at their table that night. They were family of the National Parks staff posted at Malipati.

This tree will probably not be here for long.

After a full day in the bush and with fresh memories of the wonderful river views, we slowly returned to camp. Oh yes, I forgot to mention that the right back tire was flatter but I think it was because of all the stones collected! After our shower failure of the night before, we took our revenge. Few things compare to a bush shower coming from a Tanganyika boiler and this time was no exception.

The bat came back to our chalet. This time it landed inside our empty bath, unable to climb its slippery sides and, again, it needed our assistance to fly off into the night.