In an earlier post I described how Crocodiles[1] were stalking and catching Impala at Masuma dam[2]. What I did not mention yet was what happened next. You will not regret reading on!

A “panorama” view of Masuma Dam.

The time of the observations correspond to the end of the dry season. At this time of year many animals come regularly to drink at the dam. Apart from elephants, Greater Kudu, Waterbuck, Impala, Zebra and Warthogs were seen everyday. We also saw large flocks of guinea fowl, various doves, vultures, kites, buntings, starlings, among others. At the time there were sixteen resident Hippos, both adults and young animals as well as at least six mature Crocodiles. 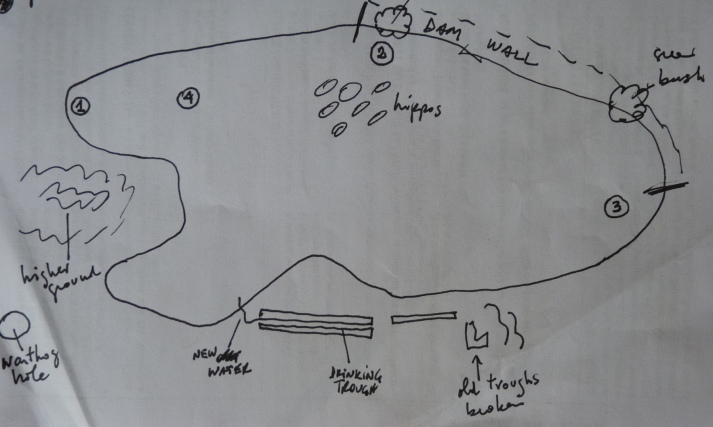 Map of Masuma Dam showing the various places mentioned in the text.

Impala herds drank mainly in the morning, mostly at Point 1 in the drawing. Aware of this daily event, Crocodiles were observed to ambush the Impala by positioning themselves across the small bay where the antelopes drank. Usually one of the Crocodiles would approach the Impalas in full view up to 1 to 1.5 metres from them. This created noticeable nervousness on the part of the Impala but they would gradually calm down and drink. The Crocodiles would remain immobile for a few minutes and then slowly sink and completely disappear. Most of the time, the Impala continued to drink and moved off and the reptiles remained quietly submerged. 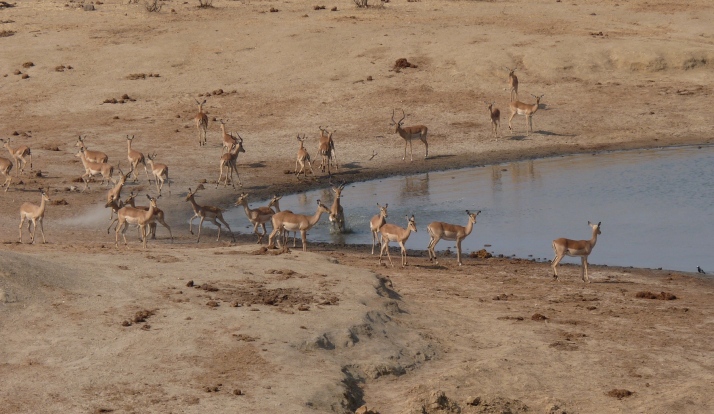 A Crocodile attack at the Impala drinking area.

About two or three times in a morning, the hidden Crocodiles lunged towards the Impala. As soon as the swirl that precedes the attack was noted, the Impala scattered in all directions (including into the water!). The most common outcome was that the Crocodiles failed and went back to the water empty-jawed. On one occasion a young animal was caught from its leg and, after a short struggle, it was drowned. This happened only once out of 8-9 attacks we witnessed. 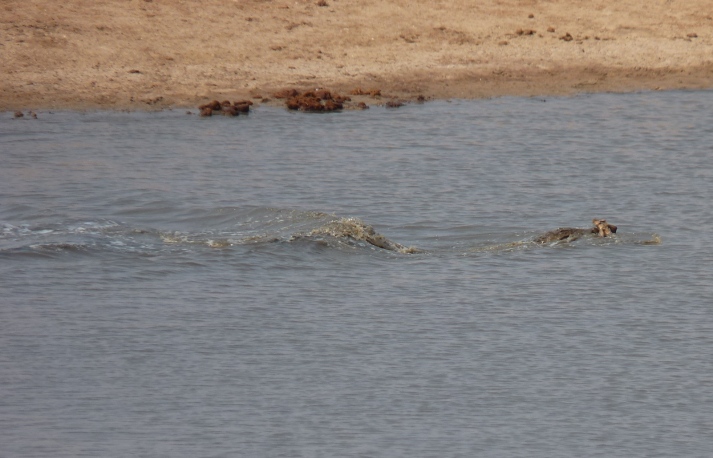 The Crocodile swims away with the freshly caught Impala just before it was chased by the Hippos for the first time.

While the struggle between the Crocodile and the Impala was taking place, two Hippos approached the area and were seen chasing the Crocodile. The latter submerged and took off while the Hippos lost interest and we speculated on their noble “rescue” attempt. 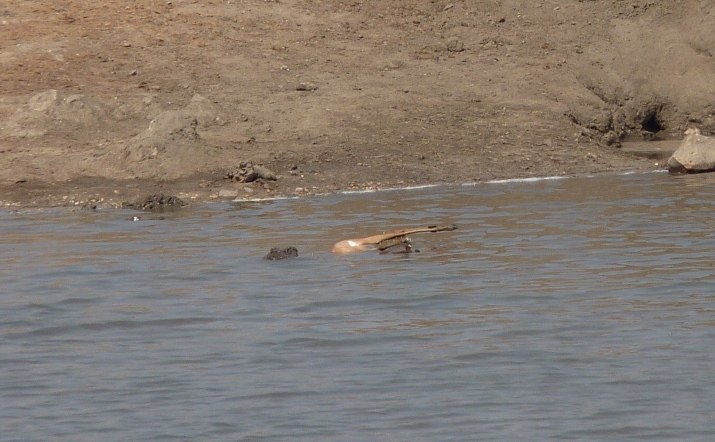 The Crocodile with the Impala at Point 2.

Ten minutes later the white belly and legs of the Impala came to the surface at Point 2 and caught our attention. A Crocodile held the dead antelope and others came to feed on it. This, again, prompted a swift response from the Hippos, who came back and confronted them quite aggressively.

The Hippos “rescue” attempt at Point 2. 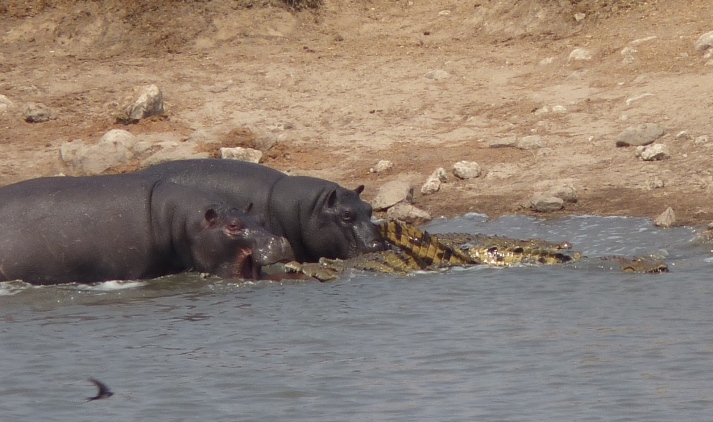 Another view of the Hippos’ “rescue” attempt at Point 2.

The subsequent struggle involved a Hippo pulling from a leg while the Crocodile pulled from another part of the animal. As the Hippo did not have a good grip on the leg (its teeth and mouth do not facilitate tug of wars), the Crocodile retained the Impala and, again, swam off with the carcass (or part of it as we could not see if it was split or broken up) towards Point 3 in the drawing.

The Crocodile avoided the Hippos at Point 2 and moves to Point 3.

The crocodile stayed at Point 3 for about 30 minutes with the Impala (or a large part of it) in its mouth until another Crocodile came and started to pull and tear at the carcass. In about a minute, a hitherto unseen/submerged Hippo[3] burst into the middle of the tug forcing the Crocodiles to scamper again. 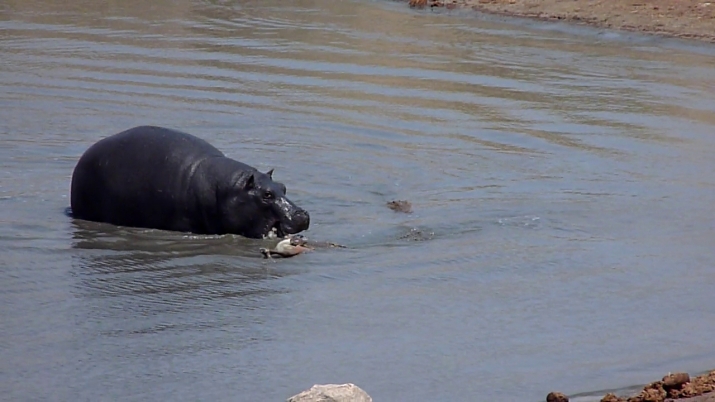 A Hippo moves towards the Crocodile at Point 3.

The Hippo tug of war with the Crocodile!

The Hippo tries to bite the Crocodile. 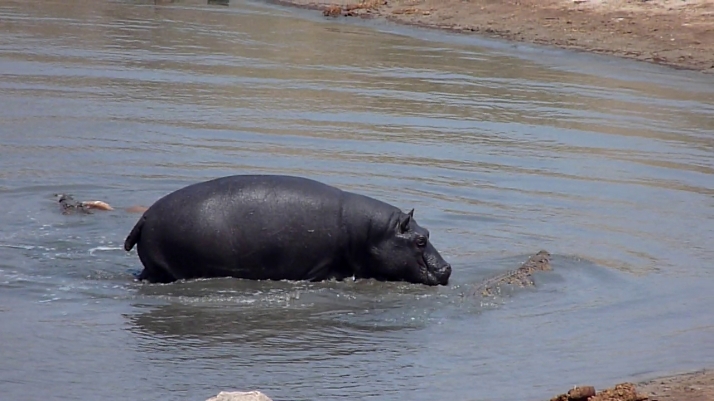 The Hippo chases a Crocodile while the other one escapes with the Impala towards Point 2. 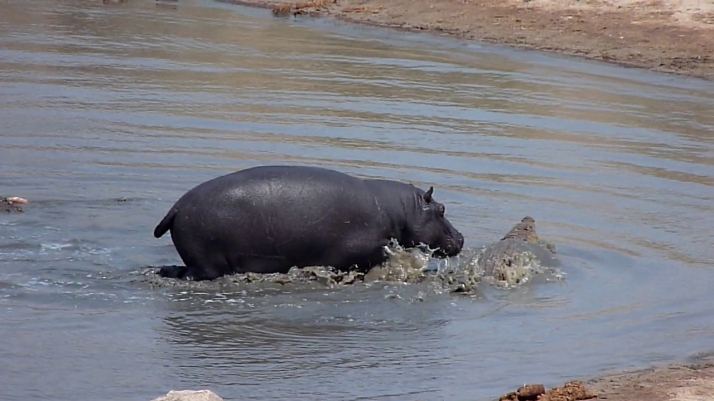 The Hippo keeps chasing the Crocodile while the other one swims away.

While the Hippo chased one Crocodile the other one, still holding the carcass, swam back to Point 2 where it remained for another 10-15 minutes when, once more, its companions arrived and started to tear at the carcass. 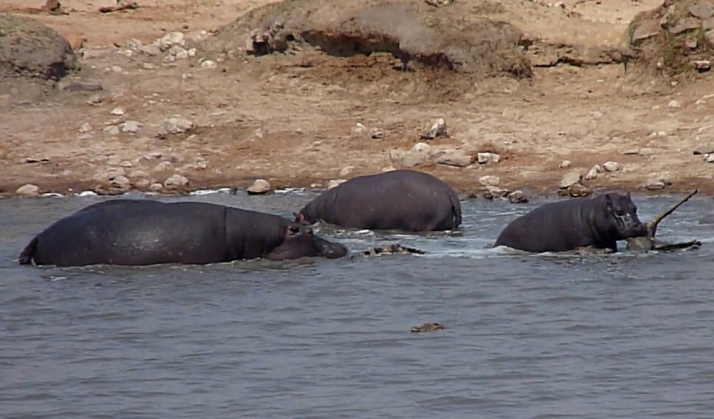 The Crocodile are attacked again after arriving at Point 2. 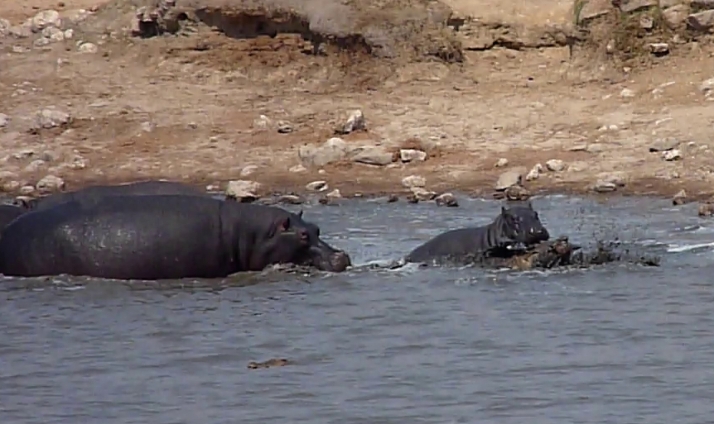 Another view of the struggle for the Impala at Point 2. 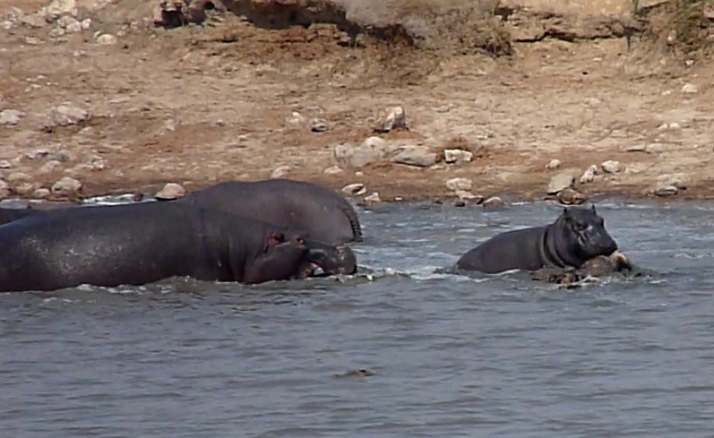 Another view of the Hippo vs. Crocodile struggle for the Impala at Point 2.

The Hippos came again and were seen clearly attacking the Crocodiles and even biting them.

One large Hippo bit the head of a Crocodile, who swiftly moved away to avoid severe consequences while other Hippos were also seen biting crocodiles on different parts of their bodies. In the commotion we lost sight of the

Calm was reinstated at the dam for about 20 minutes. The next thing we noticed was a great commotion at Point 4 where the Hippos began to congregate. They were clearly competing for something and eventually several were seen apparently “mouthing” the Impala. On closer observation they were actually chewing and apparently swallowing while bone-cracking noises were heard. 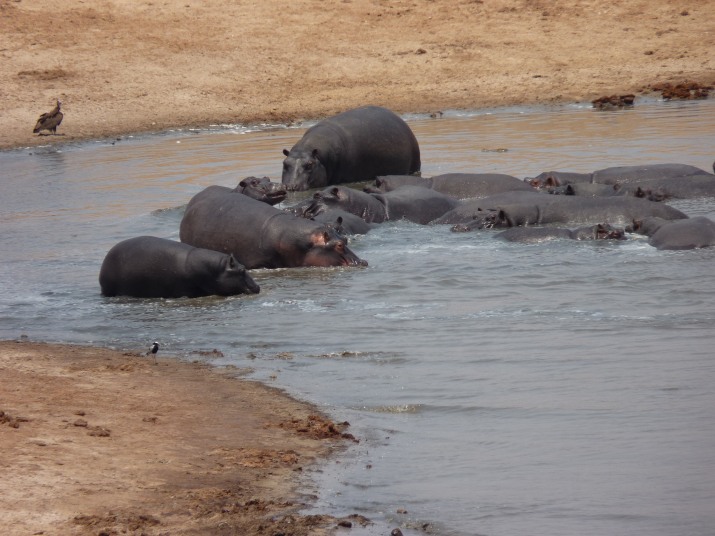 After snatching the Impala from the Crocodiles at Point 2, they congregate to feed on the Impala carcass.

Another view of the final stages of the Hippo feeding frenzy.

Unbelievably to us, at the time of these observations, the Hippos were eating the Impala! After it was consumed the Hippos went back to their normal place and peace returned. The moment they lost the carcass, the Crocodiles did not try to recover it.

Confinement in the dam was the best possible explanation I could think at the time for such aberrant behaviour. The event appeared so unusual that, on arrival in Harare, I went straight to the computer to check the Internet. Not surprisingly, I found earlier references of similar incidents and the first report of carnivore behaviour in Hippos came from Masuma Dam![1]

As, very recently the BBC and National Geographic have both published articles on hippo cannibalism[2] I put together these observations to contribute to our general knowledge. I have also contacted Mr. Dudley and we are collaborating on the subject that may result in further work being published in the scientific literature.

[1] It was not easy to see the number of Crocodiles or Hippos involved in the various incidents described.

[3] I was excitedly filming the scene!