I already described hippos competing with crocodiles to eat their impala prey at Masuma dam in Hwange National Park [1] and this observation was part of a comprehensive publication on the transmission of anthrax among hippo populations [2].

Hippos trying to get an impala carcass away from the crocs.

The 2018-19 rainy season in Zimbabwe was very poor and Hwange National Park was no exception receiving much less than its 576 mm yearly average. So, during a visit in mid-September 2019 the park was very dry and several of the pans were drying or already dry.

This situation was also severely affecting some of the dams that require pumping to keep an acceptable water level. Both Nyamandhlovu and Masuma dam pumps were hardly able to cope with evaporation and elephants’ thirst despite working full time. 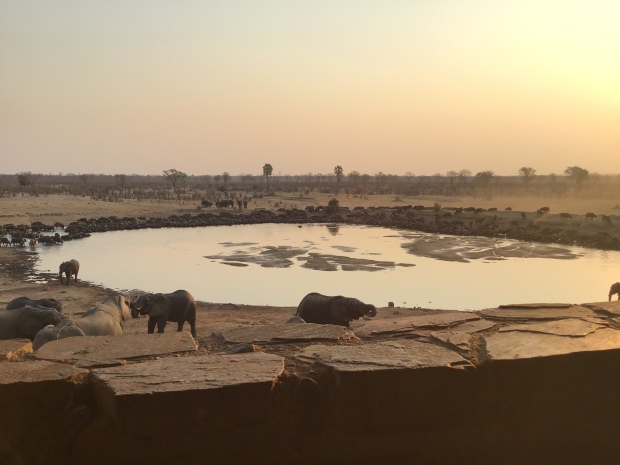 Only one hippo was seen at Masuma of the usual number of about sixteen individuals that we had seen during earlier visits. We believe that the missing hippos had moved to Mandavu reservoir, a much larger water body situated 15km away.

So, we went to visit Mandavu and noted a large number of hippos still there as there was plenty of water. While observing the hippos we noted a dead one floating close to the shore opposite to the picnic site and, as expected, there were a number of crocodiles surrounding it.

Hippos and crocodiles around the dead hippo carcass. Credit: Julio A. de Castro.

There were also a few hippos and they were feeding on their dead relative!

Joe Dudley has mentioned to me that he believes that hippos are not able to open up a carcass and that they depend on natural fermentation or on other carnivores to do so in order for them to feed. It is likely that the crocodiles had eaten part of the carcass and the hippos were taking their share. The hippos were seen pushing the carcass and submerging to later emerge chewing and swallowing.

After about one hour the wind started blowing the carcass towards the centre of the lake and the hippos did not pursue it, staying at the opposite shore with their pod.

This is not the first report of hippo cannibalism [3] but the present observation adds the Mandavu reservoir to other areas in Africa where this phenomenon has been reported.