Although we have visited Rome several times and lived there during 1993-1997 and 2006-2010 we are never bored when we are here as it is the city of exploration and discovery as well as surprise! The advantage of both having time and knowing the city quite well enable us to get lost in it with pleasure.

This visit was no exception and we walked in the general direction of the historical centre, with a quick detour at FAO to address pending minor administrative issues. As usual a number of monuments were being restored and were therefore totally or partially covered and invisible to the normal visitor. Seeing them reminded me of the difficulties the Roman authorities must face in order to preserve the city as well as the costs this incurs!

This time a section of the Colosseum was being repaired but we could still enjoy part of it.

The Colosseum never fails to amaze.

What about a “selfie” with a “Colosseum background”? Even if it means stopping on the busy road…

As the weather was very pleasant, our walk continued and took us to the great views of the Roman Forum. Although we have entered it before, we realized that in order to appreciate it as a whole, the best place to see it is from above. Not being archeologists, our interest in ruins goes as far as admiring their present beauty while trying to imagine what the place must have looked like a couple of thousand years before (an impossible task unless they are whole!). 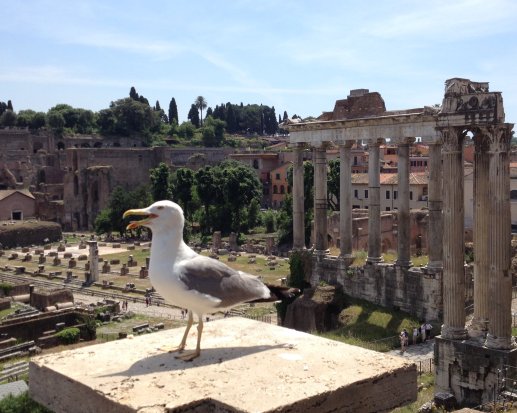 Anyway, in front of our eyes were the Temples of Saturn, Vespasian and Titus, Cesar, Castor and Pollux as well as the Temple of Vesta; the Arch of Septimius Severus and other remarkable surviving ruins of what once was the centre of Roman public life. 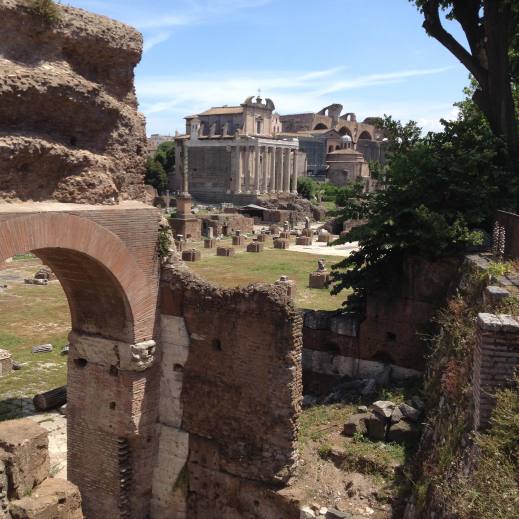 Our contemplation over, our walk continued downwards until we reached the Trajan forum, built in 106 by, not surprisingly, Trajan! The spoils of the conquest of Dacia, with which the forum was built in 106 must have been lean as it is built in bricks (maybe the marble had run out…). Trajan’s Column is next but it was built later (113), quite new for Roman standards!

The flag of the Order of Malta adds a touch of colour.

Once we reached the end of our legs’ strength (there was still an infinite Rome waiting!) we decided to return to base for a well earned shower and rest. We chose a short walk down “memory lane” that followed my first-ever walk in Rome: from Via Capo D’Africa, 47[1] to FAO via the church San Gregorio Magno al Celio. Little did we know that a final Roman act waited us!

The smell of acrid smoke hit us near the church and we saw a small leaf mound on fire, probably the result of the work of a Roma City Council gardener. We did not think much of it and walked past noting a flock of police (women and men) nearby chatting animatedly. Nothing wrong there either. Suddenly though, we heard a siren and, lo and behold, a fire engine came rushing in to control the on-going conflagration!

Italy is the cradle of Opera and clearly Rome’s inhabitants have a flair for drama, even when dealing with really mundane occurences!