During our previous visit to Mana Pools in September[1] we stayed at Gwaya camp. In one of the walks around camp I found a rather derelict water tower that still supplied us with this important liquid. A leaking water tank sat over a square and now door less room. The latter and the surrounding area were very damp on account of the long-term water leakages that run down its walls ending up feeding a number of puddles where animals came for a drink. The area was a green blotch on an otherwise bone dry landscape.

It was near to this spot that my hidden camera trap almost remained secret for good as buffalo and lions moved in[2]. At that time, with my attention focused on recovering the camera I had a brief look inside the base of the tower expecting to find bats. I found butterflies instead but did not spend time there, as I was more concerned about avoiding lions and/or buffaloes!

During the last visit in October 2015, we noted that Gwaya was deserted from both campers and dangerous animals, so we went back to the water tower to have a better look, hoping that the butterflies were still there. There were! This time I managed to enter the room although its floor was waterlogged as water was also filtering in the inside of the tower. The combination of intense heat and abundant water had created a tropical microhabitat that was still home to hundreds of small butterflies, settled on the walls.

The view from the door.

A closer view of the butterflies.

My entrance disturbed them and they took off all at once. As they did not wish to leave the dark damp area, a large cloud of them formed and flew around my head. For a while I felt like Mauricio Babilonia of Macondo[3] with the difference that these butterflies were brown and not yellow! Eventually they settled down again and I managed to take the pictures that illustrate this post.

They took off when I entered.

I believe that they were Elfin Skippers (Sarangesa motozi) that Migdoll’s Field Guide to the Butterflies of Southern Africa describes as an uncommon species found mainly in rain-forests in the region where it feeds on Barleria, Justicia and Perithrophe, members of the Acanthaceae flowering plants. 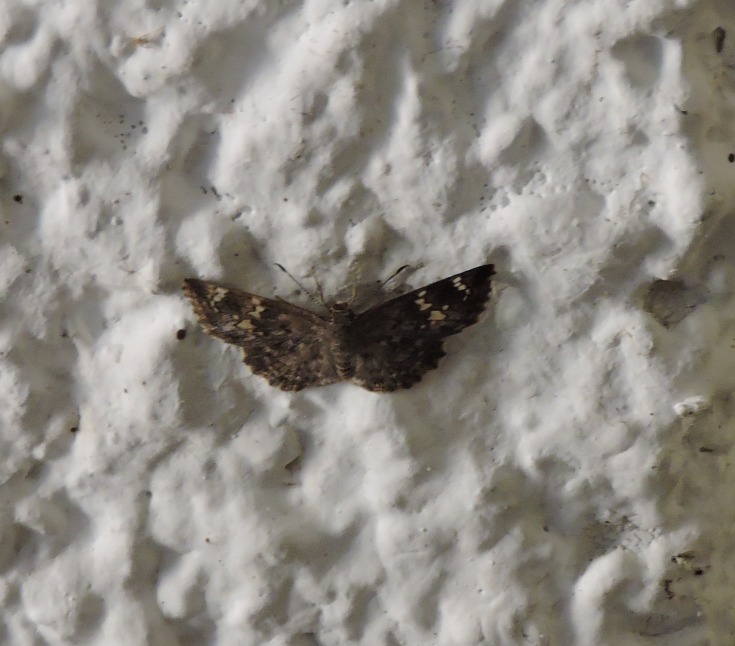 A lone and rather bloated gecko also resided in the room, his condition revealing that it did not know what hunger is!

I am sure that this resident colony of butterflies would offer a thrilling study to a lepidopterist! Not being one, I left them thinking on how much I enjoyed reading García Marquez’s magic realism and that I should revisit his work.

[3] Interestingly, to get to Mana Pools you cross the Makonde District!!!