At a hot Mana Pools it was either me roasting some meat or eating from tins as my wife, usually an excellent cook, was feeling too hot to get involved in any heat-generating activities she was busy engaged in the opposite; cooling off with the aid of water and fans in order to survive another day! Resigned and lazy (independent from the heat), I lit a small fire taking some coals from the Tanganyika hot water boiler just at the time when the temperature started to go down.

I am an atypical Uruguayan. I am scared of horses and unable to ride them or -worse still- do a good asado[1]! Hearing only words of encouragement coming from the shower room I attempted at overcoming my shortcoming and managed to get a good fire going. I soon re-confirmed that one thing is to have a good fire and another is to use it well! I did not, as usual as the nice sirloin piece was well cooked top and bottom but very alive inside, even for us that like our meat rare! Anyway, we ate the better cooked pieces while leaving the rest too roast for a while longer until we managed to have a fairly decent dinner.

On account of the ambient temperature, the after dinner routine at Muchichiri was to seat outside by the river to listen and attempt to identify the many bush sounds that are heard in Mana Pools. Ocassionally the sounds or footsteps would be heard very close needing an inspection with our searchlight to identify the responsible both out of curiosity and self-preservation. The main “culprits” would be hippos but elephants and a number of antelope were often found around the lodge. At one stage we caught a slight movement between us and the river and we found a relatively scarce white-tailed mongoose scurrying through the undergrowth. 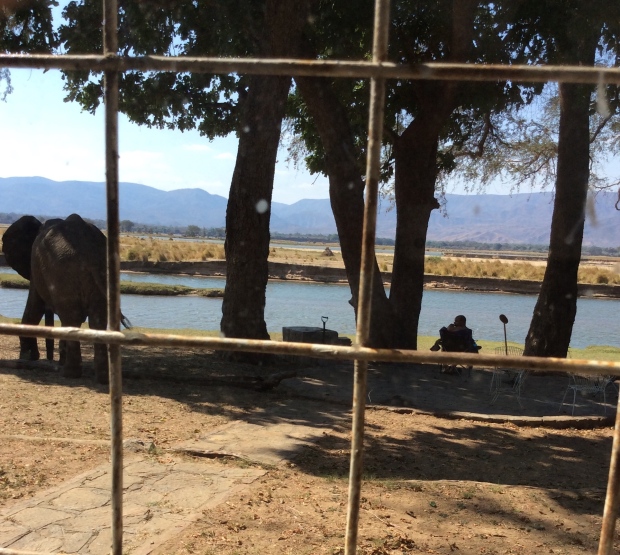 From the lodge my wife caught the bushsnob napping again, oblivious of the passers by. With the night visitors was different…

The mongoose gone, my wife read and I wrote notes for this posts. I got quite involved in what I was doing so when I heard a hushed “Have you seen it?” Coming from my wife I lifted my head with it still inmersed in my writing. The spotted hyena was looking at me from very close quarters, quite a shock when you do not expect a visitor like that! “!@#$%^&* its huge” was all I could profer. It was indeed a very large hyena that was looking at me from inside the camp light circle!

Although my wife assured me that she heard it coming and got a whiff of its pungent smell for a while, I was caught totally unawares. I experienced a mild panic attack as many years had passed since I had another similar encounter. All I managed to say was “ssshhhhhh”, the kind of noise that -in our culture- is usually reserved to scare away chickens! It was a pathetic and out of place gesture but it worked mainly because the hyena did not have hostile intentions towards me! I am sure it realized that, despite my years, I was yet to reach full carcass status! As usual, it moved off fast but remained around camp until we retired to bed.

The hyena did visit our place a couple of times later on as documented by a strategically placed camera trap (below) while I was safely in bed and inside my mosquito net on the top floor of the lodge, feeling like a safe animal!