After a few months after our arrival in Kenya in the 80’s[1] we eventually left the Muguga House hostel for Tigoni where we rented a large house belonging to the Harvey family. Tigoni is about 40km northwest of Nairobi, on the eastern side of the Rift Valley at over two thousand metres of altitude. Indigenous forest islands still remained then, among the large tea plantations. Several animal species still inhabited the area, the most notable being the conspicuous Black-and-white Colobus monkeys during the day and the bush babies at night, with their loud and somehow scary calls. 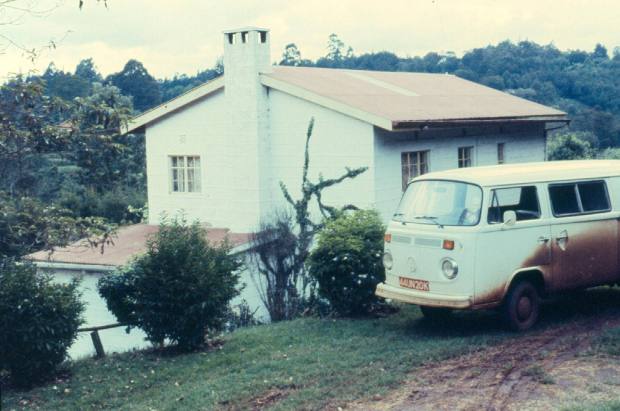 The land at the back of the house had no fence or wall (imagine that today!) and therefore we were able to walk towards the nearby stream located about two thousand metres down hill.

A Sunday that we were not camping in the bush, we invited our friend Ranjini for lunch and,  afterwards, we decided that going down to the river was a good idea to help digest our food. So, armed with our binoculars and wearing long trousers to protect ourselves from thorns and ticks, we set off. About half way down the red and slippery hill our “private” path joined a “public” wider lane where the local inhabitants went about their business rather than fun walking like us. 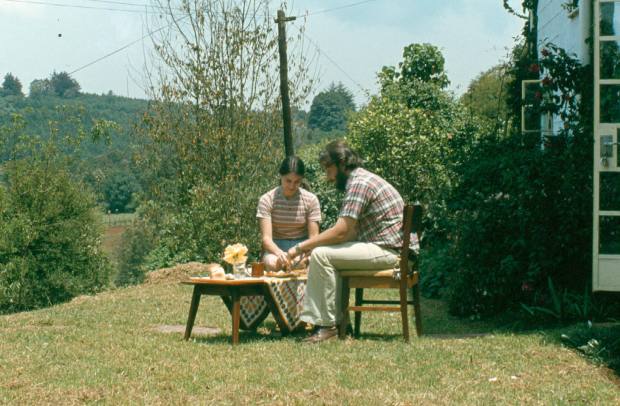 We soon arrived to the stream and, after walking about the area for a while; we found a shady spot where we decided to have a small walkers consultation to decide our next steps. The ideas put forward were whether to continue up the other side of the ravine or to return the way we came and enjoy a cup of tea at home. The latter was gaining consensus when, without warning, a fire started in my ankles and started spreading up my legs. I saw no smoke but noticed that I was standing in the middle of a colony of siafu![2]

The nasty meat-eaters, amazed by their lucky find, were not wasting any time in processing it! Without wasting a second and forgetting about being normally shy (?), I downed my trousers in a flash (excuse the pun) and checked my hurting parts. What I found was not encouraging: a few dozen soldier ants had climbed up the inside of my trousers. While some had already locked their jaws on my pink flesh, others were still going “upwards”…

Yelling “siafu!!!” to alert my companions, I started to grab and remove those still trying to reach tender places and, only when I smashed them all, I focused on removing those that had already bitten me and were going nowhere. This is easier said than done! Pulling them in a hurry (what else can you do?) only makes their bodies detach, leaving their heads with their rather outsized jaws still embedded in you! While this was going on, my companions, luckily looking the other way, moved off fast and left me alone to deal with the aggressors. Before they moved off, I caught a glimpse of their expressions that did not help. Instead of seeing sympathetic concern or at least indifference towards my predicament, they were amused! I am still trying to forgive them for this!

It was in the middle of my painful struggle when I became aware that I was still being watched. I turned around and saw that my antics had gathered some public! A growing bunch of Kikuyu kids were carefully watching me. Once discovered, they started to make comments, pointing at my nakedness and, worse of all, they laughed loud! I was clearly a “first” for them but that failed to amuse me. I told them -mainly with gestures aided by my basic Swahili- to go away. They only moved back a couple of paces, unwilling to stop watching the sight of their childhood: how a half-naked muzungu[3] “danced with ants”.

(Almost) embarrassed and in a desperate effort at damage control I immediately lifted up my trousers. Although this calmed down the young Kikuyu crowd, it did nothing to placate my traitorous companions’ enjoyment of the scene of my distress! So, ignoring everybody, with a great effort I put on my best neutral face, and started walking back to the house, still bringing with me a considerable number of large ant jaws for later extraction.

Despite my rather unpleasant experience, siafu are not a bad thing as they control a number of otherwise harmful pests for crops and their storage. They also take care of other undesired beasts such as ants, roaches, spiders, and everything else that crawls or creeps. Later, while busy un-plucking mandibles my thoughts did focussed of their beneficial side but, although I could somehow see it, it did nothing to relieve the consequences of my encounter!

[2] Siafu (in Swahili) are members of the Dorylus genus, also known as driver or safari ants. They are army ants between 1-15 mm in length found primarily in central and east Africa in large colonies (up to several million individuals). They move in columns as they travel from their lair to the hunting field or they spread when actively hunting by sensing the carbon dioxide that insects and animals breath out. Aggressive soldiers protect the colonies.

[3] A common term used to refer to “white” people.