The morning of Saturday 17 July 1982 (I remember this day well!) we got up early to pack our car with camping gear for a safari to the Maasai Mara Game Reserve. We had booked the Sand River campsite for a couple of nights.

We were about ready to go when, totally unexpectedly, someone walked into our front garden! It was a messenger from the Kenya Posts and Telecommunications Corporation coming to deliver a telegramme, the first we had ever received! As we had no working telephone in the house (and cellular phones were not yet invented!) a telegramme was almost the ultimate in urgent communications. Being far from home, it also carried a dose of dread as it could carry bad news from home. So, with wonder as well as some trepidation I read it, trying to prepare for the worst.

Its contents were surprising and shocking but good! It read: “We arrive tomorrow” and it was signed by two of our best friends: Nazar and Aurora. That was that, not even a date! We were thrilled that they had finally decided to come to Kenya. We knew they were travelling to Piediluco, Italy to accompany their son Juan José that was rowing at the 1982 World Rowing Junior Championships representing Uruguay and we had insisted that they extended their journey to visit us although we knew that this would be very difficult for them!

Our initial elation turned into mild panic when the fact that they could be at the Jomo Kenyatta International airport (JKIA) at the time of reading the telegramme sunked in! Expecting the worse we immediately drove to JKIA as we knew that most flights from Europe would arrive by mid morning. We were on a rather blind chase and during our journey we did a lot of speculation, not only about their arrival but also on contingency planning regarding our planned safari.

Our fears that they had arrived the day before and were stranded at the airport unable to communicate were unfounded and perhaps exaggerated as a thorough examination of the arrival area gave no results. Unable to get any passenger information from the possible airlines we decided to stay put and wait. After about an hour or so, a few flights from Europe arrived within thirty minutes. We crossed our fingers and, eventually, we were rewarded when our friends emerged looking dazzled at what they were seeing around them but otherwise unaware of our earlier dilemma and very happy to see us.

It was an emotional reunion and, after an exchange of the usual family news, I casually announced that we were aware of their long journey but that we were off to the Maasai Mara, leaving as soon as possible. As expected (they had no real choice!) they gallantly accepted the invitation and, after passing by our house to finish our packing, we set off with their luggage still unopened!

Nazar, had a tiring trip, and he was also suffering from a gut complaint. His time during the journey to the Maasai Mara was spent drinking abundant amounts of warm cola and going into episodes of slumber until, by the time we got to Aitong, a few hours later, he started to talk nonsense with me, a sure sign of his slow recovery. Aurora, on the contrary, was wide awake and did not miss detail, asking questions all the time and gaining in excitement as we moved from Nairobi to the Kikuyu escarpment, the breathtaking Rift Valley views, Narok and beyond into the great green plains of the Mara-Serengeti ecosystem.

Because of our late departure, I drove non-stop and despite the rough road, we managed to get to the gate in time to get to the Sand river camp by the Mara river at dusk. Without delay we started unpacking and finished setting up camp using our car headlamps, as was the norm with us then.

While this was on going, our friends watched, not moving too far from the car, still rather confused with their situation. Our work was cut short, as already in Nairobi they had decided to sleep in the car. Luckily for them, removing the second seat of our loyal VW Kombi was relatively easy so soon they had their nest ready. As soon as we finished with the car arrangements my wife had heated our ready-made dinner brought from home and, although we still had a lot to talk about, we were so exhausted that we went to sleep early.

Camping at the Sand River was ever exciting as there were always plain game in its neighborhood, particularly wildebeest and zebra that, somehow enjoyed crisscrossing the Mara river offering, apparently unnecessary opportunities to their reptilian predators. Their presence also attracted lion and hyena so there were always nocturnal happenings! That night was quieter than expected but still the hyenas came close to camp, their calling amplified by the river. We did not fail to hear lions roaring in various degrees of proximity, above the constant wildebeest snorting and zebra whinnying. Thinking on our friends’ time in the car, we paid the price for our rather busy day and passed out before long.

The following morning, recovered, I got up early as usual and prepared tea and coffee waiting for the other fellow campers to show life signs. My wife emerged eventually but no movement was detected inside the car! A quiet inspection of it showed it to be unscratched. Its windows were totally foggy and I had some concern about whether our friends have had enough oxygen inside there as the car was tightly shut!

My fears were unfounded as, eventually, a hand started to remove the fog from the side window and the smiling faces of our friends showed gradually behind the glass. Eventually they left their protective and damp metal cage to join us for a rather late breakfast and they shared their mate[1].

Nazar offers a mate to the photographer.

As usual with first time visitors, they have heard nothing the whole night as they had slept like logs! We finally had a chance to finish exchanging pending news at leisure.

Fortunately they were fast to adjust and gradually they became used to our ‘bush ways” joining us on a couple of game drives during which they greatly enjoyed what they saw. The frequent appearances of the imprudent hyenas and the lions roaring were not conducive to us persuading them to abandon their cage the following night and they still preferred their airtight environment to the risks of camping in the bush. We understood them well as it had taken us longer than that to get used to camping “al fresco” surrounded by wild beasts! 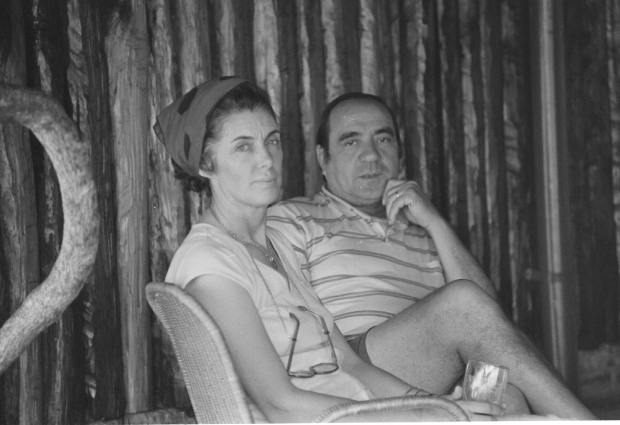 Our friends relaxing at the Mara Serena lodge.

We returned to Nairobi after two nights. This time they were able to appreciate their surroundings much better, including the always-interesting sight of the Maasai people and their manyattas and livestock and they were delighted with the daylight return journey. 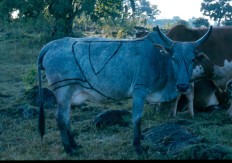 Maasai cow. Note how the branding shows in black over the grey coat.

My work in Kenya frequently took me to Maasailand.

Later on during the week we showed them Nairobi and the wonderful Nairobi National Park and later travelled to Nakuru and Bogoria for a view of the Rift valley, its hot springs and flamingoes. Luckily, they loved the experience but time passed very fast and it was soon time for them to depart, too soon for us!

At Bogoria, our friends, more relaxed, shared our tent.

Their plane left back to Europe at midnight on Saturday 31 July 1982 so we took them to the airport early and made sure that they went through all the departing procedures early until the time came to leave them once they have checked-in to return to Tigoni late at night. Unused to driving at night, we negotiated several road blocks that we thought too many but, as we drove a car with red diplomatic plates, our going was smooth and we got home safely.

The following morning we had arranged with our friend Ranjini to go to the Nairobi National Park so we travelled to Muguga through back-roads to fetch her. Once there she announced that an attempt to overthrow President Moi’s government had taken place at midnight and that there were serious confrontations going on in Nairobi between the Police and students! Apparently, a group of soldiers from the Kenya Air Force had taken over the Voice of Kenya[2] and announced that they had overthrown the government!

A bad picture I took of Moi’s cavalcade before knowing the risks involved!

We thanked Ranjini for the news and quickly turn around heading for home as fast as we could! During the journey we met a large military convoy ready for war heading for Nairobi but we did not know what their stance was at the time! Luckily they ignored us and we, the sole occupants of the road by now, got home safely where we remained -listening to the BBC radio for the latest news- for the following three days until it was confirmed that the attempt had failed[3].

It was lucky that our friends just managed to get away (a while) before the Kenya airspace was closed and that they were over the clouds when all this happened! They remained unaware of their narrow escape until we met them back in Uruguay a year later when they listened to us in disbelief!

[1] Traditional South American caffeine-rich infused drink, prepared by steeping dried leaves of yerba mate (Ilex paraguariensis) in hot water and is served with a metal straw from a shared hollow calabash gourd and shared among drinkers.

[2] From 1989 it became the Kenya Broadcasting Corporation.

[3] The coup failed. The Air force pilots that meant to bomb State House dropped their bombs over Mount Kenya and eventually, after ruling Kenya for a few hours, Hezekiah Ochuka, a soldier in the Kenya army, escaped to Tanzania. He was eventually extradited back to Kenya, found guilty at a high profile trial that involved both Oginga Odinga and Raila Odinga, and eventually executed in 1987.