After our early experience with baboons at lake Bogoria[1] many others followed.

Although we all know that animals in parks and reserves are wild and that they should be treated as such, there is a strong temptation to give them food either to attract them closer for a picture or because we believe -wrongly of course- that they need food “poor little things”! Because of that the animals expect to be fed and if they do not get it they look for it! In so doing, they become a pest and, as the situation worsens, they are destroyed by the wildlife authorities to protect the same people that sentenced them to death! Although the worse offenders are the primates, other species such as elephants and hyenas can also get rather daring and hazardous. 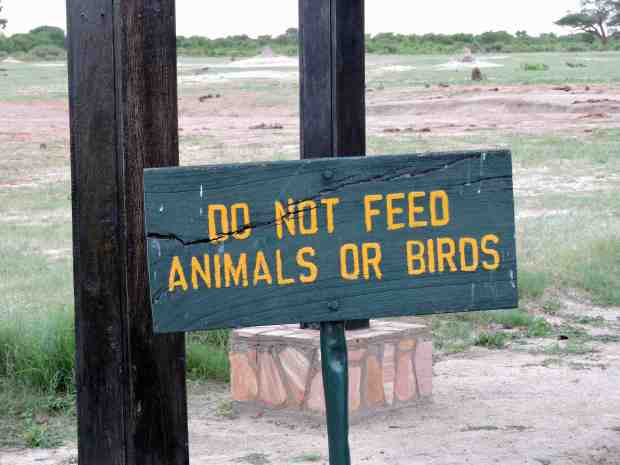 So, over the many years on safari you experience an encounter with monkeys almost every time you camp. Most of these are just commonplace incidents of small theft that get resolved by “common agreement”. Although not funny at the time, I recall one of the first we experienced when my wife, while walking in Mzima springs in Tsavo West, was aggressively approached by a troop of vervet monkeys that left her shaken but, luckily, not scared or discouraged about walking in the bush!

Sometimes, however, we had gone through some “special” encounters that are -I believe- worth mentioning and it is on a few of these that this posts focuses on.

Whether you stay at a fenced or unfenced camp does not make any difference for the monkeys: they are watching you, waiting for an opportunity!

Baboons keeping an eye on campers.

Most incidents take place on arrival, while the offloading of you car means open doors! The instant that you leave the car unattended for a few seconds, something is taken and it is often the only item of this kind you have! “There goes our butter for the fruit crumble”, or “we’ll drink coffee without sugar” are some of the remarks often heard while trying to cope with the incidents! In addition, to witness the various members of the party running after the interlopers shouting abuse at them is both funny and tragic as we have never recovered anything that had been taken!

Whispering instructions on how to proceed!

Although food is their usual target, we have lost various other objects to monkeys and I always remember the case of a friend whose wallet was taken at a hotel in Diani beach. She needed to follow the monkeys through the hotel’s garden collecting money and credit cards as, after tasting them, they dropped them! Unfortunately she could not pay her bill as her credit card showed a magnetic band with a tooth hole in it! My worst nightmare, however, is that they get the car keys and for this reason I never leave them unattended and always carry a spare key in my luggage, away from food. 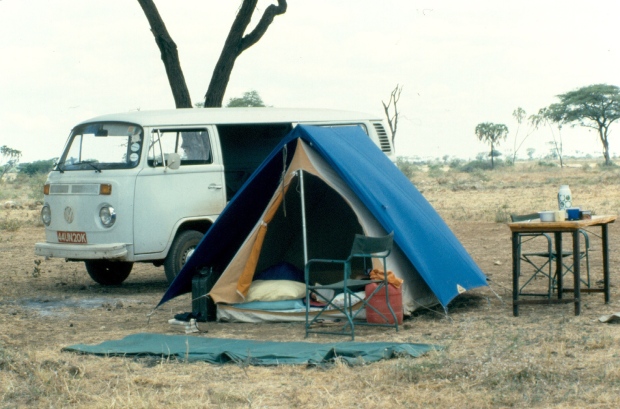 One of our early camps at Meru National Park, very vulnerable to monkey incursions. 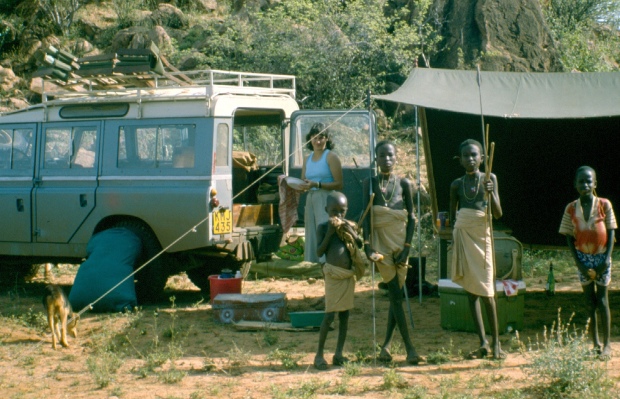 My first close encounter with a monkey took place at the Nairobi National Park in Kenya in the early 80’s. I was “monkey-naive” at the time. In the park there is an area known as Hippo Pools where you can leave your car and walk along the Athi River watching water birds and, if you are lucky, catch a glimpse of a hippo’s bottom. It was a warm afternoon and, at the time of getting out of the car, I was -stupidly you may correctly think- eating the universally-known favourite monkey food: a banana! I had not yet closed the door when I heard a slight noise in the tree above me and “magically” my banana was no longer! Once I recovered my wits, my surprise turned to anger when I realized that a vervet monkey was, far above me, enjoying its favourite meal!

A vervet monkey, a cousin of the one that took my banana!

Unbelievably enough, either I did not learn or I forgot this incident as some time later a similar but perhaps potentially more serious encounter took place at the Man-Eaters Petrol Station in the Mombasa road, a place hosting lots of baboons walking about. These are rather long-legged and slim animals that I believe to be yellow baboons (Papio cynocephalus). I was out of the car waiting for the tank to get full and walking about watching the baboons, this time I was -again unwisely- eating a packet of crisps! I was busy putting back the fuel cap when I first noticed the beast. A very tall and mean-looking male baboon was sizing me up.

I did not believe that it would do anything to an ape twice its size so I did not pay much notice of it. It was only when it kept coming that I realize that I could be in its sights! My suspicion was regrettably right but only partially. It was after my crisps and it looked seriously interested in them! I tried to scare the bully but it insisted and at some point it bared his teeth at me! I am not sure that you have come face to face with a large threating baboon but I am quite sure that you would have undergone the same reaction I did and surrendered whatever you had in your hands if that would make it go away! I offered it my crisps showing phony pleasure.

Despite my friendly, if forced offering, the brute had no manners and it snatched them rather violently from my hand and I would swear that it also slapped me on the face although this may have been a panic-driven sequel. Luckily for me, satisfied, the thief just turned its back on me and walked away casually disposing of the empty bag with its mouth overstuffed! All I could do was to wish (in other words, of course) that it suffered from a severe enteritis for the rest of the day!

Monkeys can also damage equipment and one of the first things the camper learns is not to leave food inside the tent when going for a walk or a game drive. Many first-time visitors are completely unaware of this and they are not forgiven! This was the case of a European couple at the now closed Serondela camp site at Chobe National Park in Botswana. It was our first time in that beautiful elephant heaven and, by then, we were monkey-wiser, but they were not and the baboons there were “tourist-wise” and excelled in their malice!

That time we took our baby daughter so we were extra careful with monkeys just in case. We got to Serondela -from Victoria Falls- at lunchtime and, after setting up camp and resting for a while, we went for an afternoon game drive leaving behind an empty tent. We had a great time by the riverfront but, as our daughter needed to be fed early, we came back to our camp. To get to our tent we needed to pass by the camp of the European couple. The place had been turned into mayhem by the baboons.

The beasts had reduced the tent to tatters and they had taken all their belongings out and scattered them far and wide. While the dominant monkeys ate, the lower ranking individuals waited performing acrobatic jumps between the tent and the trees! We managed to chase them away and collected what we could. It was a complete mess as the place had also been used as a toilet by the large troop!

After a while, shouts and lamentation heralded the arrival of our neighbours-victims. Moved, we walked over to offer help. We learnt that they had arrived from Europe a couple of days early and rented a car and camping gear. This was their first night camping in Africa and, clearly, not a very good start! However, they put a brave face to their predicament, washed and sorted out the usable stuff. Luckily, they still had part of their gear and food in the car with them and they could also sleep in it until the following day when they could get some new gear and food from Kasane, the nearest town.

In later years, when our family expanded to the four of us, our young son was given the job of “monkey slayer” and provided with a catapult and stones to perform his duties. Although he enjoyed the concept, his success was limited, not only because of his bad aim but also because he would tire fast and get easily distracted!

The “monkey-slayer” not doing his job!

So, the only solution is to prepare for them by being attentive as more violent means such as “stone throwing” or “scary” ones such as spreading rubber snakes all over the camp do not bring the expected results but only amusement to our relatives! 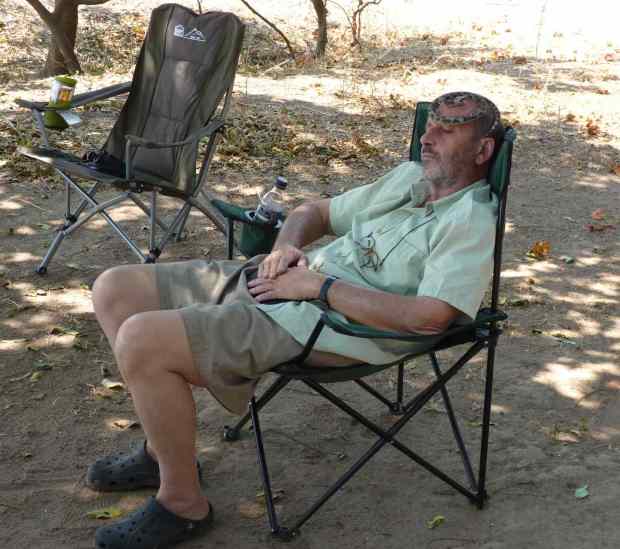 The latest anti-monkey technology -the rubber snake- protecting the bushsnob from at siesta time!