A visit to Lake Chivero Recreational Park, just over 30 km from Harare, does not sound like a grand outing when you have just come back from a family trip to Mana Pools and Hwange National Parks. However, it was a Sunday and our good friends Tom and Chizuki had time to share so we decided to explore the area and have a picnic lunch there.

Lake Chivero had some influence on our daughter’s life, the Senior Editor of this blog. My wife and I visited the area on 27 October 1990 and she still remembers that I had to help her to climb over the rocky terrain to see some of the San (Bushman) paintings as she was heavily pregnant. She claims, possibly with some justification, that this accelerated the arrival of our daughter the following day!

It was also at Chivero a few years later, when we were living in Zimbabwe, that our friend John invited our daughter -about eight years old then- to join him as part of a crew of two on a sailing regatta. We all went there and watched the race and also the moment when they capsized in the middle of the lake. We watched the events from the shore with great concern! Luckily, they managed to straightened the sailing craft and continued racing! This probably had something to do with our daughters’ love of the water and her keenness on sailing!

During the present visit we aimed for the game park area of the park as it was still unknown to us. We were aware that the park is somehow too close to the city so we did not have high expectations.

The total area of Lake Chivero Recreational Park is 6,100 hectares including the 16 km long lake. The animals that populate the game park, of about 1,900 hectares, came from Hwange National Park. Additional animals were brought in from Lake Kariba during the game rescue operation better known as “Operation Noah” that took place between 1958 and 1964.

We enjoyed watching several impala, tsessebe (Damaliscus lunatus lunatus), wildebeest, giraffe, zebra, wild pig and a slender mongoose as well as a number of ostriches and other birds. Busy watching animals we were, very soon it seemed, faced with our lunch! We decided to stop by the lake where the lodges are. The area was clean and the personnel very friendly. They pointed us to a viewpoint on the lake where we could have our sandwiches.

As soon as we stopped the car we were pleasantly surprised to hear a fish eagle (Haliaeetus vocifer), a call that we regard as the quintessence of the African wilderness. Usually fish eagles occur in pairs and their territories are large so you find them a good distance apart. What we saw in this area of the lake was different. There were many eagles and we estimated the number at between 40 and 50 birds, both adults and immature. They were all over the place, at the lakeshore, flying about and perched on the trees above and around us! 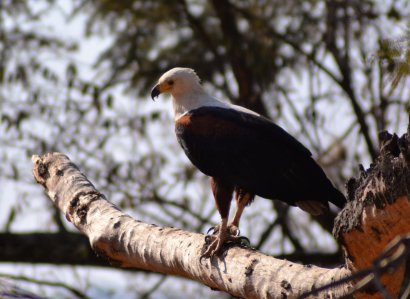 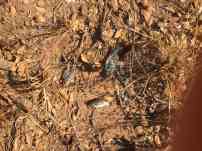 The fish discarded under the eagles. Picture credit: bushsnob.

A view of the lake shore from our picnic site. Picture by bushsnob.

At some point we noted fast forming ripples on the surface of the lake and,after a while, we realized that shoals of fish were responsible for them. The latter would take place spontaneously or when the walking marabous or the eagles scared them by either wading or flying over them. We observed lots of interaction between eagles and between them and the marabous, particularly when fishing. 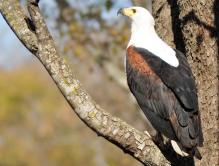 An area among the trees seemed to attract the attention of the eagles and, on close inspection, we found several dead fish that looked like Tilapia. Judging by the amount of guano present the spot was probably used for sleeping by some of the eagles.

Clearly there was a lot of fish at the lake and the eagles were profiting from it! It was by far the larges concentration of fish eagles I have ever seen and we were pleased to be able to watch them at close quarters. However, as this was the first time where we had seen such a congregation of fish eagles, I made a point to follow up the subject later.

Our lunch over we left the eagles thinking that a return visit to watch them at leisure would be justified. On our way out of the game park we were surprised to spot three white rhinos grazing placidly about 100 metres from us, a rare sight these days that added another justification for a re-visit!

Back home, searching the internet, I learnt that lake Chivero showed high levels of pollution in the 1970s but that the toxic levels had since declined. However, the lake is now highly eutrophic[1] and this, through the abundance of fish feeding on the increased amount of nutrients, has had a positive impact on the fish eagles’ increase in numbers[2].

Although the increase in nutrients may benefit bird populations -in our case the fish eagles- this may be at the expense of other species that require other -more fragile- resources that may be altered by nutrient changes and/or pollution and the overall environmental health may be in fact poorer[3].

So, what in principle appeared as a good thing, it may turn out badly for the lake habitat. It will be interesting to come back to the lake in a few years to see how things develop.

Below you will find four videos of what we heard and saw so that you can get the atmosphere at the lake that day.

A fish eagle flying over the lake shore and attempting to catch fish a few times. The response of the fish every time the bird approaches them can be seen as ripples on the water surface.

Fish moving ahead of the walking marabou storks.

Listen to the calls of the fish eagles!

[1] Euthropic (From Greek eutrophos = well-nourished). Eutrophication of a pond or lake arises from the oversupply of nutrients of various origins, which induces explosive growth of plants and algae.

[3] MacDonald, M.A. (2006). The indirect effects of increased nutrient inputs on birds in the UK: a review. RSPB Research Report 21. Royal Society for the Protection of Birds. 204p.