Boswell and Big V[1]  are the best-known elephant bulls in Mana Pools National Park. I recently reported about Boswell’s skills to feed on his hind legs[2], a rather unique trick. When we witnessed an elephant feeding on Acacia pods overhead and I reported in an earlier post[3] was Big V so I have already introduced both to you.

Mana Pools this August was extremely dry, as last year the rains were not good. For this reason the area looks more as it does towards the end of the dry season in November than it should be in August: a dust bowl! I believe that the animals are in for a tough two to three months until new rains arrive, if they do as these days weather patterns have changed.

Luckily for most of the animals in Mana the Zambezi River is there and, together with the pools that lend the name to the park, they provide water and fodder to keep the grazers going while the trees such as the apple-ring acacia (Faidherbia albida) will supply elephants with browsing. The animals that seemed hardest hit at the moment were the hippos that need to consume large amounts of grass so it was common to see them walking about during late afternoon already far from the water.

While checking in we learnt that lions had been spotted around an area known as Mana mouth. After recovering from the six-hour journey from Harare and, after unpacking and organizing our lodge, we decided to go there as it is close and the sunsets there are usually beautiful, even without lions! We never reach our destination as on our way we found Big V! 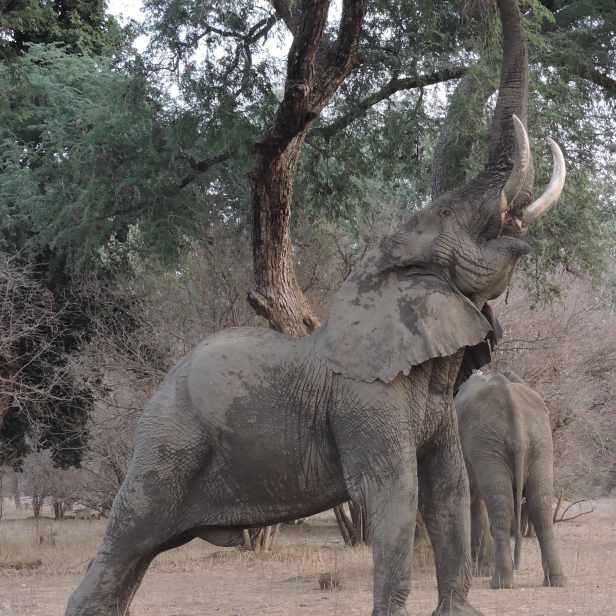 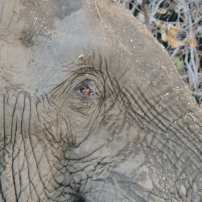 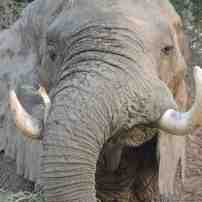 With him were, in addition to his usual young male retinue, a young female and its small calf, something unusual as large bulls tend to hang out on their own or with a few askaris[4]. He towered over the lot and he was clearly the undisputed leader of the group.

In an interesting contrast to his dominance over other elephants, Big V is an extremely relaxed elephant that allows the human observer to approach him either in the car or on foot. In contrast, the younger males can be more boisterous and occasionally perform threatening displays and mock charges that remind us that we are dealing with wild animals!

On this occasion it appeared that Big V was doing some “community” work by pulling down branches from an apple-ring acacia. Clearly, for the elephants this was the equivalent of eating at a Michelin-starred restaurant!

Although Big V was not standing on its hind legs “Boswell style” it stretched and reached high up the tree, to a height the others could not. As a result of its efforts large branches were brought down showing a great dexterity with his nose (it is easy to forget that he was breathing while doing this!) as well as the damage elephants can do to trees!

He will then fed on them, including the main branches, some of which were really thick! While Big V was eating, the other elephants were eager to collect any fallen pods or small branches but from a distance as Big V’s belly rumblings were sufficient to keep them all at bay! Well, not all…

The small female and her calf approached the feeding giant ignoring his rumblings. Expecting some rebuke we were surprised to see that they slowly got closer and closer  she started to steal bits of the branch to feed. The calf was also allowed into Big V’s inner circle and managed to pick some scraps. The large bull completely ignored them! 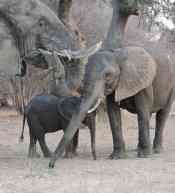 At one stage, the female even took bits of the branch from Big V’s mouth!

The reasons for this closeness I ignore but it was unexpected and we spent a few minutes watching how it developed. Spellbound with these interactions, we forgot about the lions and when the light was fading we returned to our lodge still talking about what amazing creatures elephants are!

[1] This elephant has a large v-shaped notch on its left ear.

[4] From Arabic, an askari was a local soldier serving in the armies of the European colonial powers in Africa. It is also used for security guards and the young bulls that accompany large bull elephants.