For hundreds of years humanity has discovered and classified the organisms that inhabit our planet. However, even today we continue to find new species. These are not tiny insects but fish, reptiles, birds and mammals, some even very large!

In 2004, while we were working there, United States scientists discovered a new species of monkey in the jungle of the Madidi National Park in Bolivia. The ape, of the group of the marmosets, was placed in the genus Callicebus. Following a novel initiative, its species naming was the result of a contest in Internet won by the Golden Palace Casino. This institution paid U$S 650,000[1] for the name Callicebus aureipalatii that -in Latin- means Golden Palace![2]

So far in 2016 several new species have been found. Some of them are small animals that can be considered difficult to see. However, this is not the case of the seven-metre long Black Whale defined as a new species this year. The finding is so recent that it still does not have its scientific name![3]

In addition, there is a new shark called Ninja lantern shark (Etmopterus benchleyi), found in the sea near Costa Rica in 2015.[4] Again, United States scientists studying aboard the Spanish research vessel Spanish B/O Miguel Oliver, discovered it. The species name refers to Peter Benchley, author of the novel Jaws.[5]

So far we have dealt with the amazing animals that have been discovered. But what about those animals suspected to exist but that we have not yet found? Cryptozoology is the study of animals -“cryptids”- that are believed to exist. The example that comes immediately to mind is “Nessie” the Loch Ness “monster” in Scotland that, despite a long search, continues to be the epitome of the elusive creature.

However, other instances exist of other beasts that had been seen but never confirmed. One of them is supposed to dwell in the Belgian Congo (now Democratic Republic of Congo) and the information comes from a professional hunter called R.J. Cunninghame. This experienced hunter became world famous when he shot dead a hippo that attacked the then US President Theodore Roosevelt while on safari in East Africa in 1909.

A Frenchman named Le Petit told Cunninghame about Water Elephants that he saw in 1907 during his five-year stay in the Congo. Le Petit saw them for the first time while traveling through the river in the wetlands between Lake Leopold II (now Lake Mai-Ndombe) and Lake Tumba.

The first time he saw just a head and a neck that appeared on the water surface. His companions, natives of the place, told him that what he had just seen was a Water Elephant. Later he saw the animals again. This time they were five and he allegedly watched them for about a minute. He described them as between 180-240cm tall with relatively short legs and curved backs, elephant-like.

The water elephant by artist and writer Philippe Coudray. Reprinted with permission of the author.

Their heads were ovoid and elongated with a short trunk of about 60cm in length (tapir-like), but no tusks were seen. Their skin reminded him of hippo skin but it was darker. They walked with an “elephantine” gait that left footprints in the sand with four separate toes. This was the last time they were seen as they quickly disappeared into deep water. His fellow local companions reaffirmed Le Petit that the animals were common in that area and that they spent much time in the water, like hippos.

Interestingly, in the same general area another animal is reputed to exist, known as the Mokele-Mbembe, a creature believed by cryptozoologists to have a prehistoric look similar to “Nessie”. Although several expeditions have searched this area of the Congo, none have found it or the Water Elephant.

However, the Water Elephant existence came to the fore again when in 2005 a pilot flying over Lake Tumba apparently spotted them again. The animals seen would fit the description of Le Petit!

Not many scientists believe that a beast of this size can still be unknown to science. However, the Congo region -like Bolivia and others- has surprised us earlier with the discovery of other interesting creatures. You may also think that what Le Petit saw were African Forest Elephants (Loxodonta cyclotis), considered as pygmy elephants for quite some time but now as small specimens of L. cyclotis. This is unlikely for an experienced observer.

Le Petit’s description would fit that of the Moeritherium if the latter had been taller than its estimated one metre height.[6] Philippe Coudray, who I thank for his permission to use his picture of the Water Elephant, theorizes that elephants regarded as extinct -such as the Water Elephant- could still exist. He bases its reasoning on the finding of a tusk with a reverse curvature to normal elephants in 1904 in Ethiopia. The fact that the tusk was not fossilized would indicate that the animal did not live so long ago. The cryptid species postulated would be smaller than a prehistoric elephant known as the Deinotherium.

During our safaris we have seen elephants with weird-looking tusks. 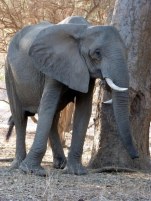 THis year, while visiting the Kruger National Park, we spotted an elephant with one of its tusks pointing downwards so these tusks are still on live elephants! It reminded me of the Deinotherium-like cryptid!

Did the Water Elephant ever exist or what Le Petit saw were the smaller forest elephants? The area of Congo where they could be is still difficult to access so a final solution to the mystery may yet take a long time. In the meantime we can only wait.

[1] Donated to the Madidi National Park.

Note: This post is a translation and adaptation of an article published in the Spanish on-line Muy Interesante magazine. If interested see: http://www.muyinteresante.es/naturaleza/articulo/el-elefante-de-agua-y-otros-animales-que-no-sabemos-si-existen-721474540407