There are incidents in life that have a strong influence in the future and although the improper use of a microhaematocrit centrifuge may not be the commonest of examples, it had an impact on mine.

In short, while working at a colleague’s laboratory in Muguga, I forgot to place the inner lid over the blood-filled capillaries. The result of a short spin -I switched the machine off immediately- was a bloodstain at tummy height all around, including the people present! Basil, the Head of the Laboratory while watching his own red mark at waist level, made only one comment in the best British understated style: “Julio, you need a PhD” and abandoned the room leaving me alone to clean up the mess!

My usual “laboratory”, quite far from Basil’s!

Basil’s words sunk in my mind and I decided to attempt a PhD as, clearly, I needed more scientific training, in addition to learn how to properly use a microhaematocrit centrifuge! Through a Muguga colleague I managed to get in touch with Cambridge University in the UK where I was -to my surprise- accepted. Unfortunately my initial enthusiasm got quickly dampened when I learnt about the university fees and the option was quickly discarded.

After more enquiries I learnt that I could do a PhD as an external student at my former Department of Applied Zoology of the University of Wales. So, very soon, I had organized the study at a small fraction of the cost. Luckily Ian, a Lecturer and friend from the Department, agreed to be my external supervisor while my ICIPE colleague Robin kindly agreed -apart from being my tick ecology teacher- to take on the day-to-day supervision of my work.

The rules of the PhD were very strict and they included a visit by the external supervisor to Kenya. Fortunately, Ian planned to present a scientific paper at an International Protozoology Conference[1] held in Nairobi in 1985 and the time was very suitable for the review of my work.

Ian, right, and a smart Bushsnob attending the Conference.

Most of my fieldwork was carried out at Intona ranch[2] in the Transmara. So, when the time for Ian to come to oversee my work, apart from the more routine visits to the main ICIPE office in Nairobi and to our Muguga laboratory, the exciting part was a trip to Intona itself. In those days, the Transmara area was an uncommon and rather exciting destination in Kenya.

As usual, the trip required some organizing, particularly as I did not wish to give a bad impression to my Supervisor during his only review of my work! I got authorization from the always kind Murumbis to stay at the main house at the ranch and to get their staff to look after us. 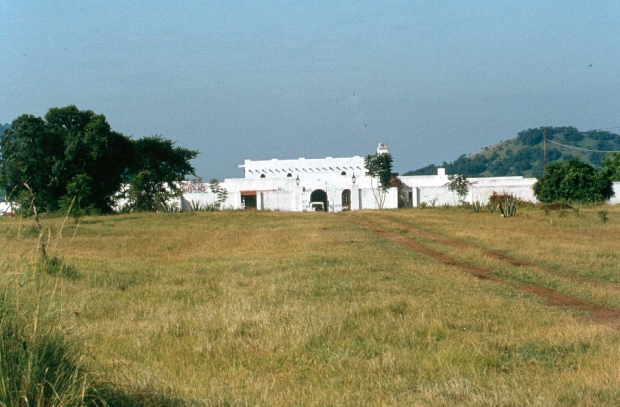 The main house at Intona ranch.

The one-day journey to Intona was an enjoyable one as we drove by the Maasai Mara Game Reserve where animales were always very abundant and then crossed the bridge over the Mara river to climb the Oloololo escarpment through Lolgorian to, finally, get to the ranch where we settled down and spent the next three days looking at our trials and analyzing my data. 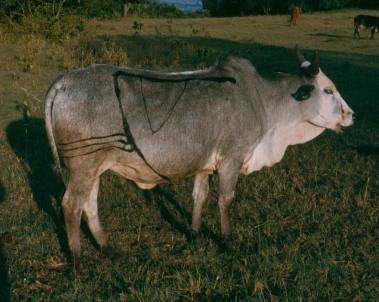 Images of the journey, above and, below, some of the work we reviewed at Intona ranch.

The afternoon of the day after arriving, knowing that Ian was a great tea drinker[3], I decided to treat him to some five o’clock tea at the house’s back verandah where there was not only a beautiful view of the parkland and wildlife surrounding the house but also some very snug chairs.

I asked the cook to use some good Kenya tea I had brought for the occasion and we sat to chat, waiting for the fresh brew to arrive. We did not wait for long before the teapot came with the necessary milk and sugar. Tea was served while we contemplated the various art objects that decorated the verandah while the cook -trained by Sheila- discreetly withdrew.

I poured the tea and the milk and drank it while enjoying the both the taste as well as the view while Ian drank his. We talked about the journey and the animals we had seen, particularly during our stopover at the Maasai Mara but also during our trip when close to Intona. Seeing that Ian had finished his cup, I offered him more. To my great surprise, he politely declined!

When I insisted, making a comment about the tea being good, Ian mentioned that he found it with smoky flavour that he found rather unusual and too strong to his liking. Then I realized that our milk supplier was a Maasai lady from a manyatta nearby and, when I had a look at the milk, I confirmed that I had overlooked a detail: the milk was grey with a rim of dark froth!

With my apologies, I confessed to Ian that, in my enthusiasm to treat him to a proper “cuppa”, I had overlooked that our milk came from the Maasai who added a few pieces of charcoal to the milk gourd! Although Ian did not change his mind regarding drinking a second cup, he was very amused about the reason for the smoky flavour.

Although I knew that a few drops of cow urine were also added as a preservative to the milk, I did not mention it to Ian!

[3] His favourite saying was: “Whenever there is a crisis, have a cup of tea. Many times the problem goes away after that”.