While living in Maputo (Mozambique) we rented a house that came with a gardener, as it is usually the case very in these places. His name was Erasmus and he was a very easy-going and religious young man. Often in the afternoon we were regularly treated to a choir of holy hymns when he and the afternoon security guard sang together. We later learnt that they were at the choir at the same church and they were rehearsing. I must admit that -as it is the norm in Africa- they sang very well.

The house was built in an area of Maputo liable to flooding and, perhaps because of the humidity and heat, we had a serious problem with flies. The latter became an issue during the rainy season, despite us keeping all rubbish in sealed containers that were removed regularly.

After some search we found the solution: a flytrap, a transparent plastic contraption that, when filled with a smelly solution, would attract flies to it where, unable to escape, they would die. 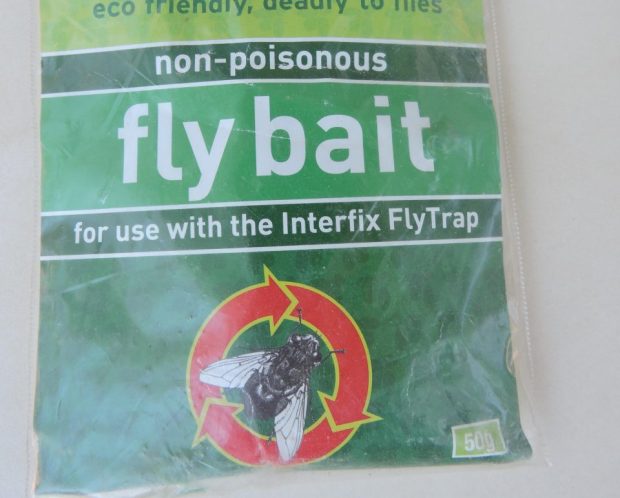 In consultation with Odette, our housemaid, the trap was placed by the kitchen door with the objective of intercepting the flies before getting into the house. The siting was an instant success as, after a few days, flies began to get trapped. Then we confronted a problem: the smell! It gradually increased as more flies accumulated and soon Odette started to make remarks about the fedor[1] that started to emanate from the offending trap. 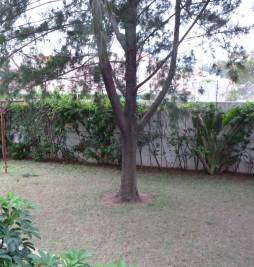 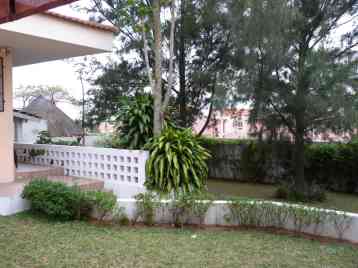 View of the garden and the casuarina tree where the trap was hanged at the end.

After a couple of days of putting up with the stink, Odette moved the trap away from the house without opposition as, despite being of small complexion, she was clearly in charge of the household personnel by virtue of being the employee closest to us.

The trap stayed in the new location, close to the security guards’ changing quarters, for a few days until they staged a “mini demo” to protest about the stench and Odette agreed to hang it far away, under a casuarina tree where its smell did not interfere with anyone.

Peace restored, the contraption continued to hammer the flies but soon it filled to near bursting point and it became less effective as no more flies would be able to get in anymore. So, Odette stroke again! She asked Erasmus to empty it. Poor old Erasmus had no option but to accept Odette’s request, being her sidekick.

The above background to this saga has been reconstructed afterwards talking to the various participants and witnesses as at the time I still had working duties.

I was at home when I heard a strange noise in the garden and went out to investigate. I saw Odette overseeing Erasmus work from a prudent distance. Erasmus -looking quite sick- was busy emptying the trap while pausing frequently to move away and take deep breaths of pure air while trying to keep his lunch down! Eventually, the job was done and Erasmus started to look his normal self while Odette looked rather amused! I am sure that it was probably his toughest assignment ever.

It was a very quiet Erasmus that walked past after completing the cleaning and that got into the toilet. It was too evident that he needed a long shower to be allowed on public transport to get back home!

After the operation, the trap was not cleaned again, a decision that I suspect followed some hard bargaining between Erasmus and Odette. In 2013 I retired and we left Maputo so the flytrap was packed away and it disappeared from our memories. Since then we have commuted between Uruguay, Argentina and Zimbabwe, avoiding the winter as much as possible.

Harare, being at about 1,500m of altitude has an extremely pleasant climate and it is almost fly- and mosquito-free for most of the year but some flies start to appear just before the rains and their numbers increase when it gets wet. Last year (2016) , the rains started on time and the flies were more numerous than normal.

A consensus was reached between my wife and Stephen -our caretaker- that preventive action was indicated to keep the flies in check. So, lo and behold, the infamous flytrap re-appeared! I immediately remembered Erasmus and felt sorry for Stephen but kept quiet… 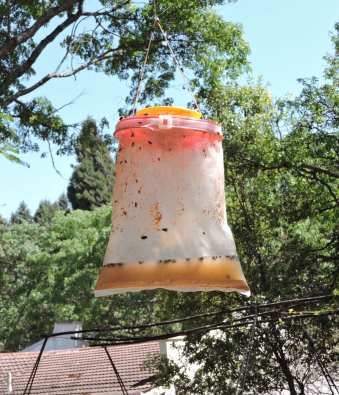 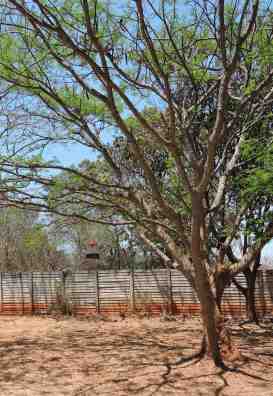 This time, as experienced users and with the benefit of hindsight, we placed the trap far from all forms of human and pet habitation and positive results did not take long as the trap had not lost any of its effectiveness. Flies came in in numbers, again probably from the whole of our neighbourhood and, as it happened in Maputo, after about a week, it was obvious that a cleanup was needed.

My thoughts immediately went to Stephen and I was totally taken by surprise when my wife asked me to do the cleaning! “What about Stephen?” was my immediate response. “He is going to the rural area tomorrow, to prepare the land for planting” was her reply. I found this as a very suspect situation and I even thought that Erasmus had intervened in a long-distance revenge!

So it was the trap and I! I decided to take the only course of action left to me: my often practiced procrastination to see if I could last until Stephen’s return and delegate the task to him. To my regret I failed as some flies were spotted in the kitchen despite my efforts to kill and hide the corpses.

So, like Erasmus before me, I braved the cleanup. I have to confess that I had an advantage over Erasmus as my training and practice as a veterinarian had exposed me to a variety of emanations from decomposing nature. I also found a good face mask (from the times of the flu pandemic scare!) that I decided to wear, apart from rubber gloves.

When I believed I was ready, I went for it! Remembering Erasmus, I refrained from eating prior to the event. I unhooked the trap from the tree without major problems and I sprayed its contents with insecticide to kill the flies that were still alive inside. Emptying it was not as easy as it looked. Being lazy I tried to do it without removing the lid but this was not possible. Opening it became inevitable. 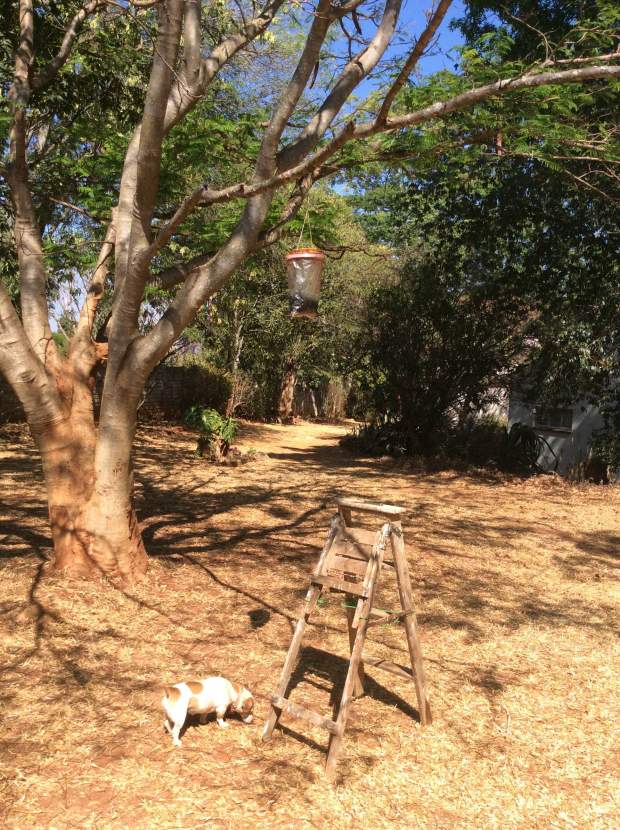 This action created a blast of malodorous miasma that hit my covered nostrils at full blast. The smell nearly knocked me off my feet and I decided that it was time for a pause to think (read “to keep all my innards in their right places”). At that stage I remember poor old Erasmus again as even the photographer used a powerful zoom to take the shots shown! 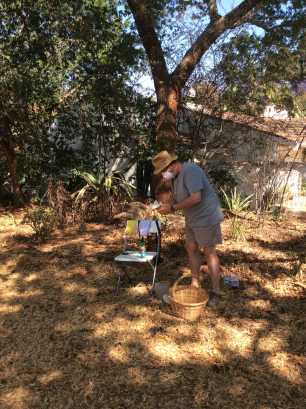 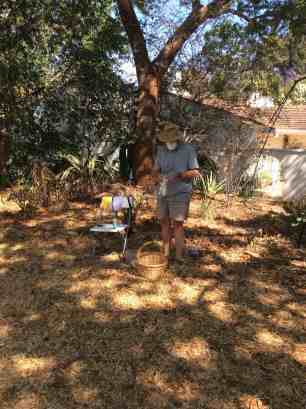 The pause worked and I managed to empty the trap from its burden and re-charge it with fresh water and powder so that it could continue functioning. I was quite happy to set it up again as I knew that the next cleanup would fall on Stephen and it would be my time to watch! 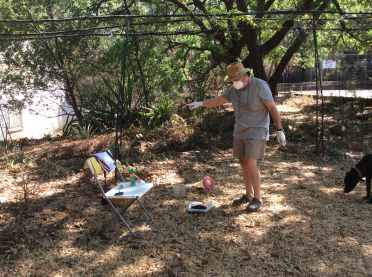 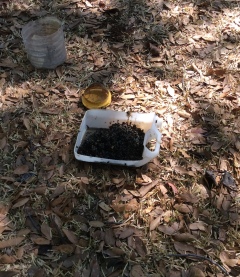 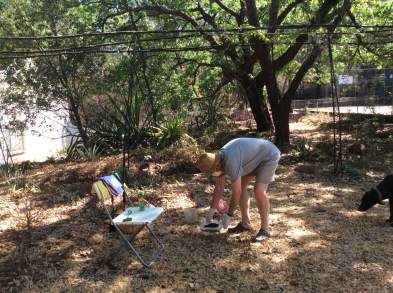 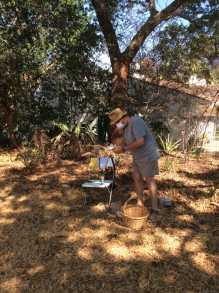 After hanging the newly-charged contraption I needed to dispose of the fly bodies by burying them as recommended to prevent any flies’ eggs from hatching. As an added precaution I also sprayed the fly mass with an insecticide and buried them deep. 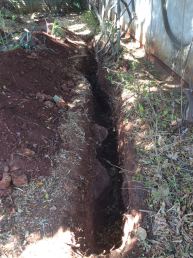 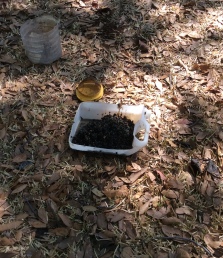 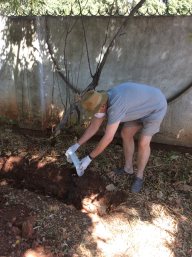 The procedure over, I was triumphant for a while, until flies started to come towards me, mistaking me for the trap (now clean and smell-less) as I must have stunk badly although I was unable to smell anything at the time and for a while afterwards. Flies still followed me into the house when I entered to have a badly needed shower.