We “learnt” lots of the secrets of camping in Africa from our friend Paul, another veterinarian working at Muguga, Kenya. Soon we had broken the barrier of “camping among the beasts” as most campsites in Kenya were unfenced. We often visited Paul during his long spells residing in the bush while working in the various national parks and/or in the fringes of parks and game reserves. 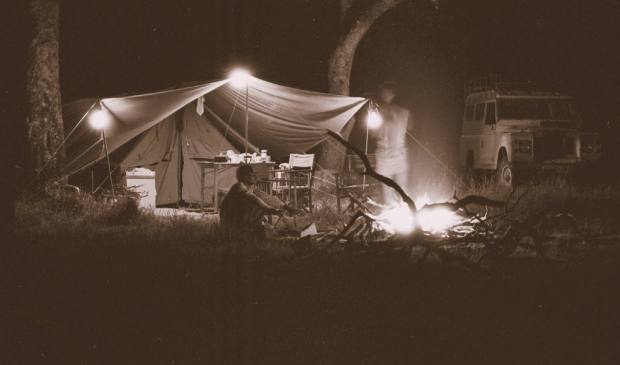 One of Paul’s camp sites in the Maasai Mara. His camp hand Tobias is on the left.

It was great fun and we soon started to go at it alone. Preparations included the procurement of a few second hand camping items that, apart from a small tent, a couple of chairs and a foldable table, included a large frying pan with an extremely long handle, as my wife did not and still does not enjoy cooking at the fire. For working purposes, I could use a large ICIPE tent that added great comfort to our outdoor lives. 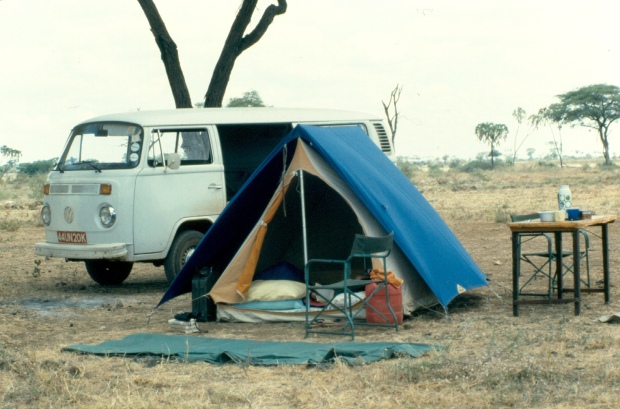 While in Kenya we practiced “basic” camping! 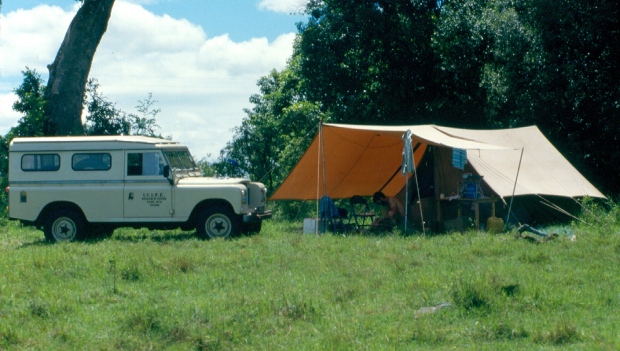 Working camping was still basic but we had the advantage of a large tent.

Our most frequent camping destination was the Maasai Mara where not only Paul often worked but it was an area I needed to drive through on my way to Intona ranch in the Transmara where I was working with ticks and tick-borne diseases as explained earlier[1]. Luckily my work took us there regularly as I needed to supervise the on-going observations as as well as to bring new personnel to be stationed at the ranch.

Camping in the Maasai Mara very often involved close encounters with different animals and you needed to be alert at all times as elephants and buffalo were present in large numbers, in addition to the normal and harmless savanna dwellers such as giraffe and the various antelopes. Although leopards were quite rare, the place was a predators’ playground.

The Mara-Serengeti area is world famous for the annual migration of wildebeest and zebra and luckily we witnessed this unique event several years (in fact we watched it every year while in Kenya!). The richness of easy prey is matched by an equal abundance of predators. Lions were a common find and spotted hyenas were really plentiful. So, our camping regularly had some exciting moments, particularly after dark!

From the start we learnt that we were safe (well, as safe as we could be) while inside our tents and we were always extremely careful when moving around camp, particularly when light started to fade. Although some friends preferred to keep fires burning all night, we did not but whether this has an effect on nocturnal visitors I do not know. All I know is that rhinos are believed to stamp out campfires, a fact I could not corroborate as rhinos were already few in the 80’s[2].

Helen was the daughter of a well-known veterinarian from the UK that had come to spend some time in Kenya[3]. We met her at a social event and, as she was looking for opportunities to travel around, I invited her to join my wife and I on one of our regular trips to the Transmara. She immediately accepted the offer.

So, as arranged, we picked Helen up one early morning as the journey was a long one over rough roads and we wanted to arrive to the shores of the Mara River, adjacent to the Maasai Mara, early as this would enable us to go for a short game drive with Helen.

I had an agreement with the Mara Buffalo Camp to stay close to them and I was also kindly allowed to use their facilities. Usually we would arrive at our Mara margin campsite with just enough light left to set-up camp, dine and go to bed. Sometimes our departure from Muguga would get delayed and we would arrive after dark and needed to set up our tent with the car lights!

We would then spend the following day driving to Intona where we would usually camp in the ranch for two or three nights while the work was done and return without stopping all the way back to Nairobi because I had another on-going trial in Muguga and time was quite short.

The journey with Helen went as planned and we arrived in good time. After setting up camp, by mid afternoon we went for a game drive to show some of the beautiful Maasai Mara and its animals to her. We saw most of the usual plains game but failed to find any predators, apart from the ubiquitous spotted hyenas that were extremely common in the area.

A spotted hyena dealing with a wildebeest carcass.

Tired from the long journey and the additional game drive, our dinner was a quick affair and we were in our tents rather early as we had another journey the following day whose duration was difficult to predict as we needed to negotiate some bad roads that were often muddy and slippery.

While laying on our camp beds, as usual, the lions started to roar far away and we called Helen’s attention towards them. She was very excited to hear them but soon our exchanges got interrupted by sleep.

I am not sure at what time the lions’ roars woke us up but probably it was midnight or perhaps later. We could hear several lions getting closer as their growls gradually got louder. We estimated that they were probably coming along the river although we could not be sure. I did not wish to open the tent door to have a look for fear of attracting unwanted attention so we could only imagine the lions approaching our camp!

After a few more minutes of stillness during which my wife and I waited with bated breath, the visitors arrived, preceded by loud roaring a few seconds earlier and followed by the noise of “flying hooves”. The rumpus did not last more than a couple of minutes as, apparently, the lions were -we also assumed- going for a herd of zebra and/or wildebeest although we did not hear them calling. We did hear a few items being knocked over in the process and then the animals left, luckily.

Only then we remembered Helen! We shouted at her telling her not to move from her tent but, although we tried to get an answer from her, we failed. Concerned, I shone the torch in the direction of her tent and I was relieved to see that it was still intact although I could confirm that some of our belongings had indeed suffered the consequences of the tresspasers!

As the animals moved off, we gradually relaxed and decided to leave things for the morrow as Helen was surely fine and tidying up the camp could wait. I only hoped that she would not decide to go to the toilet before daylight. So it was back to a rather fitful sleep but nothing else disturbed us that night.

The Oloololo escarpment as a spectacular backdrop for a zebra herd, Maasai Mara.

The following morning, while water was on the fire, we gathered table, chairs, towels and a few other minor items while we checked the abundant footprints in an attempt to unravel the events of the night. The conclusion was that several lions had been there chasing zebras through our camp as we failed to find wildebeest prints. The kill, if any, had taken place somewhere else and we decided to look for it afterwards on our way to Intona.

One of the prides resident near our camping area in the Maasai Mara.

While we were busy around camp, we heard “Good morning” and we saw Helen emerging from her small tent. Only at that point I paid attention to her tent and felt relieved that it was still intact. It was one of these mountaineering jobs, low on the ground and of a bright blue colour! Helen looked well rested and asked us what we were doing. “We are looking at the spoor, trying to understand what happened last night” I replied. Helen gave me a look of confusion and said: “why, what happened? I slept all night and even did not go to the toilet!” 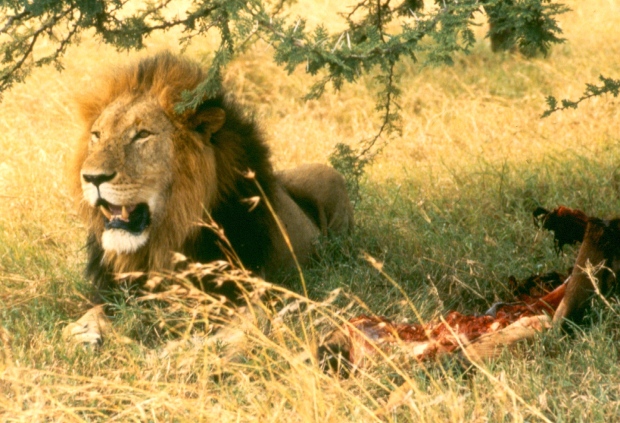 A male lion feeding on a topi kill at the Maasai Mara.

I was quite relieved by her ignorance of the facts and felt tempted not to say anything but I thought the truth should be voiced so I told her the whole story. Her eyes got larger as I talked and at first she had doubts about my story so I had to show her the footprints of the various animals and, eventually, she believed me and she was both concerned but also disappointed to have missed the action!

Although we took a detour looking for a possible kill nearby, we failed to find any traces of neither prey nor predators, although we knew they were watching us!

A zebra kill at the Maasai Mara.

[2] I leave the research about whether this is true or not to you as Google does not seem to give a straight answer.

[3] Years later, her father was the External examiner of my PhD Thesis.